Prepare for the Real (Presence) Disaster 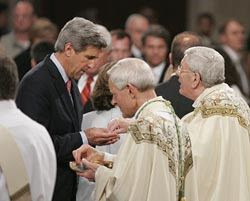 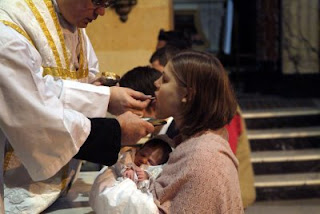 I am usually a little skeptical about government-hyped impending disasters, especially when the "inevitability" of such disasters allows the government to exercise extraordinary powers. Enter the so-called Bird Flu pandemic.
The plans of various federal, state and local agencies to control the population-- oops, I mean, to control the spread of disease-- are not the subject of this post, nor this blog, for that matter.
What does concern me is the reaction of Holy Mother Church in the face of these disaster preparedness plans. The following excerpts are taken from a story in the Canadian Catholic News this February. My comments follow.
Canadian Catholic News: Archdiocese prepares for flu pandemic, guidelines reveal Communion restrictions
By Glen Argan2/16/2007
Canadian Catholic News - (www.cathnews.net)

EDMONTON, Canada (CCN/Western Catholic Reporter) – Since an influenza pandemic could be on its way, the Edmonton Archdiocese is out to make sure its ready for such a disaster.

If a pandemic hits, local Catholics will not receive Communion from the chalice and will not be able to receive the body of Christ on their tongues. There would be no confession in enclosed confessionals and confession would be held with the confessor and penitent sitting at least a meter (about three feet) apart, each wearing face masks.

In a worst case scenario, church services would be cancelled altogether.

. . .
Those are just some of the stipulations laid out in a draft of Archdiocesan Influenza Pandemic Planning Guidelines now being circulated.
"The only thing tougher than planning for a disaster is explaining why you didn't," said Rita Sandmaier, the pastoral-care minister who drew up the draft guidelines.

The distribution of Communion will be greatly affected under the proposed guidelines. Those who handle hosts prior to Mass will have to wear disposable gloves and masks.

As well, there will be no blessings given to non-communicants.

Under the draft guidelines, the church may move to "alternate forms of worship" for Sundays. Parishioners will be reminded of the duty to keep Sundays holy. If public gatherings are banned, a simple Liturgy of the Word will be distributed to parishioners.

"Some of this sounds drastic to me,” Sandmaier told the group. “It sounds very science fiction; it sounds over the top."

A pandemic could last from a few days to several months, she said. "But the life of the church just can't stop for a year."
My comments:

I am a little mystified at the readiness of the Diocese in question to end the normative practice of receiving Our Lord on the tongue. I don't understand how applying the Host to the tongue carries a greater risk than applying It to the hand. Both the mouth and the hand can carry germs and disease. There is no greater risk of the Priest touching the tongue than touching the hand. And, of course, none of this acknowledges the Presence of Christ and whether He would allow the spread of disease in this most important Sacrament-- the source and summit of the Catholic faith, according to the recent council.

As if this policy doesn't cater to our masters in the government enough, hey, let's just forget Mass altogether! Our handy pastoral assistants can hand out "liturgies of the Word". Why would we ever take risks for our faith? Why risk our health when all we get is the Body, Blood, Soul and Divinity of Christ? This, to me anyway, seems a far cry from the faith of the Middle Ages, the faith of the persecuted Roman Catholics in days of empire, and a far cry from the horrors faced by the faithful in China today.

Another mystifying part of this plan is the ending of blessings for non-communicants. I don't mind this theologically/liturgically, but it just makes no sense at all from the health perspective. The Priest doesn't even need to touch anyone to impart a blessing.

And of course, what a great idea to give ANOTHER reason to refrain from going to confession.

I would encourage anyone who reads this to contact their Diocese (preferably at the Vicar General level) to ask some questions about its plans for handling the dreaded Bird Flu.

Full story found here: http://www.catholic.org/international/international_story.php?id=23071
Posted by thetimman at 7:53 AM

All I can think of is Damian helping the lepers without worrying about contracting leprosy himself.

Canada is know for its eccentricites. I would hope and pray that the USA wouldn't be that ridiculous. I would rather be dead from the Bird flu than go through that desecration of our Lord.