Statements of the Institute of Christ the King, Sovereign Priest on the Release of Summorum Pontificum

Te Deum in Thanksgiving for the Motu Proprio Summorum Pontificum Cura at the Solemn High Mass this Sunday, July 8, 2007 at 10:am 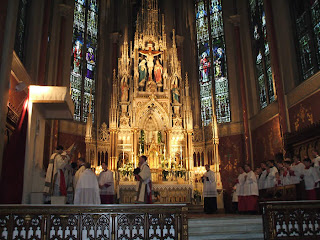 It is with profound gratitude and spiritual joy that we learned today about the publication of Pope Benedict XVI's Apostolic Letter Summorum Ponitficum. This Apostolic Letter given on the Holy Father's own initiative (motu proprio) expresses the great pastoral care, love and understanding of our beloved Pope not only for the faithful attached to the classic form of the Latin Liturgy, but to the unbroken tradition of Holy Mother Church. In his document the Holy Father underlines the importance and the normality of the presence of the traditional liturgy in the Church for its vitality: "...The sacred liturgy according to the Roman manner made fertile not only the faith and piety but also the culture of many peoples. Moreover it is evident that the Latin Liturgy in its various forms has stimulated in the spiritual life very many Saints in every century of the Christian age and strengthened in the virtue of religion so many peoples and made fertile their piety."

We are particularly blessed in St. Louis because our beloved Archbishop has shared this intention of the Holy Father already for a long time and in a certain way also anticipated it by the foundation of St. Francis de Sales Oratory, which he entrusted to the pastoral care of the Institute of Christ the King Sovereign Priest. Most recently the Archbishop expressed again his esteem for the traditional forms of liturgy when he ordained two new priests for our Institute three weeks ago at the Cathedral Basilica.

Therefore, the publication of the Motu Proprio is a great occasion of thanksgiving for the generosity of our shepherds and for the fact that the richness of the Church's tradition has been brought back to the daily life of the Church. This Sunday, July 8, at the end of the 10 am Solemn High Mass we will sing the Te Deum, the great thanksgiving hymn of the Church. We invite you to join us on this occasion. Your presence would be a strong sign of esteem for the Holy Father and our Archbishop, but also to the work of our institute and its superiors who have shared the intentions of the Holy Father when they were not as common in the church as they are today.


It is a particular joy, that the Holy Father quotes in his Motu Proprio several times St. Prosper of Aquitaine (ca. 390-455), patron of Catholic writers and journalists, whose relics are venerated at St. Francis de Sales Oratory . The Motu Proprio quotes several times one of St. Prosper’s most famous aphorisms: Lex orandi - lex credendi, the order of prayer is the order of faith, which reflects the inner and reciprocal unity between the liturgy as the prayer of the whole Church and the identity of the Church in its faith: "As from time immemorial so in the future the principle shall be respected “according to which each particular Church must be in accord with the universal Church not only regarding the doctrine of the faith and sacramental signs, but also as to the usages universally handed down by apostolic and unbroken tradition. These are to be maintained not only so that errors may be avoided, but also so that the faith may be passed on in its integrity, since the Church's rule of prayer (lex orandi) corresponds to her rule of belief (lex credendi).”"

With my best regards and the assurance of my prayers

Yours devotedly in Christ the King,

Next, a sermon on the occasion of the release of the Motu Proprio, by Monsignor R. Michael Schmitz, U.S. Provincial of the Institute.

Statements from the ICRSP's U.S. headquarters found here, on their main page, with a link to their press release here.
Posted by thetimman at 2:36 PM