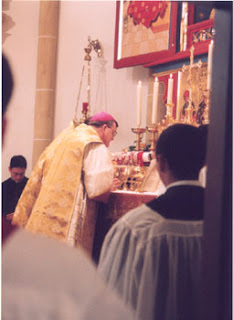 Yes, that headline is correct. Good news breaks out all over. The Catholic News Service, the information arm of the U.S. Conference of Catholic Bishops, has published a fairly helpful story with resources for those who may be unfamiliar with the traditional Mass.

Excerpts from the copyrighted full story, with my comments in green:


Internet offers resources for those interested in Tridentine rite

By Cindy Wooden
Catholic News ServiceVATICAN CITY (CNS) -- Libraries and the neglected corners of sacristy closets may not be the best place to find resources for taking advantage of expanded permission to use the 1962 edition of the Roman Missal for the Tridentine Mass.

In the age of Internet, online bookstores and online auctions may be the easiest way to find copies of the 1962 rite for the celebrant, Latin-English missals for members of the congregation and explanatory videos for all.

A June 29 search for "Tridentine Mass" on YouTube, the Internet video site, came up with 109 search results, many of them for five- to 10-minute segments of the Mass meant to be viewed in succession. But it also included a 54-minute video of a 1941 Easter Mass celebrated in Chicago, with commentary by the future Archbishop Fulton J. Sheen.

The site featured other full-length Tridentine Masses filmed in the United States, France, Poland and elsewhere. (As posted earlier on this site, the ICRSP is coming out with a video of the glorious ordinations by Archbishop Burke very soon, click here to place order.)

Often, like with the video of a Tridentine Mass celebrated March 7 in the Cathedral Basilica of St. Louis, the accompanying explanation makes clear that the Mass was authorized. (St. Louis has been the beneficiary of a lot of traditional Mass buzz lately. The March 7, 2007 Mass was a solemn high Mass on the Feast of St. Thomas Aquinas, co-patron of the Institute of Christ the King, Sovereign Priest, celebrated by Fr. Karl Lenhardt, Rector of St. Francis de Sales Oratory. This, and not the recent ICRSP ordinations, was actually the first TLM at the Cathedral Basilica in nearly 40 years.)

[...]In addition to used copies of the 1962 Roman Missal available from online auction sites, several online bookstores in North America, Great Britain and Australia sell reprinted editions, both for use at the altar and by the congregation. The congregational edition usually contains the Latin text and an English translation.

Like the videos, some of the missals have been published by people connected to the Society of St. Pius X; others carry the permission of a local bishop.

For example, the "Catholic Home and Garden" online bookstore -- http://www.catholichomeshop.com/ -- says its 1962 "Catholic Daily Missal," the $56 version for the faithful, was reprinted with the permission of Bishop Fabian Bruskewitz of Lincoln, Neb. (The Missal referred to here is the Baronius Press Missal, which can also be purchased at baroniuspress.com. The other 1962 Missal completely reprinted and typeset is the Roman Catholic Daily Missal published by Angelus Press. Both are very fine Missals.)

The site also sells a $325 reproduction of the 1962 "altar missal," which it said was approved by the late Cardinal John J. O'Connor of New York.

The 1962 Order of the Mass, which contains the prayers used at every Mass -- such as the Gloria, the creed and the Eucharistic prayers -- but not those that change according to the liturgical calendar, is available free online from www.sacred-texts.com. (I clicked on this link but it did not appear to be a Catholic site, so I won't link it here.)

The Latin Mass Society of England and Wales -- http://www.latin-mass-society.org/ -- offers a variety of step-by-step training manuals free online. The manuals include small booklets for altar servers ("How to Serve the Old Mass") and for members of the congregation ("Standing, Sitting, Kneeling"), as well as a lengthy guide for priests on celebrating the Mass according to the 1962 missal. (The Latin Mass Society does have a ton of great resources at the link above.)

They also offer free online the "Plain Man's Guide to Latin," which not only contains a pronunciation guide -- providing the Latin creed phonetically -- but also an explanation of the prayers of the 1962 missal.

With the approval of the Catholic Bishops' Conference of England and Wales, the Latin Mass Society also is sponsoring a three-day training conference in late August to teach priests from England and Wales how to celebrate the Tridentine Mass. (The FSSP and Una Voce have been conducting TLM workshops for priests as well, as has the ICRSP. Click on the Una Voce, FSSP or Institute of Christ the King links on the right for information.)

The society's Web site also offers a variety of videotapes and DVDs showing the Tridentine Mass.

"The Most Beautiful Thing This Side of Heaven," a video that offers a step-by-step explanation of the liturgy and comes with an explanatory booklet, can be ordered online from http://www.ecclesiadei.org/.

All in all, a very positive story with helpful links for those Catholics becoming interested in the Mass. The thaw is in full swing; maybe the new springtime is on the way at last.
Posted by thetimman at 10:13 PM

I understand that the Cannons Regular of the New Jerusalem actually said their Traditional Latin Masses at the Cathedral Basilica when they first moved to St. Louis. So, I am not sure it is correct to say that the Institute Masses were the first in 40 years, although, I do not believe that the CRNJ said their Masses on the High Altar.