Declaration of CDF re: Excommunication of Army of Mary 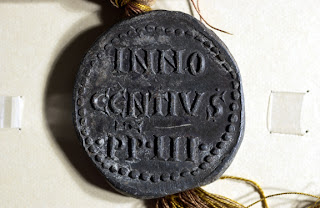 Thanks to a reader who provided this, the text of the declaration from the Congregation for the Doctrine of the Faith on last week's excommunication of the Army of Mary:

CONGREGATIO PRO DOCTRINA FIDEI
DECLARATION
REGARDING THE MOVEMENT,
“THE COMMUNITY OF THE LADY OF ALL NATIONS,”
AND OF ITS WORKS: “THE ARMY OF MARY”,
“THE FAMILY AND COMMUNITIES OF THE SONS AND DAUGHTERS OF MARY”, “LES OBLATS-PATRIOTES”, “L’INSTITUT MARIALYS”
On 26 March 2007 the Archbishop of Quebec, His Eminence, Marc Cardinal Ouellet, addressed a declaration to all the faithful of his diocese regarding the statutes and activities of the movement known as “The Community of the Lady of all Nations”, better known as “The Army of Mary”, and the works connected with this movement.
The Ordinary has declared that “those responsible for the “The Army of Mary” have excluded themselves from the communion of the Catholic Church… The Army of Mary has clearly and publicly become a schismatic community and, as such, a non-Catholic association. Its particular teachings are false and its activities are not able to be frequented nor supported by Catholics”.
With a letter dated 25 March 2007, Archbishop Terrence Prendergast, S.J., Pontifical Commissioner, established 31 May 2007 as the date within which the priest-members of this Association were required to make known their intentions by recanting errors and schismatic acts, and promising obedience to the Holy See, or face appropriate canonical sanctions.
The above-mentioned priests have not followed the directives of the Pontifical Commissioner. Instead on 3 June 2007 many of them participated at the invalid priestly ordination of six members, performed by Father Jean-Pierre Mastropietro, a priest of the same Association.
Considering the very grave situation, without any hope of another solution, the Congregation for the Doctrine of the Faith, in fulfilment of its obligations, declares the following:
a) The so-called “diaconal and presbyteral ordinations” performed by Father Jean-Pierre Mastropietro are invalid.
b) Father Jean-Pierre Mastropietro has incurred an excommunication latae sententiae for the delict of schism (can. 1364 CIC). Moreover he has incurred an irregularity for the reception and for the exercise of Sacred Orders by having attempted to perform an act of Sacred Orders reserved to Bishops (cann. 1384; 1401, n.6; 1044,§1. n.3 CIC).
c) The persons who have claimed to be ordained deacons and priests with the imposition of hands of Father Jean-Pierre Mastropietro have incurred an excommunication latae sententiae for the delict of schism (can. 1364 CIC.)
d) All the members of the above-mentioned Movement and of the works associated with it, who, despite the warning of the Cardinal Archbishop of Quebec on 26 March 2007, have participated in these schismatic acts and have determined to continue to associate with said Movement, are in schism and, therefore, they have incurred an excommunication latae sententiae.
e) The negative doctrinal judgement expressed by the Catholic Bishops of Canada 29 June 2001, after consultation with this Congregation and with the approval of the same, is upheld. It confirms with clarity and firmness that the doctrine promoted by the Movement, “Community of the Lady of all Nations”, better known as “The Army of Mary”, is heretical. Whoever knowingly and deliberately embraces this doctrine incurs an excommunication latae sententiae due to heresy (can. 1364 CIC).

Given at the Congregation for the Doctrine of the Faith, 11 July 2007
This document is to be notified to all persons concerned.
William Cardinal LEVADA
Prefect
􀀿 Angelo AMATO
Titular Archbishop of Sila
Secretary
Posted by thetimman at 9:19 AM

Cool lead bull you found -- "Cool Lead Bull:" sounds like a great name for a beer!