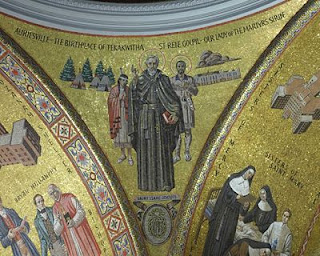 Today is a good day to pray for the intercession of these holy martyrs, and to spiritually accompany the Annual Pilgrimage for Restoration to the Shrine of the North American Martyrs.

Saint Isaac Jogues (January 10, 1607 – October 18, 1646) was a Jesuit missionary who traveled and worked among the Native Americans in North America. He gave the original European name to Lake George, calling it Lac du Saint Sacrement, Lake of the Holy Sacrament. He is regarded as a martyr by the Roman Catholic Church. In 1930 Jogues, St. Jean de Brébeuf and six other martyred missionaries, all Jesuits or laymen associated with them, were canonized as "The North American Martyrs," or "St. Isaac Jogues and Companions." Their feast day is October 19 in the U.S., September 26 in Canada (note: Sept. 26 is their feast day in the traditional calendar, even in the U.S.).

Born in Orléans, France, Jogues entered the Society of Jesus in 1624. In 1642, he was sent to New France as a missionary to the Huron and Algonquin allies of the French. While on his way by canoe to the country of the Hurons, Jogues was captured by a war party of Mohawk Iroquois, in the company of Guillaume Couture, René Goupil, and several Huron Christians. Taken back to the Mohawk village, they were tortured in various gruesome ways, Jogues himself having several of his fingers bitten or burned off.
Jogues survived this torment and went on to live as a slave among the Mohawks for some time, even attempting to teach his captors the rudiments of Christianity. He was finally able to escape thanks to the pity of some Dutch merchants who smuggled him back to Manhattan. From there, he managed to sail back to France, where he was greeted with surprise and joy. As a "living martyr," Jogues was given a special permission by Pope Urban VIII to say the Holy Mass with his mutilated hands, as the Eucharist could not be touched with any fingers but the thumb and forefinger.
Yet his ill-treatment by the Mohawks did not dim the missionary zeal of Jogues. Within a few months, he was on his way back to Canada to continue his work. In 1645, a tentative peace was forged between the Iroquois and the Hurons, Algonquins and French. In the spring of 1646, Jogues was sent back to the Mohawk country along with Jean de Lalande to act as ambassador among them.

However, some among the Mohawks regarded Jogues as a sorcerer, and when the double-calamity of sickness and crop failure hit the Mohawks, Jogues was a convenient scapegoat. On October 18, 1646, Jogues was clubbed to death and beheaded by his Mohawk hosts near Auriesville, New York, along with Goupil and LaLande.
Today, the Shrine of the North American Martyrs, maintained by the Jesuits, stands on or near the site (ten years after Jogues' death, Blessed Kateri Tekakwitha was born in approximately the same place). Brebeuf and five of his companions were killed in Canada in 1648 and 1649.
Posted by thetimman at 10:57 AM

I never knew the whole story on that. Thanks for this post.