Good News Regarding the Implementation of Summorum Pontificum 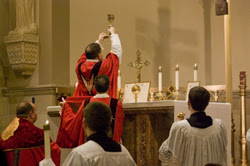 From the St. Louis Review today:

by Jennifer Brinker, Review Staff Writer
photo above by Jeff Geerling
Priests of the archdiocese interested in celebrating the traditional Latin Mass attended a meeting last week to learn more about what is needed to offer it in their parishes.

Last month the archbishop appointed Father Lenhardt as his delegate for implementing the apostolic letter in the archdiocese.

Issued July 7, "Summorum Pontificum" eases restrictions on the celebration of the traditional Latin Mass and gives priests the ability to freely celebrate the Latin Mass using the 1962 missal. Previously, priests were required to request permission from their bishop to celebrate the older form.
The letter also instructs priests to honor requests from the faithful for access to the traditional Latin Mass. The letter designates the traditional Latin Mass as the extraordinary form and the current Mass as the ordinary form. The pontiff noted that one form should not be favored over the other.
"I wanted to offer to the priests of the archdiocese an opportunity to become more acquainted with what the Holy Father has set forth for us," Archbishop Burke told priests at last week’s meeting, held at the Cardinal Rigali Center in Shrewsbury.

He said that the implementation of "Summorum Pontificum" likely isn’t coming as a surprise to the archdiocese, which already has a history of offering the traditional Latin Mass.

"I’m certainly grateful for the letter and new discipline, and I’ve tried to express that both to the priests and to the faithful," said the archbishop. "I anticipate that this will happen in a way that will be very enriching for us. I just don’t find that it’s going to be something terribly shocking in the archdiocese."

The archbishop thanked Father Lenhardt for overseeing the implementation of "Summorum Pontificum" here. The priest is a member of the Institute of Christ the King Sovereign Priest, a society of apostolic life best known for its celebration of the 1962 Latin Mass.

"He is a very approachable person and will be very kind to assist you in whichever way you wish," Archbishop Burke said of Father Lenhardt.

Father Lenhardt told the group that the institute is offering to priests of the archdiocese classes and other resources to prepare those interested in celebrating the older Mass form in their parishes. Priests also are invited to assist at Masses at St. Francis de Sales, he said.

Father William Avis, ordained in St. Louis in June for the institute, will be helping Father Lenhardt to provide resources to priests. Father Avis, a native of Wisconsin, was appointed a vicar, or assistant priest, at St. Francis de Sales shortly after his ordination.

In a speech to priests at the meeting, Father Lenhardt noted that the ordinary and extraordinary forms of the Mass cannot be opposed to one another, "because they are united in the person and in the inner dynamic of Christ’s prayer to the heavenly Father."

"The liturgical prayer of the Church is not the expression of the self-esteem of the celebrating congregation, but it is the prayer of Christ to his Father that is so much more than we could express on our own," he said.
In 2005, the archbishop invited the Institute of Christ the King Sovereign Priest to the archdiocese. That same year, he designated St. Francis de Sales as an oratory with a focus on the celebration of the 1962 Mass. He also placed the oratory under the pastoral care of the institute.

Because of a need to continue offering that form of the Mass to the faithful in that area, the archbishop said he has asked the Benedictine monks of St. Louis Abbey in Creve Coeur to offer one traditional Latin Mass each day of the week, including Sunday.

Abbot Thomas Frerking, abbot of St. Louis Abbey, told the Review that his community will celebrate the Masses in the chapel of St. Anselm’s parish center.

Masses are expected to begin by the first Sunday of Advent, Abbot Frerking said.

The traditional Latin Mass is celebrated daily at St. Francis de Sales Oratory, 2653 Ohio Ave. Mass times are 8 a.m. weekdays and Saturdays; 6:30 p.m. Tuesdays and 8 and 10 a.m. Sundays.
Review staff writer Barbara Watkins contributed information to this story.
___________
Great news all around. I love the Archbishop's generous attitude about the faithful implementation of the Motu Proprio-- he wants his priests to know he is supportive of their desire to say this Mass, and that his Archdiocese will give them the necessary help and resources to do so. And the Archbishop is certainly correct that Fr. Lenhardt is accessible and very kind. I couldn't imagine two better priests to work on this matter, although it makes their full plates fuller, so to speak.

Also, very good news about the West county situation. Abbot Frerking has been at several Masses and events at St. Francis de Sales in the past two years. We wish them every success in their new charge.

And, thirty priests for the initial meeting is a very good sign.
Posted by thetimman at 9:49 AM

Tremendous news, especially about the new location for the Mass at St. Louis Abbey. There are a number of young traditional-minded monks who will be fighting for the chance to say the Mass. (This can only help with vocations, which have been steadily rising in recent years.) And it will be great for three of my boys, who are students at St. Louis Priory School.

Some are concerned with the new ordination rites which "commission presiders/facilitators/collaborators with the bishop" as opposed to a "priest ordained to say Mass for the living and the dead." I am pleased to hear that Archbishop Burke ordains Latin Mass priests according to the old rite. Isn't this a necessity across the board for all bishops who will allow Latin Masses? Thank you for allowing me to make this comment.

At the same time Burke sold the property out from under the Canons Regular of New Jerusalem, and sent them packing.

So what's up? Is Burke flip flopping on tradition, or does he want all the cards in his hands, in typical American-Bishop "Its all mine" mania fashion?

Catholics round the country and world, would really like you to investigate this, as a St. Louis local.

Kudos for your site.

...and now priests throught the archdiocese will learn what people at St. Francis already know: that is, what a wonderful and generous priest Fr. Lenhart is.

This is a great opportunity. And a proactive and heartfelt implementation of the Holy Father's rightful aspirations with this reform.

I must also say, Father Lenhardt is "very accessible and very kind."

Not sliding Father Aivs. They both are two of the most faithful and prayerful priests of the Church I have ever met in my 36 years.

Yes, with this new assigment they will be very busy, so we must keep them both and their staff on top of our prayer list.

May the Lord continue to bring holy priests into the Archdiocese of St. Louis, and keep our Archbishop faithful to His holy Church.

First anonymous-- while certainly it is permissible (and perhaps even obvious) to prefer the traditional rite of ordination over the newer rite, there can be no doubt that the new rite is valid. This is the position even of the SSPX, both as to priestly ordination and episcopal consecration. This is not a sedevacantist blog, and I urge you to prayerfully consider the matter in light of the promises of Christ to Peter, the protection of the Church by the Holy Ghost, and the indefectibility of the Church. I thank you for your comment, but that is the last word on the subject on this blog.

Second Anonymous, I thank you for your comment, too, and allowed its posting here to clear up any confusion that one may have gotten from other internet sources. Without wanting to commit detraction, let me just say that the circumstances surrounding the departure of the Canons Regular are not such that should place any stain on the reputation of our beloved Archbishop. There is more to the story, from what I gather, than some would lead you to believe.

Archbishop Burke is very supportive of tradition. This is verifiable by the many, many overt actions he has taken in this area. A partial list, not meant to be exhaustive-- he was the incardinating (forgive the incorrect canonical term) Bishop of the Canons Regular in LaCrosse, and he invited them here, and gave them a free location here; he invited the ICRSP into LaCrosse and St. Louis, giving them full control over Oratories with all the sacraments in the traditional rite long before Summorum Pontificum; he has ordained their priests in the traditional rite many times, including in his own Cathedral in St. Louis; he was invited to the Vatican for the historic pre-mp meeting; he has appeared on tv and print supporting the MP and the traditional Mass; he is fully on board with the implementation of the mp in a generous manner, as this post attests; and, he has provided the West county parishioners with a daily traditional Mass even after the Canons departed. Like I said, not an exhaustive list, to be sure, but you get the idea.

As I stated above, I do not want to spread gossip; I am sure the Canons felt disappointment that their mission here did not go the way they expected, so by all means give them the benefit of the doubt in Christian charity. But the Archbishop is not to blame, and I think it would be a sad legacy for them if the faithful were led to believe so.

The Archbishop supported them, and supports all of the traditional undertakings in the Archdiocese. In fact, he is administering confirmation to young people at St. Francis de Sales this November.

Pray for him, and for the cause of tradition in the Church.