Another Day, Another Majerus Story 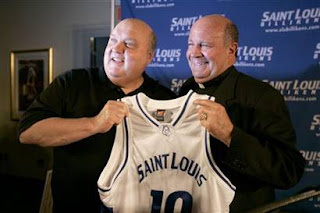 link
Biondi is urged to speak out
By Kavita Kumar
ST. LOUIS POST-DISPATCH
01/25/2008
[...]Some faculty members wish Biondi or other campus leaders would speak out forcefully on the issue to make clear that the university respects academic freedom and that other employees should not be fearful about speaking their minds. [...]
[...]Harold Bush, an English professor and president of the faculty council for the College of Arts and Sciences, acknowledged that the university has a good track record in upholding freedom of expression and ideas.
"But I think some of the faculty is a little nervous about the fact that (SLU officials) have not come out in support of academic freedom and freedom of speech," he said. "I think they might want to consider going a bit farther, saying this is what universities do, this is what we represent. We represent critical thinking and academic freedom."
In the absence of such a statement, Bush said there is a bit of a fear, especially among nontenured professors, about saying something that might upset the archbishop or the church. Some professors, for example, are already hesitant to bring up issues of sexual orientation in the classroom, he said. [...]
[...]In a speech in 2006 accepting the Citizen of the Year award, which is sponsored by the Post-Dispatch, Biondi said SLU welcomes everyone, regardless of their religious beliefs, race or sexual orientation.
"On our campus, we encourage competing ideas and ideologies," he said. "Sometimes that means hosting speakers, events or plays that some may find inappropriate on a Catholic college campus. But as soon as censorship begins at any university, where does censorship then end?"
Despite the protests of some Catholic groups, the school has held the controversial play the "Vagina Monologues," with its frank discussion of homosexuality, on campus. But last year, administrators refused to sponsor the play, so it was performed off-campus.
____________________
Of course, the faculty at SLU worry about their "academic freedom". To a professor, academic freedom means unfettered license to embrace any ideology, revisionist history, or set of "facts" that one chooses, as long as one chooses non-christian worldwide socialism. To normal people, academic freedom means the freedom to find the truth and to share this knowledge with others.
Biondi's silence is deafening, but I think he hopes it all goes away. He can't say the Archbishop is wrong without bringing himself, his school and his order into disrepute with Catholics generally, and the Holy Father particularly. Yet if he appears to "cave" to the mean Archbishop he will have to deal with about 200 candlelight vigils by granola-eaters outside his office.
I just love how Biondi got the citizen of the year award from the very paper covering this story, and how he professed the politically correct agenda while doing so. These are strange times in which we live.
Posted by thetimman at 7:34 AM