I Just Love This Story 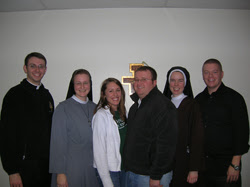 Kudos to the St. Louis Review for a nice piece on a group of friends from who had attended school together at St. Vincent de Paul in Perryville, MO, and who all discerned vocations in their lives. I had the great pleasure to spend a little time with Sr. Mary Michael Reiss and the Carmelite Sisters of the Divine Heart of Jesus this week (the first of their monthly TLMs was celebrated Wednesday), and wish her all the best in the Netherlands this year.

Who knows what influence we have on our friends, and how God makes use of us to each other?

From the article (the photo above appears in the Review and was taken by Cathy Peirick):

January 11, 2008
Perryville reunion reveals God’s call to vocations
by Jennifer Brinker, Review Staff Writer
For what seemed but just a brief moment, a group of young Catholic friends from Perryville, now spread across the world as they pursue their vocational callings, reunited last week in the St. Louis area to catch up and share how their lives are faring.

The friends are John Peirick, who is seeking to become a priest for the Third Order Regular of St. Francis of Penance in Loretto, Penn.,; Jason Schumer, a Kenrick-Glennon seminarian studying at the Pontifical North American College in Rome; Sister Mary Michael Reiss, a member of the Carmelite Sisters of the Divine Heart of Jesus in Kirkwood; and Sister Mary George Brown of the Sisters of St. Francis of the Martyr St. George in Alton, Ill. They are 2002 graduates of St. Vincent de Paul High School in Perryville, except for Sister Mary Michael, who graduated in 2003.

Their afternoon reunion, which took place at the Alton sisters’ convent, also included their high school friend Jamie Prost, who was married to Jeremy Houchins on Dec. 29 at St. Vincent de Paul Parish in Perryville, and Cathy Peirick, their former parish youth minister, co-director of Vincentian Marian Youth and mother of John Peirick.

Speaking by phone, the group agreed that the small reunion gave them a chance to catch up and compare notes, so to speak, on the direction in which God seems to be leading them. The visit also was the first in more than four years in which the entire group was able to get together.

"It’s been great to see how God is working in their lives," said Jason Schumer, a 2002 graduate of St. Vincent de Paul. "We’re all growing in different ways and being challenged. With faith in God, we’ll hopefully be able to continue to seek God and seek him in what he is calling us to do." Schumer, a second-year theology student at Kenrick, has been studying in Rome for a year and a half.

He said he plans on being home this summer for a pastoral assignment and will then return to Rome in the fall.

He is expected to be ordained in St. Louis with his classmates in 2010 and will return to Rome after ordination for one more year of studies. He said he first felt called to the diocesan priesthood because of encouragement

After visiting the seminary, he said, "I really felt called to be there. Through my time there, I came to realize that was indeed what God was calling me to do." So why did he choose the diocesan priesthood? "I fell in love with the priestly ministry in the parish and realize how rich the history is of the Church in St. Louis," said Schumer.

Sister Mary Michael Reiss, in her second year of temporary vows, likely won’t be seeing most of her friends in the near future. The Carmelite nun is leaving next week for her congregation’s motherhouse in Sittard, Netherlands, where she will stay for a year.

The visit, she said, will give her the opportunity to "experience the international aspects of our congregation and to be where the mother foundress was and be with our heritage and history and experience all of that."

With her in the Netherlands and Schumer returning to Rome, Sister Mary Michael said she hopes the two will get to meet up when they are abroad. For now, the reunion at home has "been a lot of fun to be together again and hear everybody’s stories."

She expects to make her final vows in July 2011. When she first considered a religious vocation, "I didn’t know much about religious life at all," Sister Mary Michael noted. "I liked the sisters’ habit, and that they worked with the elderly and children. The joy of the sisters really struck me, and after that, I became more aware" of her own calling.

Like a proud mother to all, Cathy Peirick said the reunion was a great experience to see all of them together and how they’ve grown in their faith.

Responding to a joke about whatever might be in the water in Perryville, she said, "What’s in the water? I don’t know what’s in the water, but I hope it stays. I’ve been very blessed to have been able to spend this time and watch them grow."

Is Perryville also the home of the Central Association of the MIraculous Medal? Maybe it is Our Lady at work here!

My family and I visited the Shrine of the Miraculous Medal last weekend, and it is beautiful. This is no coincidence that there are many vocations in Perryville.

I spoke with one lady who mentioned that every month on the 13th, rain or shrine many people from town gather together by the outside grotto and pray the full rosary. This has been happening for years.?