In Other News: Water is Wet 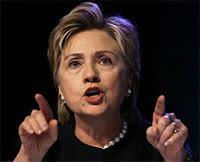 Hillary Clinton Confirms She Will Appoint Pro-Abortion Judges as President
by Steven Ertelt
LifeNews.com Editor
January 23, 2008
Washington, DC (LifeNews.com) -- It's no secret that Hillary Clinton has promoted abortion at every turn as a senator and presidential candidate -- forcing taxpayers to pay for abortions and voting against a partial-birth abortion ban repeatedly. Clinton confirmed she will take her pro-abortion views to the White House in a statement on the anniversary of Roe v. Wade.
At the top of Clinton's agenda as president would be the appointment of Supreme Court judges who would uphold Roe and keep abortion legal for another 35 years.
"When I'm President, I will appoint judges to our courts who understand that Roe v. Wade isn't just binding legal precedent," Clinton said in the statement LifeNews.com obtained.
She said the judges would share her view that Roe "is the touchstone of our reproductive freedom, the embodiment of our most fundamental rights, and no one - no judge, no governor, no Senator, no President - has the right to take it away."
Clinton opposed the nominations of Justices Alito and Roberts to the Supreme Court because, as her campaign said in the statement, "she believed they represented the greatest threat to Roe since it was decided."
"On the 35th anniversary of Roe v. Wade, I am reaffirming my commitment to safe, legal, and rare abortion," Clinton added.
The campaign said Clinton would sign the Freedom of Choice Act, which would not only codify Roe but overturn many of the pro-life laws state legislatures have passed such as parental involvement measures or informed consent.
Clinton said her agenda would also include promoting comprehensive sexual education and the promotion of birth control over abstinence education, which studies have shown to be effective.
Her statement follows on the heels of an endorsement from WCLA - Choice Matters, one of the oldest pro-abortion groups in the nation.
It joins NOW, the Women's Campaign Forum, National Women's Political Caucus, Women's Political Committee and Emily's List as leading pro-abortion groups backing her candidacy.
Posted by thetimman at 1:59 PM

"Rare?" C'mon ... who do they think they're kidding. I'm sure she giggled slightly at that one.

If one goes to the campaign issues web
site called 'ontheissues.org', one will
find that only Ron Paul is and has
been consistently, 100%, all the time,
*against* abortion.

All the other candidates, including
Obama, have been pro-abortion at some
point in their careers.

Mitt Romney currently stands against
abortion. But his position is doubtful
as he has a pro-abortion past while in
office; and his position now appears
to be that he is against abortion in
principal, but he will not try to end
abortion, or limit it in any way.

John McCain is strongly against
abortion, but would allow it in the
case of rape or incest. He also wants
Roe Vs. Wade made irrelevant, but he
would not work to have it repealed.

Both Ron Paul and John McCain have a
0% NARAL (National Abortion and
Reproductive Rights Action League)
rating -- meaning that they are both
considered to be strongly pro-life.
I could not find a NARAL rating for
Mitt Romney.

Thanks for the info Erick. Problem with McCain is that, according to