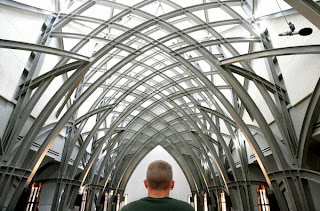 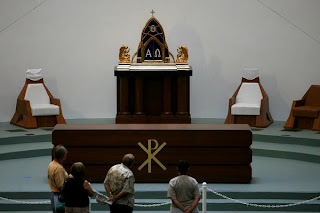 Those Catholics who support the idea of a Catholic University that is actually Catholic have always had an eye on the successes and setbacks of Ave Maria University. It promised much good, has actually brought some of it about, and now stands in a precarious position relative to its mission.
Fr. Joseph Fessio, who used to be the philosophical force behind the University, and its very public face, was a leader in the so-called "reform of the reform" movement. This movement seeks a third way between those who adhere to the tradition of the Church, seeking its restoration, and those who enjoy the novel teachings and practices that arose in the wake of the Second Vatican Council, always claiming that the Council mandated whatever atrocities they perpetrate on the Church at large.
O.K., I am oversimplifying. But the reform of the reform movement seeks to go back to the time of the Council and try to divine the reform of praxis that the Council "really mandated", which can be, and obviously has been, problematic, because many of the Council's documents are ambiguous and subject to varying interpretations. None of this should be news to Catholics who have paid attention in the last few decades.
Reform of the reform people have been in the past generally tolerant of the traditional liturgy and those who support it. Lately they have been even supportive, due to the run up to, and promulgation of, Summorum Pontificum. To them, the Pope has spoken, and they submit, which of course is a good thing to do.
However, one must always remember that they consider the current state of affairs to be a temporary thing. That the freeing of the traditional Mass is good, because it puts pressure on the novus ordo to be celebrated reverently, and also because it provides a baseline for their new plans to reform the liturgy. The novus ordo has been a disaster for the Church, and they can see that it is far more sensible to reform the TLM than to rein in the novus ordo.
Traditionalists also see the current state of affairs as temporary, and hope that the Church's traditional liturgy will triumph over novelty, leaving any changes to it the result of organic development, as was the case for 1965 years before.
However, it has always struck me as odd that those who acknowledge that changes to the liturgy must be organically developed over time can turn around and plan what those changes will be. How can that be organic development?
Well, back on point. Fr. Fessio saw his role at Ave Maria greatly reduced a few years back, leaving the liturgical direction in the hands of those friendly to the so-called Catholic charismatic movement. Even more recently, Fr. Fessio was abruptly sacked by the University, and only a near-riot by financial backers of the place caused them to re-hire Fr. Fessio in a practically ceremonial role.
What does this have to do with the title of the post? Well, look at the pictures here and at the link, and tell me if this is a place designed with the traditional Mass in mind. O.K., tell me if it is a place designed with the reform of the reform in mind. Look at the freestanding altar: it is very nearly impossible to celebrate Mass ad orientem, which is necessary for the TLM, implied in the novus ordo rubrics, encouraged by Pope Benedict XVI, and supported by the reform of the reform movement. It is well-known that Fr. Fessio's preferred way of celebrating Mass is the novus ordo, in Latin, ad orientem. How is it possible that the University would build an oratory where its own past chancellor couldn't celebrate Mass? Or, more importantly, where no priest who wishes to celebrate an authorized form of the Roman Rite could celebrate it?
This isn't a case of there not being enough money to bring this about. So, the question remains, what does this oratory say about the type of liturgy it will contain? And what does that liturgy say about the faith upon which it is based, and which it will inevitably inform? And how does that make Catholic parents feel about sending their children to this institution?
Posted by thetimman at 9:10 AM

That is not how I would have designed a church.

Oddly enough, it has some traditional elements that would upset some spirit-of-Vatican II liturgists, such as a long narrow nave, all seating facing forward, a distinct sanctuary, a central tabernacle, and limited iconography. It also is vaguely reminiscent in various ways of some historical church designs. You could call this a "conservative" design, using the word conservative in more of the American political sense.

They say that we can't build traditional churches because of the loss of traditional craftsmanship, but this is a bogus argument. The architecture of Duncan Stroik, built using modern construction techniques, proves otherwise

I got here from your link in the New Liturgical Movement blog.

As one who prefers a more traditional "style," I have to say I am rather disappointed in the design of this oratory. I don't know why but it feels so Protestant ... conservative Protestant, nonetheless, but still Protestant.
While the altar is definitely better than what was in their computer generated video, I am still disappointed in it as it appears to be wood, and lacks a solidity. And the furishings of the Sanctuary are terrible. Those chairs look like they were pulled of the Starship Enterprise.
I've seen worse, but I really think they could have made something much more beautiful for the glory of God.

roman, thanks for stopping by, and thanks to you and mark for the comments.

it certainly isn't the worst sanctuary I've ever seen, it is just extremely disappointing coming from those who know better than this.

At first glance I thought the altar looked like a casket. . . .

The first thing I thought about those chairs is that they looked like the chairs used by the Jedi council in Episode I: the Phantom Menace.

The priests on staff at Ave are actively hostile to the TLM. My son was in the first class to attend Ave in Naples. He helped form a student group dedicated to tradition. They succeeded in getting a FSSP priest to come on campus to offer Mass for the group. While they sat together in the cafeteria, one of the staff priests came over to them and began to loudly berate the FSSP priest. He demanded that he concelebrate a NOM with him or leave the campus immediately. It ended very badly.

Hideous. All the money in the world can't buy good taste. Or even, apparently, a good reference book on ecclesiastical architecture. Unbelievable.

Not as bad as the Rog Mahal here in LA, but it could be worse. Honestly, for an institution that says it's trying to be Catolic, the Sanctuary sure failed the test. They should have done better. I would have loved to see the chairs on the Side and room for Ad Orientem Masses.

An altar looking like a casket is odd. Rather, if it looked like a tomb, and if it had the body of an uncorrupted Saint inside of it, that would be fine.

Ave Maria's oratory is to this convert from a baptist/anglican/pentecostal up bringing, anything but ORTHODOX, it is a throwback to the era that started the rape of the Catholic liturgy the post vat 2 60's, 70's, 80's & 1990's. question, after the advent of summorum pontificum why are the pro pentecostal clericals presently occupying the oratory so hostile to the 1965 years of orthodox traditional catholic worship??? what part of "the Tridentine Mass is legit that those novus ordo "priests" not understand. Regarding Summorum Pontificum the Pope has spoken and the "born-again priests" need to know this is a new day in the Catholic church. With Pope Benedict16th the Catholic church is beginning AGAIN to become CATHOLIC---shalom

Reading these comments two years later, it's still good to see that strong-arm politics can't fool the rank and file Catholic. In the end, the truth will prevail, but in the meantime, how much damage will be done?

Money can't buy good taste, no, but neither can it buy a love for tradition. I often wonder if one of the Apostles were to walk into town, how many Christians would recognize him? These days, that applies to many Catholics, too, unfortunately.

I like to think the best of Tom Monaghan, that his intentions are true, and that perhaps he's just trying too hard to be popular. But then I read about the impudent liberal staff he's hired, and the litmus paper turns brown. So much for that theory. Now I can confine my aspirations to Tom's conversion, I suppose. What else is there?

As for the acoustics problem, it seems that's a permanent cancer in this Oratory, for the steel, all the 1,270 of tons of it, is permanently arranged in a manner that renders good acoustics impossible. Another lost cause. Money can't buy your way out of a "tin ear," either. If nothing else, this should be a case study in what NOT to do if you want a great oratory. Hey, isn't "oratory" for chanting prayers? Maybe this one is just for looking at, eh?

I sang in a choir in Cologne Cathedral (Germany), in the choir loft. That was an experience!! But you don't have to have such extravagance to have great acoustics (it took centuries to build and is made of solid stone). There is a tiny (by comparison) chapel near 3rd Street here in Los Angeles with great acoustics. And it's less than half the size of the Oratory. The interior is nothing fancy to look at, but if you close your eyes and listen to the music, you think you're in heaven. So it can be done, if you're not disillusioned by trying to make some kind of monument to yourself.