Abortionists Acting as You Would Expect 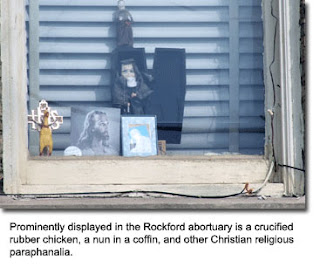 From LifesiteNews:
Sacrilegious Display Continues Disturbing Pattern of Hate at Rockford Abortuary
By Michael Baggot
Rockford, IL, May 7, 2008 (LifeSiteNews.com) - A Rockford abortuary has made the demonic side of the abortion industry readily apparent to the public by decorating its facility with a nun in a coffin, a crucified rubber chicken, and a set of sacred images arranged in a voodoo-style altar.

Kevin Rilott, an Illinois pro-life activist who has often prayerfully protested in front of the Rockford Northern Illinois Women's Center (NIWC) abortuary that features the sacrilegious display, hopes that images of the offensive exhibition will expose the evil carried out at the facility.

"This clinic affects the lives of thousands of Rockford women and children. The issue here isn't even primarily abortion. What we believe the people of Rockford and the country have a right to see is a medical facility that promotes a bizarre form of racism, bigotry, and hatred," Kevin Rilott told LifeSiteNews.com.
The sacrilegious exhibit is part of a trend of disturbing events associated with NIWC.
A video released last month records Keith Sterkeson, a friend of NIWC clinic owner Wayne Webster, spewing profanities and threats at peaceful pro-life protestors in front of the same Rockford abortuary.
Sterkeson repeatedly calls the pro-life cameraman a "degenerate" and a "ni**er" and warns the harassed cameraman that his pit bull will bite if the cameraman gets too close.
During an especially disturbing section of the footage, Sterkeson admits that the law lets abortionists kill children and claims to be sexually aroused by the smell of burned fetal carcasses emanating from the mill's chimney.
Thanks to a police scanner and loudspeaker system that lets abortionist Webster communicate with those outside the abortuary, Webster warns Sterkeson that law enforcement has been called.
"Hey Keith, this a**hole just called the cops. I just heard it coming over the scanner. They called the cops because Keith is down here, yelling and screaming at people, and he has a pit bull with him and he's threatening people. You're not acting any crazier than those other a**holes (the pro-life activists)," Webster announces from inside the clinic.
"I know, I know, Wayne. I know, buddy. I'll talk to you later, Wayne," Sterkeson shouts back before departing while hurling further insults and profanities at the pro-lifers.
"The blatant racism, anti-Christian hate, and even the expression of pleasure at the abortion of children in this video and at this clinic are beyond description. The fact that this is being done at what is supposed to be a medical facility in our city is extremely disturbing," Rilott told LifeSiteNews.com.
"The vile nature of the hatred expressed in the windows of this local so-called medical facility and by the clinic's owner working with his associate should offend every decent person no matter his stand on abortion."
Rilott noted that NIWC has so far escaped punishment for its hateful actions.
"If any other hospital, clinic, doctor's office, or business promoted the racism, bigotry, and contemptuous hatred directed at religious people in the way this facility belittles the Christian faith and African Americans, the public would be outraged."

Rilott, who was present during the taping of Sterkeson's verbal attack upon his pro-life friend, was also the victim of a physical assault during an earlier visit to NIWC. In August 2007, an abortion supporter hit Rilott in the chest, ribs, and stomach while. After Rilott called 911, it took officers over 20 minutes to arrive.

Webster told police that he had forgotten to start his surveillance system that day, but that he did notice Rilott attack a man outside with a sign.

Rilott asked the officer, "If I attacked the guy why did I call 911 three times asking for help" and "why did the guy go in to the safety of the clinic then decide to run away before the police got there?" The officer did not respond.

Rilott and fellow Rockford pro-lifers are currently pursuing a complaint with the Thomas More Society against the city of Rockford for violations of free speech, due process, and equal protection (http://www.thomasmoresociety.org/Rockford/Amended_Complaint).
The compliant argues that Rockford's noise ordinance laws have been unfairly used against pro-lifers to silence them in efforts to counsel women as they enter NIWC.

The complaint also criticizes the state's failure to address a paid pro-life bench advertisement's consistent vandalism, including a photographed instance of a uniformed city bus driver defacing the ad.
Posted by thetimman at 10:48 AM