Another Award I'm Not Likely to Win 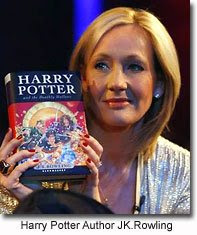 From Lifesite News comes this article, excerpts of which are below. The reason I'll never win is because I choose to acknowledge the natural moral law. And that is considered homophobia by those who accuse people wrongly of homophobia.
Harry Potter Author Gets Quebec Antihomophobia Award
By Thaddeus M. Baklinski
MONTREAL, May 20, 2008 (LifeSiteNews.com) - Homosexual activists in Canada are scraping the edges of the barrel in trying to find new ways to promote their agenda.
Joanne Kathleen Rowling, author of the Harry Potter series, has been awarded the "Fight Against Homophobia" award by the Quebec homosexual lobby group Fondation Emergence, because of her announcement last fall that professor Dumbledore, the 'good' wizard of her stories was a homosexual.
When accused of using the politically correct declaration to produce more publicity after the completion of the series, Rowling said, "[Dumbledore] is my character. He is what he is and I have the right to say what I say about him," and that anyone who disagrees belongs to the "lunatic fringes" of Christianity.
Rowling pandered to the media that the revelation was very "freeing" for her and that only certain people will view Dumbledore differently in light of the new detail about his character. Referring to Dumbledore's boyhood friendship with the evil Grindelwald, Rowling said, "I think a child will see a friendship and I think a sensitive adult may well understand that it was an infatuation."
Rebecca Traister, columnist on salon.com called Rowling's announcement "a neat trick philosophically, but also economically to do it once all the kids that might have been kept away from the material have already read it."
When invited by Fondation Emergence to receive her award, Rowling conveyed her thanks but said that she regrets being unable to attend the ceremony. Three homosexual fans of Harry Potter will be accepting the award on her behalf.
Posted by thetimman at 5:44 PM

aren't we as Catholics supposed to respect homosexuals, whether we agree with them are not?