Bozek Admits He May Glom onto Milingo 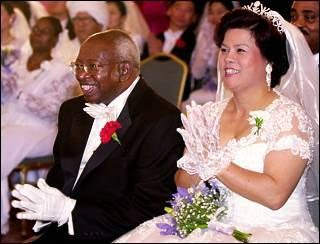 The oh-so-coy, limelight-avoiding, excommunicate Bozek admits, after grueling questioning no doubt, that the once- Catholic turned Moonie Archbishop Emmanuel Milingo is one of the "more than 2, less than 10" Bishops with whom he is seeking affiliation. I don't know how well Bozek would hold up at Guantanamo, but there it is.

And who is Milingo? Here is how Tim Townsend describes him in today's STLToday article:

Milingo is a former Zambian archbishop who was excommunicated in 2006 after consecrating married priests as bishops. In 2002, Milingo married a Korean acupuncturist, chosen for him by Moon, in a mass wedding run by Moon's Unification Church.

I have to admit, if Bozek believes that affiliating with a Moonie excommunicate with severe mental issues will give him credibility, that says something about Bozek, doesn't it?

"I intend to lead St. Stanislaus and continue to be the pastor of this parish even if I'm laicized by the Roman Catholic church," Bozek said.

Continue to lead them to hell-- come hell or high water.

And finally, the Profiles in Courage Award this week goes to Bozek's lackey Chairman of the Board, William Bialczak, who had this to say:


William Bialczak, chairman of the St. Stanislaus board, said Wednesday that he believed "the majority" of St. Stanislaus parishioners would remain at the church even if Bozek placed them under the authority of a bishop like Milingo."That would be OK for most of us," he said. "There's only one God we all pray to."
Posted by thetimman at 8:36 AM

I'm curious, Tin Man. How did you get the timber out of your eye? I just can't seem to get it out of my own, and since you've obviously found a way to take your own timber out, could you let me know?

Wouldn't it be more Jesus-like to dedicate this website to spreading love and compassion, rather than hatred and condemnation?

I thought the Post Dispatch's headline was quite catchy too;

"St. Stan's looks to the fringe"

The headline says it all: "St. Stan's looks to the fringe."

I cannot believe Mr. William Bialzcak is so obtuse as to think his parishioners are willing to follow the Moon.

And BIll Bialczak says "we all pray to one God."

I don't think so.

By the way, is St. Stan's large enough to hold one of those massive group weddings that the Moon likes?

What happens when the Polish Heritage Center gets turned into a Moonie retreat center?

Are you Poles ready to sell flowers in the airport?

Thank you for spreading real love and compassion, standing firm on the TRUTH of our beloved shephard His Grace, Archbishop Burke.

Its interesting to me that some people think that telling the truth is hatred and condemnation.??

They are the ones full of hate, and really to tell the TRUTH THEY have brought condemnation on themselves.

Where ever the bishop is- IS the Church!

I no longer feel sorry for these people. I continue to pray for them, but...they are full of curses...hiding behind this "what would Jesus do" and other words like "peace"....

I'll tell you "what Jesus would do", He TOLD us through His Church and His Rightful spokes person in the Arhcdiocese of St. Louis- Arhcbishop Burke-

Repent of your sins!

I pray that our Blessed Mother keeps you Timmann! This is just the kind of blog we the laymen need. From the bottom of my heart, thank you!

Mick,
I know you won't accept this but, Tim is spreading love and compassion. He repeatedly asks for prayers for our separated bretheren and he continuously reports the truth and consequences of the actions of Reverend Bozek and Board of St. Stan's.

In truth, he does a monumental act of Charity for his fellow Catholics by spreading the TRUE love and compassion of the TRUTH of Holy Mother Church.

I am truly saddened that you cannot and will not even consider the eternal consequences of your actions. They're not Tim's consequences mind you (nor does he wish them on you or the people of St. Stan's), they are the consequences defined by the true Authority of our Church in Our Lord Jesus Christ.

Outwardly you can deny this fact, but inwardly you must consider the consequences to your soul if you are wrong.

The Authority of the Church has spoken, you're wrong. Now is the time to consider what happens to your soul should you leave this earth today, losing your Faith is a terribly tragedy. Don't let eternal evil win this battle. Please.

Timman, keep posting the truths! You are only posting the actual articles (which are incriminating enough on their own) and although some will see your commentary as "hateful or condemning" you are just stating the TRUTH! Fr. Alvarez would be proud :)

Funny how the kooks seem to cling to the claim of love and compassion but fail to adhere to truth.

The truth is plain: St. Stan's and Bozek have chosen to sever their relationship with the Church that Christ has founded on the Rock who is Peter. They sold unity and truth for 30 gold coins. Sound familiar?

Please come back to the true faith! Your soul is not worth this nonsense.

Now hold it Bro. Andrew, hold on! It wasn't 30 pieces of gold. It was a BMW lease, and a condo in the loft district.

Bozek was cheaper than Judas.

In the old Catechism we used to learn that the effects of Original Sin were: "a darkening of the mind, a weakening of the will and an inclination to evil..." This led to personal sin and more of the same.

Or as Chesterton put it: "When people stop believing the big things, they will believe anything".

So it is not surprising that when people reject Catholic teaching or Church authority, they are ready to accept any teaching, any authority.

There, but for the grace of God, go we all.