But Hey, It Could Be Worse--We Could Live in Europe 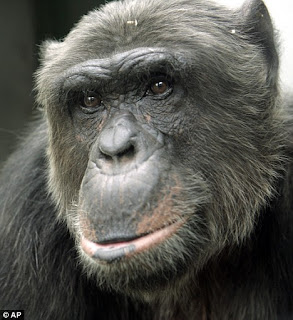 No words can adequately introduce this article, so here it is:
European Court agrees to hear chimp's plea for human rights
Last updated at 21:00pm on 21.05.08

His name is Matthew, he is 26 years old, and his supporters hope to take his case to the European Court of Human Rights.
But he won't be able to give evidence on his own behalf - since he is a chimpanzee. Animal rights activists led by British teacher Paula Stibbe are fighting to have Matthew legally declared a 'person' so she can be appointed as his guardian if the bankrupt animal sanctuary where he lives in Vienna is forced to close.
An anonymous businessman has offered a substantial amount to cover his care, but under Austrian law only humans are entitled to have guardians.
[...]
Posted by thetimman at 1:23 PM

To think that Europe was the center of Christianity at one time and now they do not know which way is up. And it's not good enough that a wealthy doner has pledged support but that Paula has to become the legal guardian. Sanity - another casualty of contraception (culture of death). Hopefully the Austrian law can hold the line.

first of all, I don't think that we should apply one person's possibly irrational tendencies to an entire continent. It's like saying that just because one person in America decided to sue McDonald's because that person was irresponsible about what she ate, all of North America just sue the heck out of people because they are too stupid and fat to take care of themselves. Also, why couldn't Paula just buy the chimpanzee, and be its owner?