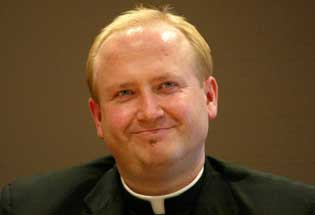 Saint Louis Catholic has learned that the Congregation for the Doctrine of the Faith has rejected the recourse of the Board of Directors of the former St. Stanislaus Parish filed in March 2006, confirming the Decree of Excommunication issued by Archbishop Burke on December 15, 2005.
In vindication of Archbishop Burke, the Vatican found that the Board committed the delict of schism. Further, it held that the Board neglected to file within the legal deadline, and that it was negligent in failing to comply with the requirements of Canon Law.
Recently, Archbishop Burke issued a decree of extra-judicial adjudication against the Board's canon lawyer, Thomas Doyle, which held he was guilty of abuse of ecclesiastical function and of having acted with "culpable negligence".  In that case, Doyle was found to have failed to respond in a timely manner with regard to the summonses that led to the excommunication of two other, later-elected St. Stan's Board members.
Could Fr. Thomas Doyle, OP, JCD be responsible for all of these acts of negligence?  According to press reports, it was he who filed the recourse at the Vatican Embassy in Washington, DC in 2006.
The decision of the CDF vindicates the decisions made by Archbishop Burke concerning the entire lamentable St. Stanislaus schism.
In related news from St. Stan's today, sources informed St. Louis Catholic that a young man from the Detroit area was putatively ordained to the priesthood at St. Stanislaus by a Bishop affiliated with the disgraced Archbishop Emmanuel Milingo, the excommunicated former Catholic Bishop with ties to the Moonie sect, who advocates a married priesthood and who is in schism from Rome.
Fr. Bozek announced to the congregation of the former parish within the last few weeks that St. Stan's would host a "special Mass" on May 27, 2008.  Today, sources told St. Louis Catholic that the young man mentioned above arrived at the Church already dressed in clerical garb, and announced he was there to be ordained.  Later, a car arrived with another cleric, who entered the Church, which, as KMOX reported, was then locked and closed to the public.  I cannot yet confirm the cleric's identity, but it is speculated to be excommunicated, putative Bishop Peter Paul Brennan, who was an Old Catholic Church Bishop who was putatively and conditionally consecrated by Milingo back in 2006.
When asked for information, KMOX reported they were told by a woman in clerical attire at the door that the Board had directed that the service was private.  Sources have told Saint Louis Catholic that this statement is factually inaccurate.
There has been no announcement about whether any other ordinations occurred today, nor was there any announcement of episcopal consecration of Bozek himself. Time will tell if the disgraced excommunicate priest will push matters that much further.
Also, as has been previously reported here, the living quarters of Fr. Bozek have been the subject of recent turmoil among the St. Stan's Board and membership.  It now appears that Bozek has acquired by some fashion a separate residence apart from the St. Stan's rectory.  The St. Louis City Assessor's office shows a publicly available record of ownership by one Marek B. Bozek.
The next act of this scandalous show should be interesting.  I will post further information as I get it.
Posted by thetimman at 7:24 PM

The man's got a condo in the 20th block of Washington Ave? Isn't that the bar and nightclub district?

What started out like Elmer Gantry has now become something only William Peter Blatty could do justice to.

I gotta say, Marek, isn't this an awful lot of work just to keep from being sent back to Poland?

Nice job, timman! So, there was an "ordination"!

I can see now what the attraction to Milingo might be. If Marek get's ordained and ordains through Milingo and his cohort Marek can still claim to be in the ROMAN Catholic line of Apostolic Succession.

The question will be whether he can sell this to St. Stan's regular parishioners.

A private Mass behind locked doors? I thought this was an open, inclusive and welcoming community! For shame!

Good work! Keep the faithful informed. We need this blog.

To the Anonymous who said, "A private Mass behind locked doors? I thought this was an open, inclusive and welcoming community! For shame!"

Hats off to you! That hits the thing right on the nailhead!

Call me paranoid, but I suspect this whole thing, right from the beginning, has been a plot to steal a parish from the archdiocese and hand it over to dissenters.

This thing is a coup d'etat.

Disgraceful. It would almost be funny, if it wasn't so sad.

Time to excommunicate Bozek, and any/all parishioners who stand with him.

Bozek is excommunicated; parishioners who knowingly assist at his Masses are subject to latae sententiae excommunication and commit mortal sin.

Marek Bozek appears to be a self-inflated egomaniac. The real shame is that he is leading so many good people astray. Bozek took a promise of obedience to the Bishop at his ordination. If he can't keep a promise, how does he expect to lead? He is a liar and a cheat and is interested in power and money. So very sad.

Bozek is a money hungry charlatan. The very sad fact is that he is leading so many good people astray. He took a promise of obedience to the Bishop at his ordination. If he can't keep his promises, how can he lead?

Just look at this picture that Timman chose. . .that speaks volumes in and of itself!

You're so right about the picture! Bozek looks like a smiling baboon (with apologies to the baboon population!).

Leading good people astray? Perhaps ontologically they are good, but morally their actions certianly are not. The laity aren't idiots. He isn't leading anyone astray who doesn't want to be led astray.

I never meant to imply that the laity are idiots, but even intelligent, well learned laity can easily be led astray by contradictory signals from those in leadership. This is why dissenters, especially dissenters among the clergy, are so dangerous to the faith. I would be pretty sure that there are parishioners of St. Stanislaus Church that are torn as to who they should believe and follow. Bozek is the one who is going to have to answer for his dissent and for leading people to sin.

The wolves in sheep's clothing are leading many astray! Deo Gratias for Catholic tradition and the Latin Mass. Many have/are falling into apostasy.

Jesus warned against creating a new set of oppessive man made laws that had no Scriptural basis.

Inspite of St Paul's warnings, Cannon Law has replaced the Talmud as the man made law that has become the yoke of slavery from which Jesus freed us.

Anyone argueing Cannon Law is arguing a wrong arguement. There is no Divinity in Cannon Law.