Diversity. Love. Tolerance. Unless You Disagree with Them. 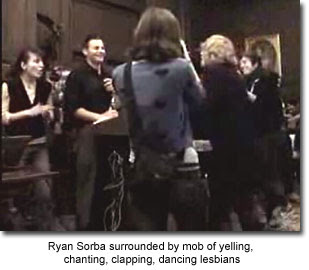 All we hear from the pro-homosexual rights crowd is the need for tolerance and acceptance of alternative lifestyles. Do they really mean this? No, not really. From LifesiteNews:

Lesbian Break-in and Riot During College Speech on "Born-Gay Hoax" Forces Cancellation
Example of homosexual movement forcing "their social and sexual agenda on others," say observers
By Michael Baggot
NORTHAMPTON, MA, May 2, 2008 (LifeSiteNews.com) - "We're here, we're queer, get used to it!" cried a group of lesbians at Smith College Tuesday night in the midst of a riotous protest that met little resistance from on-looking police and security officials and forced scheduled speaker Ryan Sorba to prematurely end his "The Born-Gay Hoax" talk.
Shortly into his speech, the protesters tried to drown out Sorba's words with loud chants and clanging of pots and pans. As Sorba strove to continue his lecture, protesters invaded from a back window, flooded the podium, and began noisily dancing and clapping in front the speaker.
A Smith College official told Sorba that he needed to leave, while two police officers and a security guard watched the protesters continue in triumphant chants.
Because protesters remained in the room, Sorba was not able to return to conclude his talk.
[...]
The Smith Republican Club had invited Sorba to speak on his soon-to-be released book debunking the claim that homosexual orientation is genetically determined, and hence, worthy of social acceptance and legal protection. Homosexual activists routinely use the notion of the "gay gene" to argue that any opposition to their lifestyle is unjust discrimination.
In a March 31 presentation of his "The Born-Gay Hoax" lecture at Framingham State College, Sorba noted that the notion of "homosexual" did not begin until the middle of the 19th century.
Sorba traced the "born-gay" strategy to the 1980s propaganda efforts of Harvard graduates neuropsychiatry researcher Marshall Kirk and public persuasion expert Hunter Madsen.
Sorba added that many researchers attribute homosexuality to environment causes, such as sexual abuse during youth.
Posted by thetimman at 3:24 PM

I'm confused. Is this the offertory portion of the CTA liturgy or a lesbian riot. I can't for the life of me tell the difference.

I have personally watched professors in
my classes try and teach the idea that
homosexuality is an inborn trait. It
shows up in biology classes and
colleges these days as the 'gay
sniff-test' -- sex pheromones (which
are odorless) are supposed in some
studies to be uniquely identifiable by
gay men. In peer-reviewed journals,
however, such studies fall apart as
no pheromonal substance has ever been
scientifically demonstrated to directly
influence human behavior.

Also, I find the following part of
this story to be highly interesting:


I am finding that schools like Harvard
and Smith frequently try to push a
social agenda through research that
they often fail to accurately describe
as "clinical" or "trial" or
"preliminary." They count on the
average Joe Bag-a-donuts hearing the
words 'research' and 'Harvard', and
then placing way too much credibility
on what they say. And before you can
say 'really?' the research winds up
on the six o'clock news, fantasy
becomes fact, and the social agenda
becomes medical policy.

Catholics these days need to consider
very carefully what they hear on the
television and read in their newspapers.

So, I look forward to reading Sorba's
book; and another tip o' the hat to
the timman for a timely article! I
think your blog is turning out to be
a tremendous asset to the Catholic
Church here in America.

Erick, very kind, thanks. Another way to look at it is an excuse to avoid making a living.

To both thetimman and the second anonymous let me recommend to everyone that we are getting into a cloudy area here. The beleaguered lecturer is raising the questions, "Is gayness innate or not"?

The Church in her wisdom only judges the objective character of homosexual acts. She leaves to science the question of whether homosexuality is borne of sources intrinsic or extrinsic.

My understanding of the teachings of the Church is that a homosexual inclination may stem from a series of chosen acts or it may be the result of a disposition.

The word "disposition' is carefully chosen. "Dispositon" or "orientation" may be a result of "habitus" (in Aristototle an effect of repeated acts), or an orientation, that is an inborn trait like a genetic tendancy towards alcoholism.

In other words the Church's teaching is sound either way. The Church has no stake in whether there is a gay gene or not. She simply says that certain acts fail to measure up to the standard of human sexuality which is that it be unitive and procreative. Since gay sex can be neither it is objectively wrong.

I'm wrangling over this only because I believe the Church will never paint itself in a corner as to whether gays have to feel the way they do or just choose to nurture these feelings.

Holy Mother the Church loves her children whatever their flaws and simply tells them what they may and may not do. She also reminds them that with grace and the sacraments anything can be overcome.

It's important not to hang Catholic teaching on one theory of homosexuality or another. Just as in the case of alcoholism, whether it is inborn or learned it's still a bad thing.

And not an easy thing to grapple with. But then neither is life.

Milburn, I don't disagree with anything you wrote. I posted this story to point out the typically intolerant behaviour of the forces of "tolerance".

I know you posted this only to show the fake tolerance of the gay left. I lectured you either because I just felt the innate urge to lecture, or perhaps I have a bad habit. Anyway, I didn't ask for the grace to not do it.

(Some say being pedantic is a trait I inherited from my father and his fathers. Others say I was perverted by Jesuits.)

You get my point. Like homosexuality, boring other people (or boring into them) is an objective disorder.

M, don't be so hard on yourself!

Good for Sorba! Too bad the College didn't have the backbone to kick out the devil's helpers.

I think it is very important to get the facts out about the myth of being Born-Gay. I guarantee that the agenda will not stop at the gays!

What about people who are attracted to CHILDREN? Can they not claim that they are born with an attraction to children? How about if someday they have TV shows showing gay men with boy lovers? Men with underage girls? They show gay lovers making out now on soap operas and movies!

How about pedophiles "coming out of the closed" and demanding that they are not discriminated against with their right to have under age lovers, (children)? Will they be wanting to adopt also?

I remember, not long ago when homosexuality was thought to be a very sad sexual disorder by 97% of the population. Only the 3% gays thought it was fine. Now, just how many people are indoctrinated by their "Born Gay" movement to think it is just another "lifestyle."

It is our duty as faithful Catholics to become educated so we can be armed to fight Satan and his "Born Gay, So Give Me The Same Rights as Heterosexual Couples and More," movement.

The Holy Roman Catholic Church embraces
science, as well as theology and the divine economy, or oikonomia. Whether
or not homosexuality is an acquired or
an inborn trait is of great interest to
the Church, as the Church cares about
everything when it comes to the
salvation of the human race. Nothing
is merely "left to science," as if
the Church were unconcerned with
science or scientists. Scientific
definitions are of great value to the
Catholic Church. Truth cannot
contradict Truth, in any form.