It's not a particularly original observation that an editor can influence the views of the reader of a publication by deciding which photos are selected, which captions are written, which quotes are used, and which stories are run.
A case in point from today's St. Louis Review: 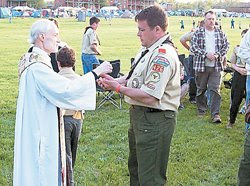 REVERENT MASS-- Father Gary J. Faust, pastor of St. Bernadette Parish in Lemay, distributes Communion during an outdoor Mass for Boy Scouts at the Camporee weekend April 25-27 at Jefferson Barracks.
Now, "Reverent Mass" is certainly an interesting caption for this photo, which clearly depicts a person receiving Holy Communion in the hand.  Is it possible that the Review writer or editor responsible for using this photo, and writing this caption, disagrees with the recent statements of Archbishop Malcom Ranjith, Secretary for the Congregation for Divine Worship about the desirability of ending this deviation from traditional practice?  Is such a caption a veiled dig at the Extraordinary Form of the Roman Rite, which is regaining favor (particularly in this Archdiocese) in part because of the greater reverence that the faithful who attend it observe?
Of course, it is impossible to know for sure the intent and feelings of this person.  I also don't want to state that the Mass that contained the moment photographed above could not have been reverent.  My only point is that "Reverent Mass" is not a descriptive or obvious caption.
How about some alternatives:  "The Body of Christ", or "The Bread of Life", or "Holy Mass".
The problem with this post, which I suspect will draw the ire of some readers and cause the shoulders of other readers to shrug, is that my point of view on this is merely based on a suspicion.  I should give the Review the benefit of the doubt.  So I will, and just end this post with the words of Archbishop Ranjith about the ancient practice of receiving Holy Communion on the tongue, while kneeling:
...faith in the Real Presence of Christ in the Eucharistic species already belonged to the essence of the faith of the Catholic Church and was an intrinsic part of Catholicism. It was clear that we could not build up the Church if that faith was minimally affected.

Therefore, the Eucharist, bread transubstantiated in Body of Christ and wine into the Blood of Christ, God among us, is to be greeted with wonder, reverence and an immense attitude of humble adoration. Pope Benedict XVI... points out that "receiving the Eucharist means adoring him whom we receive [...] only in adoration can a profound and genuine reception mature."(Sacramentum Caritatis 66).

Following this tradition, it is clear that it became coherent and indispensable to take actions and attitudes of the body and spirit which makes it easier to [enter into] silence, recollection, and the humble acceptance of our poverty in the face of the infinite greatness and holiness of the One who comes to meet us in the Eucharistic species. The best way to express our sense of reverence to the Lord in Mass is to follow the example of Peter, who as the Gospel tells us, threw himself on his knees before the Lord and said, 'Lord, depart from me, for I am a sinner " (Luke 5, 8).

As we see in some churches now, this practice is decreasing and those responsible not only require that the faithful should receive the Holy Eucharist standing, but even eliminate all kneelers forcing the faithful to sit or stand, even during the elevation and adoration of the [Sacred] Species. It is ironic that such measures have been taken in [some] dioceses by those responsible for liturgy, or in churches, by pastors, without even the smallest amount of consultation of the faithful, even though today, more than ever, there is an environment desiring democracy in the Church.

At the same time, speaking of communion in the hand, it must be recognized that the practice was improperly and quickly introduced in some quarters of the Church shortly after the Council, changing the age-old practice and becoming regular practice for the whole Church. They justified the change saying that it better reflected the Gospel or the ancient practice of the Church... Some, to justify this practice referred to the words of Jesus: "Take and eat" (Mk 14, 22; Mt 26, 26).

Whatever the reasons for this practice, we cannot ignore what is happening worldwide where this practice has been implemented. This gesture has contributed to a gradual weakening of the attitude of reverence towards the sacred Eucharistic species whereas the previous practice had better safeguarded that sense of reverence. There instead arose an alarming lack of recollection and a general spirit of carelessness. We see communicants who often return to their seats as if nothing extraordinary has happened... In many cases, one cannot discern that sense of seriousness and inner silence that must signal the presence of God in the soul.

This situation not only leads us to reflect upon a serious loss of faith, but also on outrageous offenses...

The Pope speaks of the need not only to understand the true and deep meaning of the Eucharist, but also to celebrate it with dignity and reverence. He says that we must be aware of "gestures and posture, such as kneeling during the central moments of the Eucharistic Prayer." (Sacramentum Caritatis, 65). Also, speaking about the reception of the Holy Communion he invites everyone to "make every effort to ensure that this simple act preserves its importance as a personal encounter with the Lord Jesus Christ in the sacrament." (Sacramentum Caritatis, 50).

In this vein, the book written by Bishop Athanasius Schneider, Auxiliary Bishop of Karaganda in Kazakhstan entitled Dominus Est is significant and appreciated. He wants to make a contribution to the current debate on the real and substantial presence of Christ in the consecrated species of bread and wine... from his experience, which aroused in him a deep faith, wonder and devotion to the Lord present in the Eucharist, he presents us with a historical-theological [consideration] clarifying how the practice of receiving Holy Communion on the tonue and kneeling has been accepted and practiced in the Church for a long period of time.

Now I think it is high time to review and re-evaluate such good practices and, if necessary, to abandon the current practice that was not called for by Sacrosanctum Concilium, nor by Fathers, but was only accepted after its illegitimate introduction in some countries. Now, more than ever, we must help the faithful to renew a deep faith in the Real Presence of Christ in the Eucharistic species in order to strengthen the life of the Church and defend it in the midst of dangerous distortions of the faith that this situation continues to cause.
Posted by thetimman at 7:32 PM

wow...talk about making a mountain out of a molehill...my guess would be that the caption editor was referring to the last part of the Scout Law: A Scout is Reverent.

My take: no poor motives here. Publisher Burke and Editor Rygalski (sp) won't tolerate crap in the Review...yet another way in which this archdiocese is blessed.

I am quite empathetic. Don't get me started on diocesan paper editors. See my post on Liz Quirin of the Bville Messenger putting a liturgical dancer on page 1. Ugh!

How about this one:

"A Scout is ... reverent." That is where the caption comes from.

Thanks to the Scouts for the tip on the reverent bit. I get it. I still stick by my original contention.

Which I accept is a molehill. I just tried to describe the molehill.

thetimman- I agree with you 150%! If this were the ONLY article in the Archbishops paper then I could let this slide..but its not! From week to week there is trash, anti-catholic junk in that paper.

Personally I believe that editor of the Review needs to retire, or be replaced.

The StLReview in NOT a secular paper. It should speek truth, and only truth. If you want objective reading, read something else. I want the diocesan paper to teach me the faith of the Church.

To much have the diocesan papers filled their to post with lay people who have no idea how to project the faith of the Church. To often we want objective truth. The Church (ROME) is the only one who defines what we believe.

Thank you thetimman, keep up the good work!