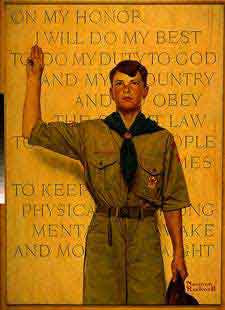 Is it too late to say never mind?

Jennifer Brinker, a reporter with the St. Louis Review, was kind enough to post a comment to the "Reverent Mass" retraction post about her authorship of, and intent behind, the cutline at issue. I thought she deserved to have her explanation get more attention that merely as a comment, so here it is below.
As the reporter who wrote that cutline, I wanted you to know there was no intentional dig against either form of the Mass. "REVERENT MASS" was in part a reference to Scout Law, but part of it also came from a conversation I had with Father Faust, who celebrated that Mass. As the boys were finishing their activities for the day and coming to the common area for Mass, he noticed how their demeanor changed to a quiet reverence. It was difficult for Father to put into words how beautiful that scene was, but nevertheless, he was very moved. I'm sorry if the cutline caused any confusion. As an earlier poster suggested, perhaps a better cutline would have been "Scouts reverent in Mass and in everyday life." I enjoy reading your blog!
Jennifer Brinker
Thanks, Jennifer, for your explanation and your kind words. I don't know that a wordier cutline would have been better; again, knowing the background of the scout motto, it was clever.

Perhaps lost in my inartful commentary is the larger issue of whether receiving Holy Communion in the hand is itself reverent. Probably, the majority of readers receive in this fashion. I don't know, but the next poll I will post will ask this question. Certainly, the catechesis we have been given (or not given) presents this as a perfectly reverent option. However, the Holy Father is suggesting, through the statements of his curia, that this fairly recent innovation be reexamined with an eye toward the return of communion on the tongue.
Posted by thetimman at 3:07 PM

I am happy to find out that someone from the Review reads your blog. I hope she can talk it up to others if they are not reading it already.

It is the past and sometimes current reputation of the Review being quite liberal and the picture of an outdoor mass, and receiving in the hand that did not look "reverent" to me.

I do respect the Boy Scouts, but I do not agree with the need to have mass outdoors, when there are churches near Jefferson Barracks. Maybe they can just go home early on Sunday – it is the Lord's day.