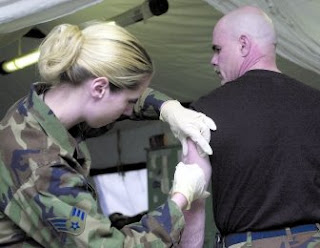 From Children of God for Life:
Military Backs Down: Grants Religious Exemption
May 12, 2008
(Washington, DC) In a surprise move by military officials, Officer Joseph J. Healy received official notification on May 9th that they would reverse their previous decision denying him a religious exemption from the Hepatitis-A vaccine. Healy, a Lieutenant Commander in the Coast Guard and a devout Catholic had filed the exemption due to the use of aborted fetal cell lines in the vaccine. Children of God for Life had been assisting Mr. Healy and the attorneys at Alliance Defense Fund for over year in preparation of his right to abstain under Catholic teaching on moral conscience.
"I am not against all vaccines; they are in large part very good and they help protect society from certain preventable diseases", said Cdr. Healy. "In my specific case, I had to weigh my obligation to raise a conscientious objection to the evil way in which the vaccine was derived versus my personal risk and societal risk of Hepatitis A."
In his research, he discovered that an immunized person can still be a carrier of Hepatitis-A if he/she comes in contact with infected fecal matter. Proper hygiene and simple hand washing is actually the best way to prevent the spread of the disease. Healy further noted that, "Eighty-five percent of those exposed to the virus display slight to no symptoms and all develop a permanent immunity to the virus once exposed. Less than 3% of all exposures lead to severe symptoms or death." Since the disease did not pose any sort of significant risk to himself or others around him, Healy weighed his decision heavily on his Catholic faith and pro-life convictions. He simply could not in good conscience use a vaccine that was in any way connected to abortion.
Using the Catholic guidelines on the use of aborted fetal vaccines Healy filed his religious exemption according to standard military procedures but was subsequently denied. Attorney Matt Bowman with Alliance Defense Fund promptly agreed to take his case and filed a lawsuit in Federal Court. Healy v. United States Coast Guard www.telladf.org/UserDocs/HealyComplaint.pdf.
In essence, Coast Guard officials stated that since Catholic teaching did not forbid immunizations, Cdr. Healy was not entitled to a religious exemption. However, unlike most other Christian faiths, the Catholic Church teaching on the duty to follow one's properly formed moral conscience is clearly defined as a tenet of the faith. In addition, the document by the Pontifical Academy for Life issued in June 2005 clearly allows and encourages abstention under proper conditions.
Debi Vinnedge, Executive Director of Children of God for Life has worked for years assisting parents and others in the military who are unlawfully denied religious exemptions. "Until Joe Healy came to us seeking help, no one had ever attempted to bring a lawsuit against the military over this specific issue", she said. "Joe's courage in pursuing his religious rights makes him a hero in my eyes because he would not back down from his deeply held religious convictions, even when faced with the threat of military discipline."
Vinnedge noted that the law governing military religious exemptions is unconstitutional as written under Equal Protection. The law as stated gives preference to only those religions that oppose immunizations as a tenet of their faith. "If the matter had gone to trial, Healy most likely would have prevailed and the law would have been changed", she stated. "I do hope that others in Commander Healy's position are encouraged by his example to stand up for their rights and end this injustice once and for all!"
Posted by thetimman at 1:20 PM

Good to see the Military getting something right.

EVEN BETTER for a Catholic to step up to the plate and take a stand for pro-Life by not receiving the vaccination that was made using aborted babies.

Thank you for posting this article. It was a tough decision for me to move forward with my case, but it was the right thing to do and many more people now know that vaccines may be manufactured using cell lines derived from aborted babies.

More info about this can be found at Children of God for Life: www.cogforlife.org.

Congratulations. You've won an important and necessary point. Far be it for the Military to decide what the Catholic Religion requires, and also what our own consciences require. It's wrong to cannibalize, regardless of religion.

Courageous and a true hero indeed! You are not only a moral investor, but were compelled to take the action to the front lines with the internal enemy [the tolerance of the murdering of the innocent, which is devastating this country].

Pax Christi, Joe, and thanks again for your fortitude.
For the sake of His sorrowful passion have mercy on us and all the whole world.