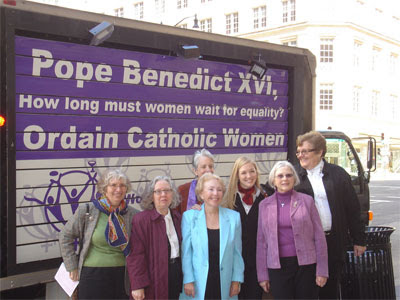 To help refute claims that I fail in charity towards the ladies who pretend to be priests, I will endeavor to triple the readership of their just-released statement of disappointment in the wake of the Archbishop's two Vatican appointments:

Aisha Taylor, Executive Director of the Women's Ordination Conference, issued the following statement about the Vatican's appointment of Archbishop Raymond Burke of Saint Louis to the Pontifical Council for Legislative Texts:

The appointment of Archbishop Raymond Burke is an all-too-familiar pattern that we have seen time and again. Church leaders are rewarded for behavior that goes against the main principles of Christianity. Archbishop Burke's appointment comes less than two months after his unnecessary excommunication of three ordained Roman Catholic women. This seems to be nothing more than a pat on the back for his deliberate sexism.

The Women's Ordination Conference is deeply disappointed by this Vatican appointment, especially on the heels of the pope's visit to the US, where on the surface, it seemed to be a pastoral visit that provided some healing for U.S. Catholics. A look deeper shows that women were intentionally excluded when they could have been included, such as during the Papal Masses when only ordained men distributed the Eucharist.

Archbishop Burke has demonstrated callous disregard for his community and he is out of step with his brother bishops in many of his actions. In addition to the excommunications, he has consistently worked to promote his own ultra-conservative agenda. From his unwavering position on actions taken by Catholics who hold public office to his disputes with St. Stanislaus Kostka Church in Saint Louis, he has done nothing more than violate every aspect of the spirit of the Second Vatican Council.

The Women's Ordination Conference is proud to represent and advocate for the vast majority of U.S Catholics that support the ordination of women. Together, we will tirelessly work until justice is achieved so Archbishop Burke and other church leaders who go out of their way to disregard women's vital roles in the church no longer receive recognition for their blatant sexism.
_____________
Thanks for sharing, and God bless!
Posted by thetimman at 3:54 PM

What's wrong with being sexy?

"This seems to be nothing more than a pat on the back for his deliberate sexism."

So, defy the teachings of the Church, get called on it, and you get to claim sexism. That is using the gift of reason!

There is just too much to comment on here, I'm going to bed.

"women were intentionally excluded when they could have been included, such as during the Papal Masses when only ordained men distributed the Eucharist."

Quite frankly, I'm mad about the sexism against male lay persons, they didn't get to "do" anything at Mass (because we all know that being seen is the most important thing in the Mass), every one of the readings (save the gospel) were done by women.