Ron Paul to be Active at the Convention? 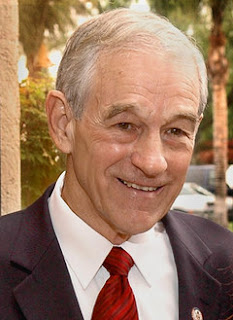 I don't often blog on purely political topics, but I have made no secret for my admiration for the Ron Paul presidential campaign. For instance, it has shown the ability to raise large sums of money with no mainstream media coverage. It has won delegates at several state conventions using good old fashioned grass roots activism (Missouri was one of these states). And it is the only semblance of a conservative voice in the Republican field this year.

This update comes from the LA Times political blog:

Virtually all the nation's political attention in recent weeks has focused on the compelling state-by-state presidential nomination struggle between two Democrats and the potential for party-splitting strife over there.

But in the meantime, quietly, largely under the radar of most people, the forces of Rep. Ron Paul have been organizing across the country to stage an embarrassing public revolt against Sen. John McCain when Republicans gather for their national convention in St. Paul at the beginning of September.

Paul's presidential candidacy has been correctly dismissed all along in terms of winning the nomination. He was even excluded as irrelevant by Fox News from a nationally-televised GOP debate in New Hampshire.

But what's been largely overlooked is Paul's candidacy as a reflection of a powerful lingering dissatisfaction with the Arizona senator among the party's most conservative conservatives. As anticipated a month ago in The Ticket, that situation could be exacerbated by today's expected announcement from former Republican Rep. Bob Barr of Georgia for the Libertarian Party's presidential nod, a slot held by Paul in 1988.

Nevermind Ralph Nader, Republican and Democratic parties both face....
...potentially damaging internal splits that could cripple their chances for victory in a narrow vote on Nov. 4.

On the same May 6 in North Carolina, McCain received less than three-quarters of Republican votes (74%), while Huckabee got 12%, Paul 7% and Alan Keyes and No Preference took a total of 7%.

Pennsylvania was even slightly worse for the GOP's presumptive nominee, who got only 73% to a combined 27% for Paul (16%) and Huckabee (11%).

As Politico.com's Jonathan Martin noted recently, at least some of these results are temporary protest votes in meaningless primaries built on lingering affection for Huckabee and suspicion of McCain.

Given the long-since settled GOP race, thousands of other Republicans in these states, who might have put up with a McCain vote, crossed over to vote in the more exciting Democratic primaries, on their own for Sen. Barack Obama or at the urging of talk-show host Rush Limbaugh who sought to support Hillary Clinton and prolong Democratic bloodletting.
According to a recent Boston Globe tally, Paul has a grand total of 19 Republican delegates to Romney's 260, Huckabee's 286 and McCain's 1,413.

The last three months Paul's forces, who donated $34.5 million to his White House effort and upwards of one million total votes, have, as The Ticket has noted, been fighting a series of guerrilla battles with party establishment officials at county and state conventions from Washington and Missouri to Maine and Mississippi. Their goal: to take control of local committees, boost their delegate totals and influence platform debates.

They hope to demonstrate their disagreements with McCain vocally at the convention through platform fights and an attempt to get Paul a prominent speaking slot. Paul, who's running unopposed in his home Texas district for an 11th House term, still has some $5 million in war funds and has instructed his followers that their struggle is not about a single election, but a longterm revolution for control of the Republican Party.

So eager are they to follow their leader's words, that Paul's supporters have driven his new book, "The Revolution: A Manifesto," to the top of several bestseller lists.

While Paul has consistently refused a third-party bid, he has vowed not to endorse McCain, a refusal mirrored by hundreds of his supporters who've left comments on The Ticket in recent weeks. And, no doubt, they'll flock back here today to spread the gospel below.

--Andrew Malcolm
Posted by thetimman at 10:24 AM