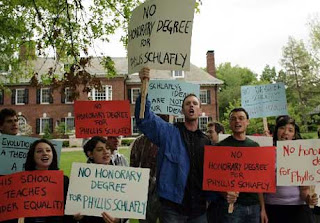 So, get this-- the Chancellor of Washington University sent an email to students and faculty apologizing for the anguish caused by awarding an honorary degree to Phyllis Schlafly.  Wash U will still award the degree, thankfully, because pulling it would be so incredibly rude and embarrassing as to be out of the power of even a modern University administration.
Mark Wrighton took pains to write that he strongly disagreed with many of Schlafly's views, but that the award would be given because the University's normal procedures to grant the award were followed.  He did promise that he would review the procedures so that the University would never again make the mistake of granting an honorary degree to a woman who actually achieved something.
While Wrighton did not state which of Schlafly's views caused him problems, it is likely to be her commitment to equal rights of men and women under the law, as exemplified most famously in her leading role in opposing the falsely-labelled Equal Rights Amendment.
Schlafly, at her acerbic best, had this to say about the whiners:  "They are a bunch of bitter women.  It was 25 years ago that we buried the Equal Rights Amendment and they are still whining about it."
Without any apparent awareness of the irony, Chancellor Wrighton praised the aggrieved students, faculty, and alumni:  "I thank you for all that you do to make this a community so open, tolerant and inclusive..."
Even Bill McClellan knows better.
Posted by thetimman at 9:42 PM

RE: Bill McClellan. Wow! I didn't know he had it in him. Good on him.

But, I have to say, there is nothing anti-intellectual about Phyllis Schlafly. It's the preening faux-intellectual that the political right opposes.

I'd heard on NPR this morning that she called the protesters "a bunch of losers." LOL!!!

As A WAsh U alum, I cannot wait to discuss this the next time someone calls me for a donation. If this causes the profs and students anguish.....well, I wonder how they deal with a real tragedy.

So Bill McCellan "sort of defended Phyllis Schlafly" –big deal! He gets a little point for try so hard to be fair to such a "controversial, mean and out of touch" woman! He didn't do her justice at all by saying those untrue things about her views and character, and wacky ideas - PLEASE! Mean? Getting down in the mud?

I have been listening to her and reading Mrs. Schlafly's books since I was a girl and she is never at all anything but a true lady armed with indisputable facts! That is what gets on the anti-men, anti-women, anti-children, anti-freedom, anti-marriage people's ire. (And stupid college students).

She is absolutely brilliant in politics, law and family rights! She saved our country from many freedom losses by opposing the horrible ERA single handedly.

As far as I am concerned, Washington University, and the uneducated student protesters are not good enough to touch the bottom of her high heels!

Actually, my wife is graduating from Washington University tomorrow, and it is not "her commitment to equal rights of men and women under the law" that people have a problem with. It is much more her views on marital rape that are an issue. Namely, and so there is no confusion I will quote, "By getting married, the woman has consented to sex, and I don't think you can call it rape." Or it could be her view that feminism is "incompatable with marrige and motherhood". Or possibly her view that the feminist movement as "teaching women to be victims". I am a little tired of this being presented as the Washington University community is intolerant of non-liberal views. There would be no (okay, I can't say that, how about less) dissention with a choice of, say, David Brooks (as an alternative to Chris Matthews or Tom Freidman a few years ago) or Jack Danforth receiving an honorary degree (note: I haven't done a search, but I would be willing to bet Sen. Danforth has spoken at WU graduations). Please look from someone else's point of view. To put this in current terms, and I am making an assumption that you would be offended by this choice, but how offended would you be if Jeremiah Wright was chosen to be the commencement speaker at your graduation. Or Gloria Steinem. Or Jesse Jackson. I could go on. As offensive as these people's comments are to you, that is how offensive Phyllis Schlafly's comments are to the members of the WU community.

latinmassgirl, I thought McClellan's piece was quite good. He is a liberal of the best kind, in my opinion-- of course wrong nearly all the time, but he actually tries to be accommodating of other views. He doesn't really understand them, but if all liberals attempted to be fair, as he does, we wouldn't have the problems we do.

I don't disagree with Schlafly's comments that a women who marries consents to marital congress with her husband. So does the husband, for that matter. One party cannot deny the marital act without grave reason, or they sin. Now of course it is not a loving act to force a spouse to provide the marital right when they have a good reason not to. But this is not rape. Rape is intercourse without consent of the parties. Both parties consent to relations at the altar. Sorry if this offends you, but it is the truth.

I think your choice of David Brooks or Jack Danforth as alternatives is telling--these men are only considered conservatives by liberals. Danforth, especially-- he fronted for, and funded, Amendment 2 which forces funding for cloning and murdering human beings for profit. Not a terribly conservative value.

In fact, an honorary degree to Danforth would offend me, but it is the province of the University to give these to whom it wills. It certainly wouldn't ruin my graduation ceremony.

To the Liberal Anonymous,

Claiming her pro-family, anti-feminist views are equivalent in offensiveness to a half crazed Reverent Wright are ridiculous!

She is also against Judicial activism, which I'm sure bothers you also. So what?

She is also vocal about the invalidity of Roe vs. Wade. Now that's the main issue, isn't it? We can't have a pro-life, pro-family, conservative woman receive an honorary degree can we?

We must all follow the same beliefs as the liberal professors at Wash University, or the protesters will be out! How tolerant, how diverse!

Actually anonymous, had you read the first article that this topic was based on, Jesse Jackson has been honored by Washington University (http://news-info.wustl.edu/news/page/normal/11727.html).

Mr. Jackson is nothing more than an extortionist who hides behind his tax-dodge, Rainbow Coalition.

Fortunately, I didn’t have to sit through Jesse Jackson but I did get Richard Gephardt at my commencement. For me that wasn’t much better but I didn’t see protesters dancing in the aisles like I’m sure you will see protesting Mrs. Schlafly.

To both Timman and Latinmassgirl,

You are both agreeing with my point. It is not the fact Phyllis Schlafly is conservative that is the reason for the protests, or that WU is intolerant of other views. It is the specific views (and promotion, thereof) of Ms. Schlafly that are in question. I fully acknowledge that we will not agree on these specific views. However (and bear in mind that I speak for myself, not the entire WU community), it is not conservativism that is incompatible with the WU community, but these specific stances.

Again, I would like to ask you to look from the eyes of someone else, Latinmassgirl, as to the reference to Rev. Wright. I think it is a completely appropriate analogy. First of all, I am honestly judging Ms. Schlafly based on the limited soundbites and reading I have done in my life. I have never seen her speak in person, nor read a full book of hers. I am going to assume that you are judging Rev. Wright on the soundbites you have heard in the media/youtube and have never attended TUCC in person (note: neither have I). Second, where you see Rev. Wright as "half-crazed", I see someone speaking from the experience of his people in a prophetic manner to his church. However, I can certainly acknowledge where people can be bothered/offended by this speech. I can't speak for him, but I would be willing to say that his intent is to bother and even offend. That's how you get people agitated to act. I wouldn't use the term "half-crazed" to describe Ms. Schlafly (I don't like to label people), but I find her speach to be not only offensive, but a slap in the face to any woman who has been a victim of rape or sexual assault.

P.S. You have made several assumptions about me in your notes. I don't necessarily disagree with any of them, but we are all more complex than assumptions show. I enjoy reading your blog, if for no other reason to see how the other half lives.

Mrs. Schlafly elaborated in her interview with the Wash U student paper. She separates the violence from the sex. Sex between spouses is never wrong, in fact it's integral to marriage, as Timman explains, the Catholic tradition. Schlafly is Catholic, after all. She is clear that the violence is wrong and should be punished under existing assault and battery type laws. Now, if a husband is obtaining sex from his wife by violence, then he may be charged for the violence, but not the sex. We should read into that that husbands are not permitted to forcibly seek sex from their wives because of the violence, but wives and husbands have the obligation to relations. Surely a man and woman can discuss and come to some agreement as to what the marriage approach to sexual activity will be.

This is clearly too deep a distinction for these children to comprehend.

I am from the same generation as you, but my mom was a Phyllis Schlafly reader, so I read a couple of them myself. Then in college I was bombarded (and brainwashed) with feminism, even studying and writing papers on feminist authors and leaders such as, Betty Friedan, Naomi Wolf, Germaine Greer. Have you ever read these radical women? I bet not, or you may not want to call yourself a feminist. They were that atrocious!

I became a dissatisfied, unhappy career woman and simply made one mistake after the other in my life, as a "feminist." In my late 20's, I remembered Phyllis Schlafly, and I began listening to her and reading her books. I became happy and confident, embracing my womanhood! She is PRO-woman! I realized that the feminist movement is NOT what most women relate to anymore at all, and it is damaging to women, men and families.

The feminist movement is just a radical political movement with an agenda, is obsolete, and harmful. If you would truly like to become educated and not just listen to the biased media sound bites, I would highly recommend reading, "Feminist Fantasies," by Phyllis Schlafly. No matter what you have been conditioned to believe, she is brilliant, that is a fact.