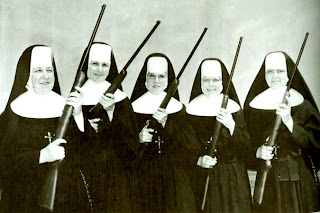 I really have to subscribe to the St. Louis University News.  In this issue, Sr. Lears and other tolerant faculty members are protesting the granting of a charter to a student organization called the Gun Awareness and Marksmanship Education Club.  I suppose this group is for those students who are interested in learning how to properly and safely use and care for firearms, and for supporting what Rick Majerus says trumps the teachings of Holy Mother Church-- the bill of rights.
Of course, Sr. Lears is among those who hold that chartering this student group "is not in keeping with the Jesuit and Christian values of loving and forgiving one another in a world full of hatred and violence."  Funny, I didn't see her name, or that of any of the other signers, on any open letters asking that the homosexual student group Rainbow Alliance be denied a charter.
Let's see--  guns are not inherently immoral but are merely tools that can be used for good or ill, but we oppose a group that promotes their correct and safe use; at the same time, homosexual acts are gravely immoral, yet we support the existence of a group that gives rise to the impression that such activity is a morally neutral, or even morally good, activity.  As the reader who tipped me to this story remarked, "The dissident mind is a strange thing to behold."  For instance, consider this gem:
"We mustn't confuse others by stating that we are a gun-free campus, but then sanction a gun club."
Really?  How about this similar approach:  "We mustn't confuse others by stating we are a Catholic institution of higher education, but then sanction a sodomy club."
Or this:  "We mustn't confuse others by stating (infallibly at that) that only men can be Catholic priests, but then sanction women-led liturgies."
I could go on, but I have to go find some Pepto-Bismol.
Posted by thetimman at 7:25 PM

"Nuns with guns" was that your google search? LOL!

See, your readers are helping you find some great topics to post. . . .the blog is still "almost" running itself!

I can't stand the overdose of irony that Sr. Louise Lear's antics always provide. On this very day, her beloved St. Cronan's, of which she is the pastor (or rather the distaff member of the "Pastoral Team"), on this very day her own website honors IRA gunman and suicide Bobby Sands.

The Provisional IRA. Ain't that a gun club too, Sister?

Give me a break. It reminds me of an old AL Franken skit about the "GAY COMMUNIST GUN CLUB".

If someone started a Gay, Communist Gun Club at SLU Sister Lears would be first on board to demand the group get University recognition.

Maybe we're being a little too hard on Sister Louise Lears.

1.) Unlike Marek Bozek she at least showed up at her "cononical admonistion" hearing.

2.) Unlike Fr. Gerry Kleba, Sr. Lears had the restraint and good taste not to publish her notes from that meeting on a dissenter website in order to embarrass Archbishop Burke and the Archdiocese.

3.) All in all Sr. Louise has been remarkably self contained since her initial hearing which indicates that she is taking the situation seriously.

4.) Heck, when you think about it she's acting more like an obedient and respectful priest than Kleba and Bozek.

5.) Almost makes you wonder. Maybe women do have a better temperment for Holy Orders.

Compared to Doyle, Bozek and Kleba she looks positively like a Monseigneur.

She may get a female priesthood after all just based on the bad behavior of the dissident men.

You stole my thunder. This is pretty much what I would have said.

Guns are morally neutral, sodomy is not. Which one will you defend?

I think you have a good point, in that Sr. Lears has at least had the courage of her convictions and has acquitted herself better than the others you mention. And I don't really mean to single her out on this post more than the other signers of that silly letter, other than that she has been in the public eye on questions of the faith lately.

And I will go farther and say that though she has continued to push her theological agenda despite admonition, she has not placed the spotlight on herself for her own advancement, unlike Bozek. But she does continue to hold out as "co-pastor" at St. Cronan's, and that isn't a good place to be.

The point isn't over whether she has admirable qualities. Being a priest is a call from God, and not based on one's own merits. Her theology of the priesthood is not sound. And if she continues to promote women's putative ordination she will continue to confuse and mislead the faithful.

i was thinking of the subtitle, "Git 'er dun!"

"On this very day, her beloved St. Cronan's, of which she is the pastor (or rather the distaff member of the "Pastoral Team"), on this very day her own website honors IRA gunman and suicide Bobby Sands.

The Provisional IRA. Ain't that a gun club too, Sister? " - anonymous

I'm unable find Sr. Lear's website blog about Bobby Sands that you mention. Would you please make public that address.