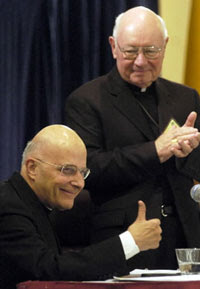 From a story at CNS concerning topics for the upcoming U.S. Bishop's meeting in June, there are some items of interest:

Liturgy, stem cells, sex abuse among topics at bishops' June meeting
By Nancy Frazier O'Brien
Catholic News Service
As they begin what Bishop Arthur J. Serratelli of Paterson, N.J., chairman of the USCCB Committee on Divine Worship, called "the final phase of the process of translation and approval of the Roman Missal for use in the United States," the bishops will vote on a new translation of the proper prayers for each Sunday and feast day during the liturgical year.
But in a break from previous practice, the 700-page draft text of the readings was distributed to the bishops not on paper but only in electronic form, except for special requests.
"In an effort to save on paper and to 'go green,' we've been trying to get people using the Web more" for documentation ahead of the bishops' meeting, said Mercy Sister Mary Ann Walsh, director of media relations for the USCCB. "The liturgy document is so large it seems wasteful" to print copies unnecessarily, she added.
__________________
As any semi-regular reader of this blog knows, I do not buy into the environmentalism-as-religion thing. I don't buy into the man-made global warming hoax. And I might say that to be used for the printing of the Mass and readings would be a glorious end for any tree.
What I do know from experience with my parents and grandparents is that (with exceptions, obviously-- this is a general observation) the older a person is the less likely they are to be adept at using electronic media, computers, and similar gadgetry. With most Bishops over age 50, I wonder whether the lack of paper copies of such an important document will mean that it is not as carefully read. I'm serious. When the USCCB has translators "assisting" it who can translate "pro multis" as "for all", I would like their work very carefully checked. In the spirit of helping out, I would like to point out that "credo" means "I believe", not "we believe".
And really, do we need to hear that the Church is "going green"? Symbolic public relations gestures to please the secular press seem silly to me. How about "going Catholic"?
____________________
On a Spanish-language liturgical matter, the bishops will be asked to approve a change from the formal "vosotros" to the more familiar "ustedes" in Spanish-language Masses in the U.S.
Although both words mean the plural "you" in English, "vosotros" is "no longer current speech" in most of the Spanish-speaking world, except in Spain, Bishop Serratelli said in an introductory note to his fellow bishops on the proposed change.
In 2006 the heads of 22 national liturgical commissions in Latin America and the Caribbean asked the Vatican that the order of the Mass in Spanish be published "using 'ustedes' in place of 'vosotros' since the majority of Catholics who speak Spanish (more than 90 percent) use 'ustedes,'" the introduction noted.
____________________
It is small comfort to see that the dumbing down of liturgical vernacular language is not a purely English-language phenomenon. No one argues that the Spanish-speaking faithful don't know what vosotros means. Is it too "elevated" or "remote" from the people? You know, because it's all about US.
This is the same argument that the liturgical minimalists use all the time. For instance, to get back to the English language translation of the Creed, minimalists state (without any support, mind you) that we are too stupid to understand "consubstantial", as in "consubstantial with the Father", describing Christ's Being. Well, the word is a very precise way to describe an eternal reality of our faith.
If only our Churches were equipped with some kind of pulpit, or ambo, where a priest or deacon (memo to St. Cronan's: only a priest or deacon) could give some kind of sermon, or homily-- maybe after the Gospel. If we had that, then he could explain moral and theological concepts to the faithful. Concepts like consubstantial. Or transubstantiation. Or pro multis.
I hope that happens.
Posted by thetimman at 8:42 AM

All I know about Spanish is what my Eighth grader has shown me in his textbook. However, I believe that Ustedes is in origin almost as formal as Vosostros. (One website indicated that "Ustedes" is a contraction of "Vosostros Merced" or, "Your Mercy."

It is the way the Spanish once addressed Kings in the plural. It's like the "royal we" as in "Will we will have tea now, milady?" that is "Will you have tea, my sovereign?"

To add to the question, I notice that in my son's text the Usted/Ustedes pronoun is listed as a Third person singular!

That is interesting because that lines up with the Italian formality of addressing our superiours with a polite form of address in the Third person. "Lei e molto gentile!", or "You (He) is very nice!"

I don't know if the Usted / Ustedes form of address still retains some formality. I think it does. In that case it might be the right term for addressing Our Lord, if you must have a Mass in the vernacular.

I invite anyone who knows more Spanish than I, to write in. (I know next to nothing) so the response should include a lot of folks.

if i had more time than I do I would calculate how much additional time is spent on the web reading the document, determine the kilowatt hours used to power the computers to enable the on-line reading, and then the amount of coal used to produce that many kWh.

Then email the USCCB a comparison of the environmental impact of reading things on-line vs. hard-copies.

not a gambling man, but if i were i would wager Archbishop Burke requested a hard-copy.

also, St. Cronans can use a deacon as well as a priest for that experimental speech-after-the-Gospel thing you are proposing. very novel.

Mr. Basso, thanks-- global warming has affected my brain-- of course a deacon could give a homily. I will correct that.

Vosotros is the familiar form of you (plural); I think the story means it is more formal in the sense that it is not used in latin american spanish everyday use. Ustedes is the formal you (plural), but is the commonly used word.

Stated otherwise, it is highly "formal" in latin america anyway, for a person to address "all of you" in a "familiar" way.

Vosotros is not as formal as saying "thee" in English, but think of it that way.

The principle behind the change would render the english Our Father as Our Father, Who are in Heaven, Your Name is holy. May your reign come, and may your will be done on earth as it is in heaven. Give us this day our daily bread, and forgive us our sins as we forgive those who sin against us. And do not lead us into temptation, but save us from evil.

Means essentially the same thing, and I can understand it-- unlike the way it is usually said, which completely mystifies my global warming-addled brain.

I think of myself as a liturgical minimalist, but not at all in the approach you describe. I want the priest to say and do exactly what is in the GIRMs, nothing more nothing less. [In the tradition of Fr Z: "Say the black, do the red."] Mostly, I implore priests: please don't ad lib or add additional ideas or language. Don't let the lay committees add their "we're so special" moments to the Mass either.

This article might help this discussion on which You to use.

Vostotros and Ustedes both mean you plural in Spanish. It doesn't change the meaning.

Although I'm hoping the change the por todos hombres to por multos (for all men, to for many)...