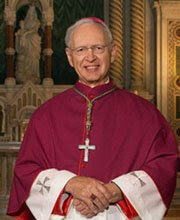 I am back from some other obligations and offer the following items:

First, Bishop Robert Hermann, above, has been named the Administrator for the Archdiocese until a successor is installed.

Next, the unrestrained glee of dissidents, nearly all of whom love to say, "I grew up Catholic," or "I've been a Catholic all my life," or "I went to Catholic schools," and then proceed to exhibit a complete lack of understanding of what the Church is or what it teaches, and end up by stating the most puerile mocks and slanders is, as predicted, in full force.

Adding to what a commenter to the post below noted, Charlie Brennan is living proof that you don't need talent, a working brain, integrity or good judgement to land a radio gig. His own comments were execrable, but the slanders he allowed callers to state-- not only without correction, but with his understanding-- were breathtaking.

Ignatius Press' Blog and American Papist have also linked to this site, thanks again.

STLToday story in the wake of the Archbishop's press conference at the link.
Posted by thetimman at 3:09 PM

I don't listen to Charlie Brennan--by the grace of God! Brennan had also, on Good Friday no less, compared Bp. Braxton of Bville with Obama's Wright, saying they were both thieves. This was of course untrue for both clergymen. But that didn't stop him.

I heard Mark Reardon's show today, which probably was not much better. He's not Catholic but commented that a lot of Catholics are probably glad he's leaving. The resident Catholic on his Friday round-table was of course a Dem who also expressed the happiness that many would feel from his excellency's departure. I turned it off. I decided I didn't want to hear what callers said in the next hour. Outrageous and offensive..and very sad that folks feel such hate.