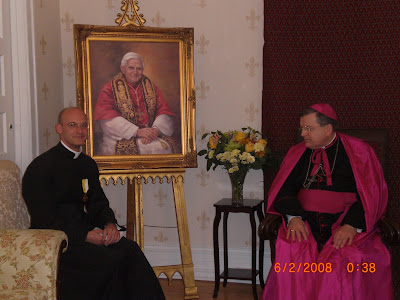 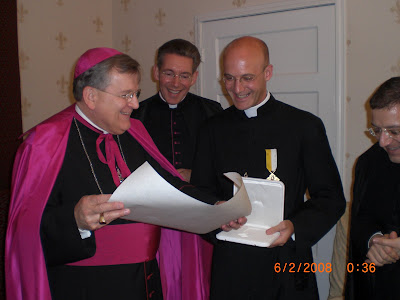 From the Institute of Christ the King, Sovereign Priest:

Last Monday, June 2, His Grace The Most Reverend Raymond L. Burke, Archbishop of Saint Louis conferred the Papal Medal “Bene Merenti” on Abbé Alexander Willwebber of the Institute of Christ the King Sovereign Priest for his restoration work on several historic Catholic churches here in the United States. This award is given by the Holy Father himself for outstanding good works for the Church.

Abbé Willwebber has been the artistic consultant for several restoration projects entrusted to the Institute of Christ the King all over the world and in the USA, like St. Mary’s Oratory in Wasau, Wisconsin, the Shrine of Christ the King Sovereign Priest in Chicago, Illinois, Old St. Patrick’s Oratory in Kansas City, Missouri, and St. Francis de Sales Oratory here in St. Louis, Missouri. While each of these edifices were designed in a different style—St. Mary’s in American Neo-Gothic, the Christ the King Shrine according to early Baroque churches in Rome, and St. Francis de Sales in German Gothic—the work of Abbé Willwebber has enabled each of the churches to recapture its original beauty.

A fine example of Abbé Willwebber’s work is the newly restored North Sacristy of the Institute’s Oratory here in St. Louis. The sacristy, which is the vesting area for the priest before he celebrates Mass, has been restored to resemble a chapel built for St. Louis of France, the patron saint of our city.

Well this didn't appear in the Review! Go figure! We need to call on the Editor to be replaced with someone who is Catholic. Do I get a second?