Buckley on the New Mass 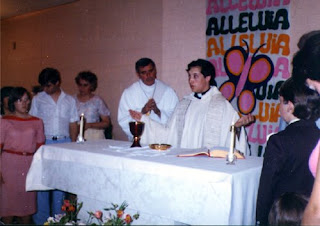 The Remnant has posted an old piece from one of its issues back in 1979, attributed to William F. Buckley. As usual, it is tongue-in-cheek, but an interesting take nonetheless:
William F. Buckley on the New Mass

(The following was reprinted from The Remnant's May 15, 1979 edition. Unfortunately, I don't have a footnote for it but as my father attributed it to the late Mr. Buckley at the time, I can only conclude it is, in fact, his. It certainly seems to be, as Buckley's inimitable style is unmistakable. In any event, it's spot on and deserves longer play no matter who said it. Pray for the repose of the soul of Mr. Buckley who died this year. In many ways, that brilliant man was also a casualty of the Spirit of Vatican II. MJM)
As a Catholic, I have abandoned hope for the liturgy, which, in the typical American church, is as ugly and as maladroit as if it had been composed by Robert Ingersoll and H.L. Mencken for the purpose of driving people away.
Incidentally, the modern liturgists are doing a remarkably good job, attendance at Catholic Mass on Sunday having dropped sharply in the 10 years since a few well-meaning cretins got hold of the power to vernacularize the Mass, and the money to scour the earth in search of the most unmusical men and women to preside over the translation.
The next liturgical ceremony conducted primarily for my benefit, since I have no plans to be beatified or remarried, will be my own funeral; and it is a source of great consolation to me that, at my funeral, I shall be quite dead, and will not need to listen to the accepted replacement for the noble old Latin liturgy. Meanwhile, I am practicing Yoga, so that, at church on Sundays, I can develop the power to tune out everything I hear, while attempting, athwart the general calisthenics, to commune with my Maker, and ask Him first to forgive me my own sins, and implore him, second, not to forgive the people who ruined the Mass.
—William F. Buckley, Jr. (circa 1979)
Editor, National Review
Posted by thetimman at 3:19 PM