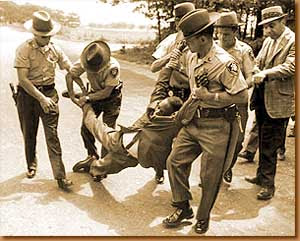 I was wondering recently why the June 15, 2008 edition of the St. Cronan bulletin wasn't posted online as promptly as usual. Well, maybe I found out why.
The Pastors' Peace (sic) column sinks to a new low. In it, Fr. Kleba (the actual pastor) relates a thinly-veiled "parable" that, while not doing so explicitly, invites comparisons of the Archbishop and/or his supporters to George Wallace and other segregationist figures during the civil rights movement, such as KKK member Bull Connor, Leander Perez and Orville Faubus.
To be perfectly clear, Fr. Kleba does not come out and say that the Archbishop and/or his actions resemble these figures. This is for the reader to decide. If you go to the bulletin link here, and scroll down past the prayer request for "Ree Hudson rcwp", past the ad for the Pridefest Interfaith prayer service, past the CODEPINK Rush Hour Bannering blurb, and past the T'ai Chi Chih notice, you will find it.
Titled "A True Parable", Fr. Kleba relates his experience visiting the home of a couple in Louisiana in 1983, and seeing a news story that the legislature had decided to increase the retirement pay of former governor George Wallace because of special health needs following the assassination attempt on him. Fr. Kleba writes that his friend, who is black, expressed some sympathy for Wallace by stating he wanted to make sure the funding wouldn't be revoked later and thus force Wallace to end up in a "rat hole". Fr. Kleba was surprised, and expressed his opinion to "let him end up in a rat hole".
Father then writes the following lines:
Tom said, "Father, you always have to remember who our friends were during the movement."
"So tell me Tom, who were our friends?"
Tom studied me to see if I was ready to hear the truth, and then he continued. "Father, our friends were George Wallace, Bull Connors (sic), Leander Perez and Governor Orville (sic) Faubus."
"They were our friends"? I questioned in shrill disbelief.
"Yes, Father, they were our friends because they got us on television. We could have never purchased the publicity that we got for free. If they had been the slightest bit reasonable and compromising, there wouldn't have been a story. No one would have known of the blight (sic) of the black people in America, but bad news is news. But when Bull Connors (sic) came with the police dogs and fire hoses, when Governor Faubus stood at the entrance of Central High School in Little Rock, when Leander Perez still had slaves on his Louisiana plantation in the 1960's and when Governor Wallace blocked the doors at Ole Miss; it was world wide news. It was on NBC and it was in Time and the New York Times. That was more media coverage than we ever anticipated. That provided the impetus for the progress that we have seen."
It was a day of great enlightenment from a major wisdom figure in my life. I wonder where anything like that is happening today. There is no resurrection without Good Friday.
Thus ends the piece with the signature "gjk".
There is much I could say about this most unfortunate article, but most of it is quite obvious. I wonder if love of one's enemies would excuse the position that Father would let Wallace end up in a rat hole. I wonder if inviting a comparison between racist figures and his Archbishop is a part of tolerance, or inclusiveness, or peace, or justice, or love, or compassion, or any of the other planks in the Cronan's creed. I also wonder how easy it is to rationalize disobedience to the Church and then to compare yourself to the heroes of the civil rights movement.
But I guess the one line that stood out to me more than any other is the one most indicative of the dissidents' method in trying to avoid accepting truths of the faith that must be definitively held--
"I questioned in shrill disbelief."
In my opinion, this article is unseemly, embarassing, invites disrespect of Church authority and crosses the line of good taste.
Posted by thetimman at 1:45 PM

It really seems like the more righteous you are, the more enemies you have. Our Archbishop has Satan working overtime to silence him!

I said it once and I'll say it again...These people are NUTS!

They like to stand and protest, I thinkg we should stand in front of their commuunity and protest until the Archbishop closes this place and retires this priest OUT of this diocese.

Its time for the voices of the REAL faithful to stand up against this junk!

Thanks thetimman! Keep posting until the Archbishop does something.

Looking at this post and one or two below all things are coming together with every detail showing the hand of Providence.

It won't be long now.

Lighten up Francis? That is one of the most funniest things I have ever read on this blog!

However, the truth is the truth!
It's amazing to me that some people see the truth when it goes against them as attacks. And then they say "your mean".

This is so simple. To be Catholic means to hold ALL the truth that Christ handed down through apostolic succession. That means the Pope, who IS the Vicar of Christ, the bishop who IS successor of the Apostles. Listen to them who have authority over you. Its for the salvation of your soul.
You can have all the soup kitchens you want, but that does NOT save your or their soul!

I say, thetimman, keep up the good work!

The Voices of the REAL Faithful stand firm.