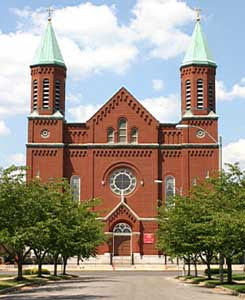 Fr. Bozek sent one of his famous general emails putting his spin on the Board takeover attempt:

During its extraordinary meeting on Thursday night, June 5, 2008, the Board of Directors of St. Stanislaus Kostka Parish voted to dissolve itself. Having reached a deadlock situation at two consecutive votes (three against three) the majority of the Board reached the conclusion that the BOD had become incapacitated and cannot fulfill any longer its functions properly. It has been decided that the members of the Parish should elect 6 new members of the Board during our Annual Parishioners Meeting. During the same meeting a new set of Parish Bylaws will be presented for the parishioners to vote upon. Meanwhile, to assure the proper functioning of the Parish, Dr. Joseph Rudawski was named "Acting Treasurer". Dr. Rudawski will oversee all the ongoing business of the Parish, i.e.: make sure that all the bills are paid on time, all the necessary reparations are being done, etc. The Acting Treasurer has no power to make any lasting changes to the present status quo of the Parish or its finances, his only job is to make sure that the Parish continues to function as smoothly as possible until the new Board of Directors is elected in August.

At the near future you may hear other versions of what transpired this evening, there will be people acting with ill intentions in an attempt to destroy the unity of our Parish. Please, do not pay attention to such individuals and their manipulations of the truth. Should you want to ask more detailed question, feel free to contact Dr. Rudawski (----------) or myself (----------) directly.

It is my belief that the decision reached tonight was the best available way to resolve the existing division and deadlock within the Board. At this point the Board is giving the power to the people, recognizing that it is called by the people of the Parish and serves at the pleasure of the people of the Parish, and not anyone's particular agenda. Dr. Rudawski, myself, and our legal counsel (George Von Stamwitz) will draft revised Parish Bylaws that will allow our Parish to function within the new reality (after the excommunications and the Pastor's laicization) and provide clear separation of the responsibilities between three different governing bodies: the Pastor, the Board of Directors, and the Parish Council. I am convinced that asking all registered Parishioners to resolve the existing impasse by a democratic vote is indeed the best, and also the American way of moving forward and building a bright future for St. Stanislaus Kostka Polish Roman Catholic Parish now and for generations to follow.

I kindly ask that you share this information with your friends and other parishioners who may not have the Internet access. Please remember me and our Parish Family in your prayers as I continue to pray for each one of you.

You see, Bozek wants power to the people. Right on--that is, if you agree with him. And by his words he seems already to have given up on escaping laicization. He is all about himself; though he always was, of course, at least the veil is rent for those who will see.

Also, Bozek has hired a civil lawyer, George von Stamwitz, an environmental lawyer at Armstrong, Teasdale in St. Louis.
And who is he? In what can only be considered as par for the course in this strange case, he happens to be the person appointed by the so-called Ecumenical Catholic Communion (ECC) as its chancellor.

The ECC has been in the news lately for its local St. Louis "community" of Sts. Clare and Francis, led by female "priest" Jessica Rowley and openly homosexual priest Frank Krebs.

Another organization in opposition to the Catholic Church.

Though birds of a feather may stick together, the reconciliation of Ed Florek may portend more good things to come. This thing hangs by a thread, and prayer is needed.

More as it comes.
Posted by thetimman at 3:48 PM

What is particularly distressing is that their website dares to invoke the name of John Paul II when all that Bozek stands for and his schismatics is completely contrary to the teaching and discipline of the Venerable JPII. May his intercession prevent this community completely falling into nouveaux Protestants.