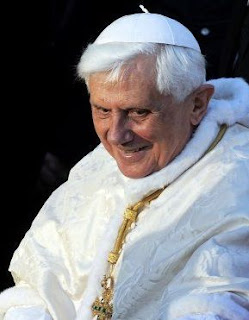 Again, NLM is in the lead on this item in the US, posting the work of Andrea Tornielli concerning the state of Vatican-SSPX negotiations. Contrary what was speculated by some, the five "conditions" given by Rome prior to lifting the excommunications are not onerous, and indeed can be interpreted quite favorably by the SSPX should it commit to them. Nothing touching on matters of doctrine in dispute. I am constantly impressed by the pastoral care of the Holy Father. Very generous, and masterfully done. I don't see how the Society can refuse these in good faith, but time will tell. Here is the story from NLM:
Regarding the proposed agreement between the Fraternity St. Pius X and the Holy See (see this and this post of yesterday), Andrea Tornielli today reports the actual five conditions. According to him, contrary to what was originally thought, these are general preconditions and do not refer to the II Vatican Council or the new Mass. Here is Tornielli's post in an NLM translation:

I have come into possession of the letter (written in French) that Cardinal Darío Castrillón Hoyos wrote to the Fraternity of St. Pius X with the five conditions in view of the reentering into full communion with Rome. In contrast to initial indiscretions, the acceptance of the Council or the new Mass is not spoken of: they are general preconditions. In fact, the Holy See, showing a great generosity, asks the Lefebvrians not to attack the person of the Pope. Monsignor Fellay has asked Benedict XVI for the withdrawal of the excommunication, so the request to respect his [the pope's] authority and not to claim any longer to be the recipients of a Magisterium "superior" to that of the reigning pontiff seems a condition of common sense! This is the text of the letter bearing the signature of the Cardinal president of Ecclesia Dei:
Conditions resulting from the 4 June 2008 meeting between Cardinal Darío Castrillón Hoyos and Bishop Bernard Fellay:
1) The commitment to a proportionate response to the generosity of the Pope.
2) The commitment to avoid any public intervention that does not respect the person of the Holy Father and that could be negative for ecclesial charity.
3) The commitment to avoid the claim of a magisterium superior to the Holy Father and not to propose the fraternity as opposed to the Church.
4) The commitment to demonstrate the will to act honestly in full ecclesial charity and respect of the Vicar of Christ.
5) The commitment to respect the date - set at the end of the month of June - to respond positively. This will be a condition required and necessary as immediate preparation for the adhesion to have full communion ("come preparazione immediata all’adesione per avere la piena comunione").
Posted by thetimman at 10:35 AM

Condition #3 is the make-or-beak condition... but it's also -- like the documents of Vatican II! -- capable of being understood in either a narrow or wide manner, a modern or a traditional manner. My guess: this deal will not be accepted but a different one will by Christmas of this year.

I'm going to have to disagree with HC's take on it, I definitely think this is going to happen and what we are seeing now is the second part in the diplomatic dance between Bishop Fellay and Dear Papa, His Holiness Pope Benedict XVI.

The first part was definitely the issue of HH's motu proprio back in July '07. Here's part of Fellay's Response:

" The letter which accompanies the Motu Proprio does not hide however the difficulties that still remain. The Society of Saint Pius X wishes that the favorable climate established by the new dispositions of the Holy See will make it possible – *after the decree of excommunication which still affects its bishops has been withdrawn* – to consider more serenely the disputed doctrinal issues."

The asterisks added are mine. Pope Benedict has just opened the door, with the carrot of removal of excoummunication as well as the promise of continuation as a *Personal Prelature*.

Cardinal Ratzinger-now-Pope Benedict XVI has been working for a long time on getting the SSPX back into the Fold, and getting them back in now would add yet another valuable tool and ally in smacking down the "in the spirit of Vatican II" liberals.

Pray, and pray hard, that this comes through.