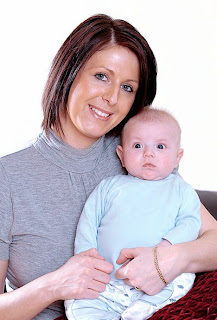 This woman decided to kill her baby because the baby might have a kidney condition that could cause his death.  This passes for logic in this culture of death.  But God had other plans, and as He does so often, He blessed this mother in spite of it all.  This story is compelling to me on several levels. First, praise God that this baby survived and his mother has a chance to repent and do right by this little miracle.  Second, I can't understand why the mother would allow her picture to be plastered in the newspaper.  Finally, it is another one of the hundreds of millions of reasons to prove that abortion is an unspeakable evil.  From the Daily Mail:

Mother's anger turns to delight after her baby survives an abortion

Finley Crampton really shouldn't be here. Although his parents would have loved another child, they knew their baby could inherit a life-threatening kidney condition – and they couldn't take the risk.

After all, their first son had died of the condition and the second was born with serious kidney damage.

So when Finley's mother, Jodie Percival, became pregnant while on the Pill, she and her fiance Billy Crampton, 35, made the agonising decision to abort this child.

'Deciding to terminate at eight weeks was just utterly horrible but I couldn't cope with the anguish of losing another baby,' said Miss Percival, 25.

However, Finley had other ideas. And some time after the operation, Miss Percival felt a fluttering in her stomach.

Eventually her doctor sent her for a scan – and she discovered she was 19 weeks pregnant.

The child had survived the abortion and thrived in the womb. 'I couldn't believe it,' said Miss Percival. 'This was the baby I thought I'd terminated.

'At first I was angry that this was happening to us, that the procedure had failed.

'I wrote to the hospital, I couldn't believe that they had let me down like this. They wrote back and apologised and said it was very rare.'

But a week later, another scan confirmed that this baby had kidney problems too, like the couple's previous children.

Miss Percival carries a gene which triggers multicystic dysplastic kidney – which causes cysts to grow on the kidneys of an unborn baby.

Her first baby, Thane, had lived for only 20 minutes after she was forced to deliver him prematurely.

Her second son, Lewis, now 20 months, was born with a similar condition. He survives on one kidney.

However, doctors told the couple from Sutton-in-Ashfield, Nottinghamshire, that this child was likely to survive, so they decided he deserved a chance.

And in November, Finley was born three weeks premature, at 6lb 3oz.

He had minor kidney damage but is expected to lead a normal life.

'I knew if that operation hadn't failed he wouldn't have been there,' said Miss Percival, a hairdresser.

'I just couldn't believe that this child had got through it all and looked so perfect.

'He may need an operation but as only one of his kidneys is affected he can survive.

'I still struggle to believe just what he has fought through. Now he's here I wouldn't change it for the world.'

Posted by thetimman at 7:01 PM

WOW! I could not have posted my picture and wrote that story, but this could be a start of conversion for her. Maybe she won't contracept anymore. Very interesting names, I might add.

Thanks be to God for this miraculous birth! This article, while very good news and yet another affirmation of the Power of God, is absent of any indication that the mother understands and accepts the consequences of the culture of death.

"Now he's here I wouldn't change it for the world."

Does she not know that he was 'here' from the moment he was conceived?

When my wife and I read this story we were both struck by the lack of remorse on the mother's part. She doesn't denounce her decision only enjoys the lucky outcome of a bad medical procedure. We pray in time she will correspond to the Graces that are being sent her way.

I agree that the lack of comprehension and thus repentance seems indicated by this story. It is one of the reasons why I chose the headline for the post as I did. We can only hope that this baby's presence day after day will make something inside her "click" and then she can see.

Why couldn't this have been me!? Her stupidity and selfishness was blessed with a miracle!!!!!!

I aborted my first child at the urging of my urologist and first husband. I was on a new antibiotic at the time of conception that was thought to cause lack of main extremities to unborn babies. (now they know it is cautiously safe to take)

For months after the abortion, I literally had to pull over every time I drove to let out my animal sounding cries of agony. I contemplated suicide.

I now have a wonderful husband and am blessed with several children, but will NEVER stop longing for my first.

I have been forgiven by God through the beautiful sacrament of confession. But the pain will be with me for the rest of my life.

All women contemplating abortion should talk to someone like me who regrets it every single day of her life.

Heartbroken, thanks for leaving your story here. God will continue to bless you for faithfulness. I am not a theologian, but I pray that these little ones will be seen by God as martyrs, like the Holy Innocents, and will run to greet their parents who make it to heaven.

My prayers are with you.

The woman in the article said she just couldn't bear to lose another child...so she chose to abort...AND LOSE ANOTHER CHILD. Does she not see the connection? What a heartbreaking story...with a good ending. :-)

A tear came to my eye, literally, reading your story. I think it needs to be told to a wider audience. While my audience may not be very wide, nonetheless, I've taken the liberty of copying your comment and relaying it to my readers at saintlouisconservative.blogspot.com.

I hope you don't mind.

My prayers are with you too.

I do not mind you posting my story on your sight. I would like for people to know the horrible agony that women may suffer after abortions.

I have thought of speaking about my story, mainly because I really felt pressured by my doctor, and I think that doctors should be held liable if they are not forthcoming about abortion, even revealing the emotional damage it has on the women.

My children are young and do not know, and I really am afraid of what they may think of me if I tell them what I did to their half sibling. So, besides my parents and some very good friends knowing, it is my painful secret.

I understand your concern for your children's welfare and admire it.

In light of your comment, though, I wanted to let you know my wife's reaction to your story. Her first question was to ask if you were telling it publicly. She thought doing so might do some good.

Unfortunately we both know that the battle against abortion (absent direct miraculous intervention) will still be underway when your children are grown. When the time is right for you and your family, please consider speaking out publicly.

Someday when my children are old enough to realize that their mama is not really the perfect person they imagined, I'll tell them my sad story.

I will pray about your suggestion, as I have had a little nagging thought for two years about possibly speaking out about my story. I even have a lot of experience with public speaking professionally.