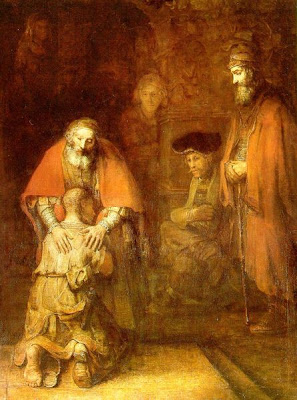 Wonderful, wonderful news! Laudetur Jesus Christus!
I was driving back from visiting my newborn niece in the hospital when my wife called me with the following fantastic news. Kudos to the St. Louis Review on this one:
Excommunicated St. Stanislaus member reconciles with Archbishop Burke, Church
Edward Florek, excommunicated in December 2005 for being part of the St. Stanislaus Kostka Corporation board of directors that fought Archbishop Raymond L. Burke over parish restructuring, privately met with the archbishop this week and was reconciled with the Church.
Florek, 63, a St. Stanislaus parishioner for 33 years since coming from Poland, said he broke ranks with the St. Stanislaus board in March. He told the Review he had concluded that Father Marek Bozek, whom the board hired as its pastor after the archbishop recalled the parish’s priests in 2004, was leading the parish away from Roman Catholicism.
He said he stopped attending St. Stanislaus Church in March when Father Bozek "refused to enter discussions with the archbishop."
"Most important for me, I didn’t see the solution (being) under Father Bozek’s guidance," Florek said. "I would like us to be part of the Roman Catholic Church."
The reconciliation occurred June 2 at the Catholic Center in the Central West End. Florek said he initiated the meeting with Archbishop Burke through a phone call to Msgr. Vernon Gardin, a vicar general for the archdiocese.
Florek is the only one of eight excommunicated St. Stanislaus board members to seek a reconciliation with the archbishop. The board represents St. Stanislaus Kostka Corporation, which the archdiocese considers a civil organization and no longer a parish.
When they met, Florek said, he prayed the Nicene Creed with the archbishop then took an oath of loyalty to him and the Catholic Church. For that, Florek was "restored to the full communion of the Roman Catholic Church," according to a decree from Archbishop Burke.
"I am profoundly happy that Mr. Florek has reconciled himself and is now, once again, in full communion with the Roman Catholic Church," the archbishop said in a prepared statement after the meeting. "His return gives hope that other board members will return home to the Catholic Church. I ask the faithful of the archdiocese to continue to pray for that intention."
Florek said the situation at St. Stanislaus, founded by Polish immigrants in 1880, is "complicated."
In 1891 Archbishop Peter Kenrick allowed the parish to form a lay trustee board to control parish finances and own the parish’s property. Shortly after Archbishop Burke began his duties in St. Louis in 2004, he continued the effort Archbishop Justin Rigali had started the year before to persuade the board to transfer property ownership to the archdiocese.
The board, stating concerns over the future of the parish should it allow the property transfer, publicly stated that it could not reach an agreement with the archbishop.
Archbishop Burke later declared the parish outside the sphere of the archdiocese and excommunicated its six board members, of whom Florek was one. While Florek left the board last year, the people taking his and another board member’s slots have both been excommunicated.
Asked if he regretted what he’d done, Florek said, "I regret that we didn’t envision the harm which we did to the parish and St. Louis.
"We worried not only about the financial angle of the parish but about the spiritual guidance. We protected the financial part of the parish but we lost on the spiritual guidance and direction leading us from the Roman Catholic Church," Florek said.
Florek said recently he has written "open letters" to St. Stanislaus members encouraging reconciliation.
_____________________
What a wonderful example of humility and quite the contrast with the defiance rooted in pride and steeped in error of the so-called pastor of St. Stanislaus corporation.
I am so happy for Mr. Florek, and he deserves a ton of credit as the first one to come home to the Church. May God bless him abundantly, and may we all follow the example of the Good Shepherd in welcoming him back.
St. Luke 15:
4
What man of you that hath an hundred sheep, and if he shall lose one of them, doth he not leave the ninety-nine in the desert and go after that which was lost, until he find it?

5
And when he hath found it, lay it upon his shoulders, rejoicing?

6
And coming home, call together his friends and neighbours, saying to them: Rejoice with me, because I have found my sheep that was lost?

7
I say to you that even so there shall be joy in heaven upon one sinner that doth penance, more than upon ninety-nine just who need not penance.

8
Or what woman having ten groats, if she lose one groat, doth not light a candle and sweep the house and seek diligently until she find it?
9
And when she hath found it, call together her friends and neighbours, saying: Rejoice with me, because I have found the groat which I had lost.

10
So I say to you, there shall be joy before the angels of God upon one sinner doing penance.
Posted by thetimman at 1:45 PM

God Love Ed Florek and God Bless him. With this he has done much to begin the restoration of St. Stan's.

In the split between St. Stan's and the Archdiocese a signal and very crucial moment came in I believe Nov. of 2004, or thereabouts.

That's when the Board changed their own by-laws and excluded the Archdiocese's priests from their authority mandated by the original Kendrick agreement.

This is mentioned all too rarely but it is all too important since it shows that the current board DOES NOT wish run the parish in the manner of their forefathers.

QUite the opposite. And it was that break which I believe Cardinal Levada referenced last week when he stated that the break had been happening over time.

What a blessing to witness such an event. Humbling to say the least.

Thanks be to God!

The people at St. Stan's were (and are) courageous in standing up to Archbishop Burke. For more than one hundred years the archdiocese did not see the property rights issue as important -- at least not important enough to risk a breach. (Can anyone picture Jesus kicking people out of the flock because of a dispute over who would control the financial assets of a local parish?)

Excommunicating the folks at St. Stan's was not a loving step, particularly when the root issues were money and (very possibly) ego. I respect Mr. Florek's decision to leave St. Stan's and seek reconciliation with the archbishop; clearly that's what his conscience led him to do. However, this event does not mean Burke was right to take such drastic steps initially. Perhaps someday his heart will be softened and he will not be so focused on exacting obedience -- rather than cultivating respect and love -- within the archdiocese. It is never too late for such growth. May he be reconciled, in love, to the people whom he has excommunicated.

You need to take one mighty fact into your consideration. Archb. Burke didn't throw the Stan's BOD out of the Church. They threw themselves out!

Read this in the St. Louis Review of November 2004.

The Stan's BOD deliberately altered the by-laws of their agreement with the Archdiocese. This is the agreement they keep talking about. It had stipulated since the 1800s that the Archbishop was to appoint a pastor to the parish and that the priest, or pastor would appoint the Board of Directors.

That agreement held until 2004.


Then the St. Stan's Board changed their by-laws to throw the priest off the board and make him, and the Archdiocese powerless to influence their affairs.

At that point they lost all practical connection to the Archdiocese and His Grace rightfully objected to their illegal destruction of the Kenrick agreement.

At the priests' request His Grace pulled them out and excommunicated the Board members who perversely aborted the ancient agreeement.

THe Stan's BOD are the ones who got crazy enough about the land and money to throw the ARchbishop out. It wasn't the Archbishop who broke the faith. They did.

And the results are inevitable.

Half of the BOD would rather have St. Stan's belong to the Moonies than be an ordinary parish within the Archdiocese.