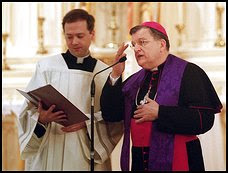 For the second straight day, the local paper of record had excellent coverage of the Archbishop's appointment to the Signatura. This time, the paper's editorial largely nails the issues involved in his tenure, except for the very end, where they take some unsubstantiated claims by the SNAP organization and run with them. SNAP will get some attention in this space later today or tomorrow. The editorial below, with my comments in green:

Sunday editorial: The true believer
by the Editorial Board

In his four and a half years as head of the Archdiocese of St. Louis, Raymond Leo Burke became a hero to traditionalist Catholics in the United States. One conservative commentator went so far as to call him “the new John Fisher for our times,” the original one having been beheaded in 1535 for his opposition to King Henry VIII’s creation of the Church of England. The comparison to St. John Fisher is apt. He is the exemplar of the brave bishop who would not flinch to stand up for the truths of the faith to the secular powers of the day. He was the only English bishop who did not cave in to the unjust demands of Henry VIII to call a lie the truth, and the truth a lie.

Archbishop Burke has been promoted to prefect of the Apostolic Signatura, a Vatican post roughly analogous to chief justice of the U.S. Supreme Court. The only higher legal authority in the church is the man who promoted Archbishop Burke: Pope Benedict XVI.

The prefect’s post generally guarantees elevation to cardinal, which means that Archbishop Burke, who turns 60 Monday, would be part of the conclaves that choose popes until he reaches the customary retirement age of 75. Actually, though the retirement age is 75, Cardinals may still vote in papal conclaves until the age of 80.

Although he is regarded as among the American church’s most conservative bishops, it’s not out of the question that Archbishop Burke could be considered papabili — papal material — himself. Joseph Cardinal Ratzinger, who became Pope Benedict XVI three years ago, also was regarded as among the church’s most conservative theological voices.We congratulate Archbishop Burke on his appointment. He clearly is more comfortable amid the scholarly and legalistic vaults of canon law than he is as a pastoral leader. In that, he is more like his predecessor and patron in St. Louis, Justin Cardinal Rigali, now archbishop of Philadelphia, than Cardinal Rigali was like his predecessor in St. Louis, Archbishop John L. May. Though an American Pope is generally considered to be highly improbable, due to the fear that such a Pope would too closely identify with U.S. foreign policy as the world's (at least for now) foremost power, such a fear would not be the case with Burke. He has already shown the courage to stand up to leaders from both parties and would not flinch to do so in the future, if necessary.

Indeed, Archbishop Burke and Cardinal Rigali are at the forefront of what could be called an “old school” movement among American bishops that places great emphasis on faithful allegiance to the church’s catechetical teachings. Archbishop May, who died in 1994, along with Atlanta Archbishop Wilton D. Gregory, the former bishop of Belleville, are more closely aligned with bishops who stress the church’s interaction with the problems of the world. With all due respect to the bishops named, "interaction with the problems of the world" in this context usually means compromising with the world at the expense of the Gospel truth.

Non-Catholics and secular institutions, including this editorial page, do not get a vote on the church’s teachings. In fact, as Archbishop Burke surely would point out, Catholics themselves don’t get a vote on the church’s teachings, either; the church is not a democracy. So we take no stand on whether Archbishop Burke was right or wrong in most of his high-profile pronouncements here. This is a wonderfully insightful point, and the Post deserves great credit in taking this position. Church doctrine is not up for a vote, because its author and source is Christ. The Church herself has no power to change it. That is what the Church-as-democracy crowd cannot seem to grasp.

We’ll say only that there sure were a lot of them. In that sense, we admire the archbishop: He wasn’t one to hide his light under a bushel. This is the best line of the editorial; the Post sees that the Bishop did his job and did not try to deflect his responsibilities, or win some P.R. contest.

Among those issues: his efforts to claim control over the finances of St. Stanislaus Kostka Church; his decision to excommunicate church board members; his discipline of those involved with an ordination-like ceremony for two women; his involvement in the dispute over stem cell research and his denunciation of singer Sheryl Crow’s involvement with a fundraiser for Cardinal Glennon Hospital. All these were internal church issues that just happened to become public. I will say, though, that these things often "just happened to become public" because the Church's enemies from within and without made them so, all too often with the willing help of the secular media.

Even his widely publicized statement that priests should deny communion to Catholic politicians — such as 2004 Democratic presidential nominee John F. Kerry — who support abortion rights was a faithful interpretation of traditional church doctrine. Hello, are any Catholics listening?

But there is one area in which Archbishop’s Burke’s actions intersected with broader public issues and for which he should be held to account. The Survivors Network of those Abused by Priests, an advocacy group, said in a statement released Friday that under Archbishop Burke, “dozens of proven, admitted, and credibly accused predator priests have been welcomed here.” The statement continued, “In fact, we believe there’s not a bishop in America who has imported so many pedophile priests into his diocese as Burke has.” Here is where the editorial goes off the rails. Just where is the corroboration for this wildly unlikely statement from SNAP? Why does SNAP always get a free pass from the press? I mean, a Bishop can't buy postage stamps without SNAP having to be interviewed. And of course no one can question the veracity of their stories, or their credibility, because they are "for the children." There is not one reported incident of Archbishop Burke defending a known pedophile priest.


That is not just a church matter. We hope Archbishop Burke’s successor will recognize that.


The sexual abuse scandal story broke in March 2002. Archbishop Burke was not appointed until 2004. How is this his problem? The vast majority of cases occurred a decade or two before his appointment. If SNAP has any statistics, I would like to see them. This whole issue is a red herring as it relates to Burke. There is no evidence of misconduct on his part, or of "coddling" pedophiles. Let's see some proof to back up statement here before treating with its credibility.


Considering the secular source, though, on balance a very positive editorial and the Post deserves some credit.
Posted by thetimman at 11:23 AM

Outstanding coverage of the Archbishop Burke story since last week. Thanks.
matt

Great post. I was even starting to get warm fuzzy feelings about Pravda West until I got to the last two paragraphs.

I would also like to see SNAP's documentation for their wild claims.

I agree Tim, an excellent editorial, except for the ending. Your comments clearly highlighted where they went wrong.

While the SNAP accusations could be leveled at a number of bishops and archbishops (LA, anyone...?) they were seriously off the mark in making them about Ab. Burke.

I would like to see a retraction or, at minimum, a challenge from the Post to SNAP to "put up or shut up"...

I find these assertions, such as that in the editorial, that really smart bishops would be better suited in academia or other jobs than bishops b/c they're lack "pastoral" skills. They are very much back-handed compliments and presume that the public know better than the Vatican as to what skills a bishop must have. [Same argument has been made re Braxton.]
***
FYI: Jamie Allman announced he's writing a book having to do with his time at the archdiocese and outside the archdiocese, his "unique" perspective. He's been critical of Burke's "lack of pastoral" approach (!). I imagine he wants to get out there early as one who "knows" this great man of God. Sigh.

The secular media is probably realizing now just how wrong they've been about Abp. Burke's alleged "bulldog" attitudes and behavior, and are grabbing at any angle to keep things "sensationalized" to sell papers and appear relevant.

Remember when journalists used to have integrity and the truth actually meant something?

doughboy said............"Remember when journalists used to have integrity and the truth actually meant something?"

No I don't. Refresh my memory.