Changes at the Oratory-- UPDATED 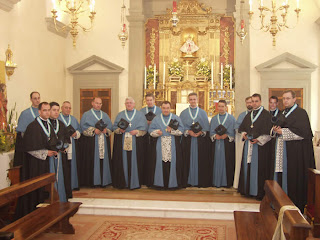 Monsignor R. Michael Schmitz, Vicar General and Provincial Superior for the United States, has written to the faithful who belong to Oratories of the Institute of Christ the King, Sovereign Priest, detailing several new priestly assignments.  These changes include those I posted on earlier concerning Fr. Karl Lenhardt and Fr. William Avis, until now of St. Francis de Sales Oratory in St. Louis.
Monsignor begins his letter by stressing the importance of the Institute's seminary in forming exceptional priests to serve the Institute's growing worldwide need.  Because the seminary is so important, Fr. Lenhardt was called to Gricigliano:
"The Seminary is the heart of every community.  Fertile ground for vocations, it is the seminary which forms future priests.  According to St. Charles, the holy Archbishop of Milan and patron of seminaries, the Superior should guard the seminary with his life.  Those in charge of the education of the young men called to the holy priesthood have a very special responsibility.
For this reason, the founder and Prior General of the Institute of Christ the King, Sovereign Priest, Msgr. Gilles Wach, has always taken great care to staff the seminary with very experienced members of our Institute.  Given the ever increasing number of American vocations among our seminarians and sisters, there has for a long time been an urgent need for a spiritual director well-versed in several languages and familiar with American culture.  Hence during his visit to the United States during the month of May, Msgr. Wach decided to select for this important task a priest well-seasoned by his many years of service, a priest in whom he has the greatest confidence for his fatherly wisdom and his well rounded personality.
At the same time, the exceptional growth of the Institute worldwide and as well as in the United States, calls for additional priestly appointments.  Msgr. Wachwill send more priests to the United States, Father Laurent Jantaud, former guest master of the Seminary, and Father Henry Fragelli, our newly ordained priest from the United States.
Thus, it is my task to announce the following changes, all of which are related to a change which is both important and essential and which will greatly benefit not only our seminary, but also all of you, dear faithful, who desire to have well-trained priests as your shepherds."
He then relates the various assignments, of which the following are relevant to St. Francis de Sales Oratory:
Reverend Father Karl Lenhardt will be appointed Spiritual Director to the international Seminary and the Sisters Adorers of the Royal Heart.
Reverend Father William Avis will be appointed as Rector of Old St. Patrick's Oratory in Kansas City and will continue his duties as Provincial Master of Ceremonies.
Reverend Father Michael Wiener, Esq., until now Episcopal Delegate for the Extraordinary Form in Oakland and Rector of the Oratory of Our Mother of Perpetual Help in St. Jose, will be appointed Rector of St. Francis de Sales Oratory in St. Louis.
Reverend Father Laurent Jantaud, until now guest master of the International Seminary in Gricigliano, will be appointed Vicar at St. Francis de Sales Oratory in St. Louis, with the special task to supervise the candidates to the priesthood and oblatehood at the Oratory.
Putting to rest some unfounded rumors, Monsignor relates that these personnel decisions had been made in May with the consent of the respective ordinaries of all of the priests involved--and that they were completely unrelated to any papal appointments in the respective Dioceses or Archdioceses.  Most of the changes will be effective following the General Chapter at the end of August.  He continues:
"Msgr. Gilles Wach and I are deeply grateful to the Vice-Provincial of the American Province, Reverend Father Karl Lenhardt, and to all our priests for their dedicated service to God and souls in their former assignments.  Special receptions are currently being organized as occasions to express publicly this gratitude.  I would encourage you to check your local church bulletin for details...
...The presence of the Institute of Christ the King in all our churches and Oratories in the United States remains unchanged.  Soon I will be happy to announce yet another apostolate of the Institute of Christ the King in this country.
Please pray for our priests, oblates, seminarians and sisters!  May God bless you all!
Yours very cordially in Christ the King,
Msgr. R. Michael Schmitz
Vicar General and Provincial Superior
We again wish Fathers Lenhardt and Avis well.  Welcome, too, to our new shepherds, Fathers Wiener and Jantaud.  You are all in our prayers.
Posted by thetimman at 8:12 AM

The Archdiocese is becoming like the St. Louis Blues: We’ve got a whole bunch of great talent that we keep trading off in their prime so they can go win the Stanley Cup in other cities. Still, kudos to Fr. Lenhardt, I know he will do very well at the Seminary, and I think that we should all be very proud that ICRSS hierarchy views both Fr. Lenhardt and Father Avis with such esteem. I thank them both from the bottom of my heart for their time here and for the love and attention they gave to their community, and I wish them the favor of God in their new endeavors.

When will the new priests arrive at the Oratory?

Where will Father Fragelli be stationed? It's my understanding that he is to be stationed somewhere in the United States.

cmziall, I think the timing may be different for each case, right now I have no info to enlighten anyone.

St. Louis Blues? No way. It's the "Rome of the West" and I think we are seeing nothing but the wonderful fruits of this title and the many graces God has so generously bestowed on us all. In fact, it's a great honor to be the "practice ground" for such holy men and although it may be sad to see them go, how wonderful to share them with the rest of the world! Now they are being given the opportunity to bring good to a greater number of people. Through and in such men, saints are made.

Here in KC, I wish Father Buchholz nothing but the best in Green Bay. While I think we are all a little shocked and very saddened to lose such a good priest, I can only pray that the people of Green Bay welcome him with open arms (and hearts!). We are looking forward to welcoming Father Avis and getting to know him better. We will take good care of him, St. Louis!
Pray for our priests!

Our loss is your gain! Those of you who are members of St. Francis de Sales Oratory in St. Louis are blessed to be getting Father Michael Wiener as your new Rector. He is a wonderful priest who has given so much of himself during his time here in Oakland, CA. Although, we are very sad to see him leave us, and will miss him terribly, we know that he will do well in his new assignment. Take care of him!

Will do. God bless.

To those of you who are connected to the institute do you think that there are any future plans of a seminary here in the states?