Is This a Rhetorical Question? 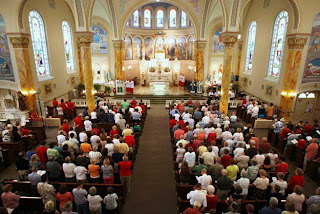 The disaster to the formerly Catholic parish of St. Stanislaus that is Marek Bozek gets more media attention in Sunday's St. Louis Post-Dispatch with an article titled "Hero? Heretic? A Parish Divided".
It is easy to be a hero to those who only seek to thumb their noses at the Church.  Any cheap theatrics, no matter how unoriginal, how illogical, or how self-destructive, will do.  The above article is a relatively good survey of the issues involved, and is instructive for what Bozek's supporters now admit openly.  The photo above by Emily Rasinski is from the story, and was taken at the St. Stan's "polka Mass" (shudder).  At least there is finally a picture to take the place of the well-worn images of Christmas Eve 2005.
Ever in the role of the drama queen, "pastor" Bozek no longer attempts to hide his full agenda-- namely, whatever benefits him personally (in the purely temporal sphere, obviously).  He wants a bachelor pad so he can live unobserved by the rectory staff (why is that, I wonder?); he wants a BMW (cool-- goes with the pad); he wants big money to be the front man for the movement, just like any political boss; and, while we're at it, make him a Bishop, too.
Some interesting excerpts from the article below, with my emphases:
...For many St. Stanislaus parishioners whose ancestors had built the church just north of downtown, Bozek became a hero.

But more than two years later, Bozek has reshaped the church into a community that would be unrecognizable to those 19th-century founders.
His vision for a reformed Roman Catholic faith calls for supporting female ordination, allowing priests to get married and accepting gay relationships. Bozek's stands have attracted hundreds of new St. Stanislaus parishioners who share the priest's reform-minded vision.

But they have also divided the church, pitting newer members against traditional parishioners unhappy with how far the priest has gone in condemning the Roman Catholic church.

There have also been questions about the priest's trappings. He has negotiated a 143 percent salary hike, moved into a $157,000 Washington Avenue loft and leased a 2008 BMW for $450 per month.

Some parishioners point to another sign that alarmed them: Bozek, while in Poland last year, bought a silver ring custom-made for a bishop there. When he returned, he showed the ring to his parish at a Sunday Mass and spoke about it from the pulpit.

Because it's a bishop's ring and he is only a priest, Bozek says, he has not worn it. But he won't say he never will — he does not rule out the possibility of becoming the leader of what he calls an "underground Roman Catholic" movement.

The three parish leaders who recruited Bozek say they now regret it.
St. Stanislaus "is now home to anyone who has a gripe with the (Catholic) church," said Stan Rozanksi, one of the men who vetted Bozek and a former board member.
[...]
Richard Bach, who heads a group called the Concerned Parishioners of St. Stanislaus, said a large number of older members — about 100 families — had gradually come to oppose Bozek's leadership and the new members.

"They're concerned about the path of the church and where he's leading them," Bach said. "A lot of the old parishioners don't consider the new ones parishioners at all."

"Before Bozek, we were all together," he said. "Our fight was about property, but never about religion. The people who have come here since then are here for different reasons. ... Where are they taking this church?"

Marybeth McBryan, one of the church's newer members, said she came to St. Stanislaus because it was more inclusive and accepting than her previous parish.

"There's a group of parishioners who have been there a long time and who don't like change," McBryan said. "They are not very fond of us who are not Polish."

Timothy Kyle, who joined the church about six months ago, says longtime members want Bozek "to break the rules important to them, but not stand up for the ideals and beliefs he has himself."

"If you hire someone who doesn't follow along the dotted line," Kyle said, "you can't expect him to follow it when you want him to."
[...]
But longtime parishioners were further put off when Bozek negotiated a new contract with the board.

Bozek's contract was up last December, and he had several demands.

He wanted to move out of the rectory. He wanted a big salary bump. And he wanted a new car. He got what he wanted.

He moved into a downtown loft; he started driving a new BMW; and his salary jumped to $56,000 from $24,000.
[...]
Bozek said he needed to move out because it was "exhausting mentally" for him to live in a busy rectory, where he rarely had time to himself.
[...]
In the meantime, Bozek awaits word on whether he will be laicized — or defrocked — by Pope Benedict XVI. Burke began the process of laicizing Bozek after the priest took part in the Roman Catholic Womenpriests event.

The Vatican has not yet ruled on the matter. But Bozek has already been planning for a St. Stanislaus whose ties to the Vatican could be severed.

In May, he said he'd been in talks with Married Priests Now! representatives. The organization is led by Archbishop Emmanuel Milingo, an excommunicated Zambian archbishop who is married. The group, funded by the Rev. Sun Myung Moon, promotes a married priesthood.

News of the Milingo talks angered some parishioners, and Bozek backed away. He now insists that the church will remain Roman Catholic.

But if the archdiocese refuses to make peace, he said, St. Stanislaus could join with other "independent" churches — inside and outside St. Louis — to form an "underground Roman Catholic church."

For example, he has been in discussions with Rose Marie Hudson and Elsie McGrath, the two women ordained as Roman Catholic Womenpriest clerics. They are co-pastors of a congregation of about 25 people called the Therese of Divine Peace Inclusive Community in St. Louis.

Bozek also has spoken with the Rev. Frank Krebs — pastor of the 90-member Sts. Clare & Francis in Webster Groves, which is separate from the Vatican — about joining Bozek's "underground" network.
[...]
"If the hypothetical happens and if the people elect a bishop — and that's the way it should be done — then whomever is asked by the people to be bishop should do it," Bozek said.

For now, he hangs on to the silver bishop ring he bought while in Poland last year. He spotted it at his favorite jeweler in his hometown, and it was made for a former teacher of his, an auxiliary bishop in a Polish diocese.

That bishop actually asked for two rings to be made. He kept a gold version, but left the silver ring — adorned only with a Jerusalem cross — behind.

Would Bozek accept a call to be the bishop of an "underground" Roman Catholic church?

"Yes," he said. "I would do it."
__________________________
So, the choice is simple-- follow Bozek and become part of Rose, Elsie and Frank's Church of the All-important Freedom of Sexual Proclivities, or just be Catholic and reject him.  Sex and money-- an old story.
The fact that Bozek has been forced to retreat from the Milingo affiliation (however temporary the reticence proves) gives me the intestinal fortitude to continue covering this story from a Catholic perspective.  I really think Bozek was on the brink of being booted before the most recent events.  Is there anyone at St. Stan's who cares about the Faith?
Posted by thetimman at 1:34 PM

Following a trope of Walker Percy's in his novel "Love in the Ruins", I ask.

How will Marek and Frank's "underground Catholic Church" handle the inevitable "pastoral" problem of how to deal with gay nuns who wish to re-marry without annullments.

Or, maybe they already have.

This situation is so sad. Here in Kansas City we lost our Polish member church of St Stan's in 1990.

And as a Polish Catholic family, it is not true non-Polish people are disliked.

To have a Polish speaking priest, must have been a dream come true at first for the members. Polish people are very faithful to Rome and traditions of the Church.

Our St Stan's had the traditional Corpus Christi procession for years before Bishop Finn came. But, we sang Polish songs not Latin.

Your question of "who cares about the Faith?" fails to give credit to those who brought the current lawsuit to bring the Parish back into the archdiocese.

We care and we also understand that this will not happen until the flim-flam man is gone.

Please try and remember that repentence and forgiveness require loving reacceptance into the fold, unless of course you reject the premise of the -parable of the Prodigal's son.

You and your fellow parishioners will be in my prayers. This is shaping up to be a very sad story indeed.

Anon @ 08:15 - my wife and I continue to pray for your parish and that they will see that Bozek has led them far away from Holy Mother Church.
It is a shame to the holiness of your fellow countryman John Paul 2 that faith is seemingly forgotten as it is trappled upon by Bozek as he screams "I will not serve!"