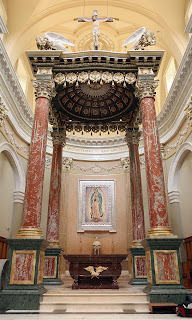 From the Lacrosse Tribune comes the story of the dedication. Click here for a very nice, interactive photo/video site.
A place of pilgrimage: Hundreds gather for Shrine Church dedication
By JOE ORSO La Crosse Tribune
A new chapter in the life of the Roman Catholic church in the Coulee Region begins today, the first day the Shrine Church of Our Lady of Guadalupe is open to the public.
Nine years after Archbishop Raymond Burke, former bishop of the La Crosse Diocese, first announced plans for the shrine, he dedicated the church at a Mass on Thursday that lasted more than three hours.
Now, with the centerpiece of the shrine complex complete, the success of the shrine lies largely in how the public, locally and around the world, receives the site Burke calls a place of pilgrimage.
“What happens here today with the dedication of this church is the reason for everything else that’s happened this week,” Burke said in a Thursday morning interview, referring to a week of events that began Monday and will last through Sunday.
[...]
About 450 people filled the church for the dedication Mass, with hundreds more gathered in the basement and around the Shrine grounds, listening to the Mass over loudspeakers and watching on television.
In his sermon, Burke described the church as a place of pilgrimage and told the story of St. Juan Diego’s visions of Our Lady of Guadalupe in 1531 in Mexico.
“The mother of God desired that a chapel be built, to which she would invite her children to come on pilgrimage,” he said.
[...]
Those in attendance included Bishop Jerome Listecki, head of the La Crosse Diocese, Cardinal Justin Rigali of Philadelphia, Francis Cardinal George of Chicago, and Bishop April Ulring Larson, head of the La Crosse Area Synod of the Evangelical Lutheran Church in America.
EWTN cameras were located throughout the church, and the Mass was broadcast by the Catholic television network.
[...]
In his homily, Burke said Our Lady of Guadalupe continues to exercise her maternal care.“Millions of infants in the womb have been destroyed through the legalized practice of procured abortion,” he said. “Our Lady of Guadalupe leads us to Christ who reveals to us ... the inviolable dignity of every human life, from the moment of its inception to the moment of natural death.”
An anti-abortion culture is part of the shrine’s milieu.
A devotional area to the unborn is still being completed near the church, and anti-abortion bumper stickers could be seen on cars in the parking lot Thursday.
[...]
In his homily, Burke talked about Our Lady of Guadalupe as pointing the way to Christ.
“Returning to their homes, her pilgrims will be filled with new enthusiasm and new energy to live in Christ more perfectly,” he said.
No longer archbishop of St. Louis, Burke plans to move to Rome after mid-August, and said he plans to return to the shrine a couple times a year.
Posted by thetimman at 11:30 AM

Glorious.... simply glorious. If you are reading this, check out the elegnat beauty of the shrine pictures.
There is a lovely St. Gianna altar as well.
Archbishop Burke is truly a good and faithful servant.