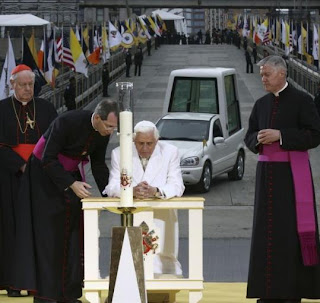 Priests who are accorded Papal Honors are considered honorary members of the papal household. This honor is bestowed for the lifetime of the recipient and is conferred with a diploma issued by the papal Secretariat of State.

The title of Protonotary Apostolic Supernumerary is considered to be the highest of these honors. The bearer is entitled to wear distinctive dress similar to that of a Prelate of Honor to His Holiness, i.e., a purple cassock and sash for liturgical dress, and a red-trimmed black cassock with a purple sash for non-liturgical dress.

Wonderful! I knew Father Gregory when I was younger. He was the pastor of Blessed Teresa of Calcutta (formerly Good Shepherd). He Was at my confirmation, and buried my grandfather. Cant think of a better man to be honored. Almost brought a tear to my eye. My grandfather used to say all the time "That man is going to be a monsignor someday". Grandpa must be smiling today :) Congrats Father Mikesh if you read this, Patrick Finley, Ben La Face's Grandson

Wow! The pastor of our Parish is on this list AND the priest that gave the homily at our newly ordained priest's Thanksgiving Mass (who will be doing a retreat for us homeschooling moms in 2 weeks)!

Now, for the *not so well-informed/knowledgeable side of me* what exactly "happens" to those named Chaplain to His Holiness? Is it like a promotion with a new title and things don't change much? Timman, can you expand on that?

The newly named 'monsignori' haven't received a promotion, or a salary increase. They now have the right to purchase new clerical garb with purple trim.

These are simply honorary titles that are intended to give special recognition to priests who have done some particularly good work that their (arch)bishop appreciates. No doubt Archbishop Burke placed these priests' names on the "purple list" as a parting gesture of fraternal kindness.

I know of several priests who have refused the honor, citing their concern that it would be misinterpreted by their parishioners. The problem with this sort of thing is that Catholics whose pastors do not receive the title get angry that their guy was unfairly 'dissed' by the hierarchy.

In any event, I am happy for the new monsignori. I am sure they all deserved the honor.