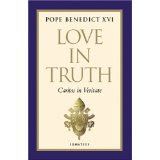 The Holy Father's new encyclical, Caritas in Veritate, is expected to be available this month. It concerns the theological virtue of Charity and its relation to the Truth, thus completing the general theme of his first two encyclicals on Charity and Hope, Deus Caritas Est, and Spe Salvi.
The title of the new encyclical (Charity in Truth, or, Love in Truth) is quite similar to the motto of the the Institute of Christ the King Sovereign Priest, which has done so much good work in St. Louis in the past 4+ years-- Veritatem Facientes in Caritate, or, Live the Truth in Charity. This approach to the living out of the faith, and to the transmission of the faith, emphasizes the intrinsic connection between the truth and true Christian charity.
This connection was so wonderfully visible in the pastoral care of Archbishop Burke. And while adherence to the truths of the Catholic faith is misunderstood, often deliberately, by some, it is vital to true love of neighbor. The truth is sometimes said to be divisive-- but of course by definition those who accept the truth and those who reject it are in some sense divided. The real issue is not whether there is some faux veneer of unity and inclusiveness, but rather whether or not we have unity with Christ Himself.
Ignatius Press is accepting orders for the encyclical. Below is a blurb from their page:
Pope Benedict’s third encyclical, Love in Truth (Caritas in Veritate), applies the themes of his first two encyclicals —love and hope (God Is Love, Saved in Hope) — to the world’s major social issues. Drawing on moral truths open, in principle, to everyone (the natural law) as well as on the teachings of the gospel (revelation), Pope Benedict addresses Catholics and non-Catholics alike, challenging us all to recognize and then to confront the social evils of our day.
The first part of the encyclical examines the dynamic teaching of Benedict’s predecessors, Pope Paul VI and Pope John Paul II. Both men contributed greatly to the body of doctrine known as “Catholic social teaching”. Both men challenged the simplistic division of political perspectives into “conservative” and “liberal”, and “right” and “left”. Both men were convinced that the natural moral law and the teaching of the Gospel were indispensable for a world in desperate search of hope and meaning.
In the second part Benedict surveys the social issues that confront the human race today—assaults on the dignity of the human person such as the attack on human life, poverty, issues of war and peace, terrorism, globalization, and environmental concerns. Benedict provides sound moral principles to address these social and economic problems, and to promote a culture of life and genuine peace.
Posted by thetimman at 8:02 AM