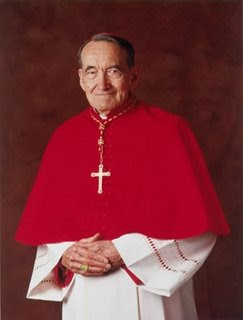 August 24, 1918 - December 12, 2008
Cardinal Dulles on Apologetics:
"...In a pluralist society like our own, religious faith is felt to be divisive. To avoid conflict Christians frequently take refuge in the excuse that people should be left free to make up their own minds about what to believe. After all, they say, no one can be argued into faith. Even to raise the question of truth in religion is considered impolite.
This withdrawal from controversy, though it seems to be kind and courteous, is insidious. Religion becomes marginalized to the degree that it no longer dares to raise its voice in public. This privatization has debilitating consequences for the faith of believers themselves. If we do not consider that it is important for others to hear the Christian proclamation, we inevitably begin to question its importance for ourselves. The result is a massive loss of interest in religious teaching. The reluctance of believers to defend their faith has produced all too many fuzzyminded and listless Christians, who care very little about what is to be believed. Their halfhearted religion is far removed from that of the apostles and the martyrs. It is a degenerate offspring of authentic Christianity.
Recognizing that faith is enfeebled if its rational grounds are denied, committed Christians are today returning to apologetics..."
(From "The Rebirth of Apologetics", First Things, May 2004)
Posted by thetimman at 1:04 PM

I, too, love St. Louis. In fact, my wife and I have thought many times about moving there and immersing ourselves in the great Catholic culture of the city. And, go Cardinals!

Would you mind listing my blog in your blogroll? I will be adding yours to mine, too.