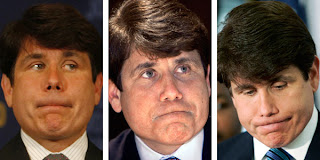 This really is appalling.  This has nothing to do with political parties, but rather the integrity of the make-up of the Senate.  From Lifesite News:

December 9, 2008 (LifeSiteNews.com) – Illinois governor Rod Blagojevich, one of the most staunchly pro-abortion politicians in the U.S., has been arrested on corruption charges, including, most prominently, conspiring to sell the senate seat recently made vacant by Barack Obama’s election to the presidency. According to Illinois law, the governor has the sole authority to fill the empty seat.In conversations overheard on wiretaps, Blagojevich sought to “sell or trade Illinois’ United States Senate seat vacated by President-elect Barack Obama for financial and personal benefits for himself and his wife,” according to the government affidavit on the case.

One scheme Blagojevich cooked up involved an attempt to trade the senate seat for a position as the Secretary of Health & Human Services in President-elect Barack Obama’s administration. Another involved selling it for positions for his wife on lucrative corporate boards.

The affidavit on the case says that during one call Blagojevich stated, "Unless I get something real good for [the senate seat], s--t, I'll just send myself, you know what I'm saying." He later said, "I'm going to keep this Senate option for me a real possibility, you know, and therefore I can drive a hard bargain. You hear what I'm saying. And if I don't get what I want and I'm not satisfied with it, then I'll just take the Senate seat myself." He added that the senate seat "is a f-ing valuable thing, you just don't give it away for nothing."

The Illinois Governor is well-known to pro-life activists for his extreme pro-abortion stance.

In 2006, after members of the legislature sought to overturn his executive order, he made known his intent to veto any bills that would have protected the conscience rights of doctors and pharmacists.

In a 2006 State of the State address, Blagojevich said, "Now, I understand that several bills have been introduced that would overturn my executive order to protect women's reproductive freedoms … So let me make something else very clear -- if any of those bills reach my desk, they are dead on arrival."

Also in 2006 he boasted to the Windy City Times, “I’m the only candidate in this race who is 100 percent pro-choice.”

He further explained, “Think about what we’ve been able to do since I’ve been governor. The reproductive freedoms of women are more protected in Illinois than any state in America. That’s in [stark] contrast to the advances and assaults coming from the Bush administration of Washington. We passed a law under my leadership to make insurance companies fill female contraceptives. Illinois had never done that before and we passed that law.”

In recent weeks the Illinois governor has garnered the praise of Planned Parenthood and other abortion-promoters by writing to the Secretary of the Department for Health and Human Services. In that letter he expressed his strong disapproval of a proposed Bush administration regulation that threatens health-providers with the loss of government funding if they do not protect the conscience rights of their health care workers.

“This is a sad day for government,” he said at a news conference. “Gov. Blagojevich has taken us to a truly new low."

"It is conduct that would make Lincoln roll over in his grave."

To read the government affidavit: http://dig.abclocal.go.com/wls/documents/blago_complaint.pdf

Posted by thetimman at 7:34 PM

Not to defend this creep, but what does his pro-choice stance have to do with the corruption charges he faces? While I find both aspects of his record very problematic, I don't like this kind of journalism, which indirectly implies that other pro-choice folk, by way of this misguided stance, corrupt. That's not logical and does not serve the interests of the pro-life cause. It just confirms the stereotype that we're all religious quacks.