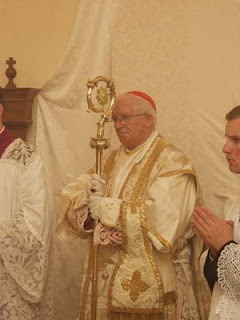 As it says it all, I am lifting this story entirely from New Liturgical Movement:
As first mentioned on the NLM in June and last a few weeks ago, Cardinal Antonio Cañizares Llovera, until now Archbishop of Toledo and Primate of Spain, has today been appointed by the Supreme Pontiff as the new Prefect of the Congregation for Divine Worship and the Discipline of the Sacraments. He succeeds Card. Francis Arinze whose resignation due to having reached the canonical limit of age the Pope accepted simultaneously.

Source: Bollettino of the Holy See Press Office of today.

Cardinal Cañizares (pictured to the right; the image is from the ordinations to the priesthood for the Institute of Christ the King in 2007) is known in Spain as "little Ratzinger", and has closely worked together with Pope Benedict in the Congregation for the Doctrine of the Faith since becoming a member in 1995, at the age of 50. The Cardinal is also a member of the Pontifical Commission Ecclesia Dei since 2006. Those who have supported the idea of Ranjith becoming prefect of the CDW have also reacted extraordinarily positively at the suggestion of Cardinal Cañizares being potentially appointed to this position. Everything considered, it sounds as though we can expect much that is very good from the Cardinal.
This is excellent news for the reestablishment of the traditional liturgy throughout the universal Church and for a serious treatment of the abuses so common in the ordinary Form, in line with Sacrosanctum Concilium and organic development.
Posted by thetimman at 7:29 AM