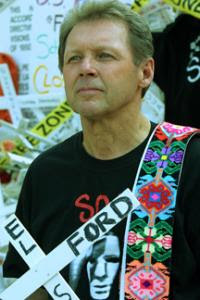 The ultra-lefty National Coalition of American Nuns gives its full support to disgraced priest Roy Bourgeois, who attended a women's sorta-nation ceremony and refused calls from the Church to repent.  Yes, that's him, a Roman Catholic priest, pictured at left.  He faces excommunication, but the angry gray line loves him.  I couldn't resist a few edits for accuracy's sake, in green, below.
From 2theadvocate.com:
(Some) Nuns back priest in ordination flap
A Lutcher-born Catholic priest facing excommunication from the Roman Catholic Church for his public stance advocating ordination of women priests has recently received the support of 113 nuns.

In a Dec. 12 letter written to the Vatican, the Detroit-based National Coalition of American Nuns criticized the threatened discipline of the Rev. Roy Bourgeois, a Maryknoll priest, saying it “has diminished our Church (in our minds).”

The letter continues: “Roy is now a prophetic voice (code word for espousing heterodox or heretical, non-Catholic beliefs) in our church because of his support for women’s equality in all Church ministries. Excommunications depend not on edicts or laws, but on compliance.

“We do not believe Roy is outside the community, and we embrace him wholeheartedly.  We also believe robots are stealing our luggage.”

Bourgeois told The Advocate in early November that the Congregation for the Doctrine of the Faith on Oct. 21 gave him 30 days to recant his belief and public statements or be excommunicated, or banished from the church.

However, Bourgeois said, he would remain steadfast in his convictions and would not back down from his public statements.

The controversy began in early August when Bourgeois attended a(n) pretend ordination service  for a woman pretending to become a priest and  preached a homily.  Of course, the controversy's roots in the lack of formation this priest received in his training and ministry will not be covered by this news outlet.

Vatican officials have not announced any official steps taken against Bourgeois.

Bourgeois could not be reached this week by phone at his office in Columbus, Ga.

Church leaders like Jesus Christ, St. Peter, an unbroken succession of Popes for two millenia, as well as the constant Sacred Tradition, the Church Fathers, and evidence from Scripture maintain that the priesthood is reserved for men, and, in May, the Vatican insisted that it is properly following Christian tradition by excluding women from the priesthood.  See, when we use words like "maintain" and "insist", it makes these "leaders" seem pretty arbitrary.

As a result, the Vatican issued a new warning that church members taking part in ordinations of women would be excommunicated.

In a news release discussing the National Coalition of American Nuns’ letter defending Bourgeois, Dominican Sister Donna Quinn, one of the coordinators (see, no hierarchical structure here, just coordinators, like any socialist entity), said the proposed punishment of the priest is not in line with the modern church.  Boy, is she right about that.

“The medieval punishment (anti-Catholic style book, point 8:  using the term medieval makes them look bad!) of excommunication serves only to embarrass our Church in the eyes of the world (Obama for Pope!) and fuels further anger and resentment among the U.S. faithful,” Quinn  said.  This statement amounts to a rare admission by heterodox nuns that they are the party of anger and resentment.  Why hate, Sister?

Bourgeois, a priest for 36 years, graduated from the University of Louisiana at Lafayette and served as a U.S. Navy officer for four years — two years at sea, one year at a NATO station in Europe, and one year of shore duty in Vietnam, receiving the Purple Heart.  He is therefore to be considered morally superior to the medievalists at the Vatican.

After military service, he entered the seminary of the Maryknoll Missionary Order.

He is best known for founding SOA Watch, an organization that seeks to close the U.S. Army School of the Americas, now called the Western Hemisphere Institute for Security Cooperation, at Fort Benning, Ga.  See, it's all political!  Just because Karl Marx is a more important figure to this crowd than the Savior of the World, the Church wants to persecute him.

According to the SOA’s Web site, Bourgeois has spent more than four years in federal prisons in the United States since 1990 on convictions for nonviolent protests against the U.S. military’s policy of training Latin American armed forces members.  Maybe it was prison that warped him.  We just don't know.

Posted by thetimman at 8:39 AM

I think this unhappy priest is part of the failure of seminaries in the 60 - 80's to weed out the men who didn't truly have vocations to the priesthood.

The tide is changing after the church realized their error when this generation of priests abused not only the liturgy, but alter boys.

It is uplifting to meet the dedicated, truly Catholic men in the seminaries today.

Thank you, all of you FAITHFUL SEMINARIANS, the church needs you as much as it needed the holy saints who reformed the church when it was in need.

I propose that the reason we have these women's ordination incidents and sympathy for them among many, is that virtually the whole Catholic Church, including most bishops, have partly adopted the ideology of modern feminism, as evidenced by their abandonment of the Bible's clear and consistent teaching of the Headship of the Husband in the family (aka, Patriarchy).

It is hard, logically, to maintain and justify a male only priesthood when the leaders of the Church, and most of its lay people, have a fierce hatred (or at least firm rejection) of a clear teaching of Scripture (Headship of the Husband).

They've replaced Headship of the Husband with a "Totally Equal Partners" concept.

So if women are totally equal partners in the family in the home, why not in the larger "family" in the parish and diocese?

That's the logic these dissenters on women's ordination have, and it is pretty compelling, if you assume the validity of the premise that women are totally equal partners in Catholic marriage and that men, as husbands, have no special role of Headship.

Even more deeply, what is really being contested is the Headship of Jesus Christ over the whole Catholic Church.

These dissenter really want a complete democracy in the Catholic Church, as in the Episcopal Church, the United Church of Christ, the United States of America, the Sierra Club, etc.

The only thing that varies is obedience and fidelity to it.

God blesses the obedient today as He has in all time, and will in all times.

So, really, everything is okay.

Except for the fact that some church leaders are somewhat preventing people from seeing, knowing and loving the Whole Truth.

But I have confidence that Archbishop Burke, Bishop Hermann, and Pope Benedict are working to correct these things.

Didn't Jesus exhort us not to worry about so many things? (Matt. 6:25)

I prefer the term "faux-dination."

Maybe there will be a Christmas grace of repentance for Fr. Bourgeois, I mean, can it hurt to pray for that?

Whenever you add your own edits or emphases to an article, you always put a smile on my face.

Thanks for the work that you do!

Thanks, Fenian. Usually, these musings are my second take on these stories-- the first is a spit-take.

Fr. Andrew, Merry Christmas; yes it is worth praying for. Miracles happen, and Christ came to save me from a life of sin, too.

Tom, ah, strident as ever, eh? I agree with the premise, properly understood, but I sure hope a food fight doesn't break out over this one!

Merry Christmas to all.

To paraphrase Arlo Guthrie about the .2% support; "We've got ourselves a movement! The Alice's Restaurant anti-excommunication movement. And, all you have to do to join is to sing along the next time it comes around. With feeling."