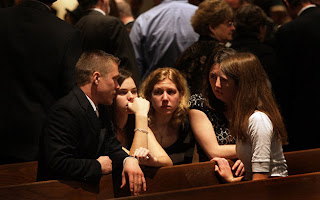 I am sorry I didn't post this story sooner-- I had some unexpected work.  This story from STLToday puts the capstone on the John-Paul Forget story.  The photo is by Laurie Skrivan of the P-D.  God has a plan that we do not always understand.  Pray for the soul of this young man who touched the lives of so many people :
John Paul Forget remembered as son, friend and devoted Catholic
By David Hunn
ST. LOUIS POST-DISPATCH
12/28/2008
WILDWOOD — More than 600 people filled a church here Saturday morning to remember John Paul Forget, a big-hearted college student, a fervent Catholic and the eldest son of 13 siblings.

Forget, 20, has been missing almost two weeks, after falling into the Missouri River after an accident on Interstate 70 as he headed home with college friends for Christmas break.

Saturday, friends and family revisited both his life and his presumed death.

Lober said it had been snowing that day, but roads were mostly clear, until they got to the I-70 bridge over the Missouri River, about 15 miles west of Columbia.
Then, he said, a small bump and a patch of black ice in the bridge's roadway started a chain reaction:

The car began to spin, and struck the concrete bridge railing on the right. A tractor-trailer then hit the car's front corner, sending it — with Forget praying aloud inside — into the divider again.

About halfway across the bridge, the car came to a stop, facing traffic.

Two more sets of headlights were bearing down on them. "Everyone says, 'Get out! Get out!'" Lober said. "But the bridge is so narrow, there's nowhere to go."

Mary Agnew, of Appleton, Wis., stayed inside the car. Laura and Rachel G'Sell, 18-year-old twins from Lake Saint Louis, got out and huddled against the railing.

Lober jumped over it, grasped the concrete bridge rail and hung by his hands over the river.

At that point, another truck hit Lober's Jeep.

Lober pulled himself back up. The girls, he said, were against the railing, looking down into the river.

And they were screaming. Lober ran over. From far below, they could hear Forget.

Family and faith, Michael said, are now his comfort.

Both were present Saturday morning. Mourners lined the sanctuary walls and spilled into the foyer at St. Alban Roe Catholic Church.

More than a dozen priests arrived to support the family.

Administrators, teachers and students drove in from Benedictine.

Friends told tales of a young man willing to stay up late into the night talking, and of a friend willing to give up his time to help baby-sit for others.

Family described a son who calmly brothered his siblings, who cooked family dinners — even for 30 — and who adventured with them on Sunday outings into the Missouri woods.

And they all spoke of his faith.

His college friends said he still attended Mass nearly daily. His uncle read of Forget's devotion from the young man's own journal. And his sister said that, though her brother wrestled with his life and vocation, he had few doubts about God.

A faith, friends remarked, that stayed true to the end.
Posted by thetimman at 7:34 PM

My heart ached when I read the details of the accident and couldn't help but wonder what the other people with him were feeling/thinking as it was happening. What a nightmare! Thanks be to God his family (and him) have their Faith, may they find comfort in our Lord.

We have been keeping their family in our Rosary intentions daily.

John Paul Forget's body has been located reports KSDK.com
"Body of missing Chesterfield man found south of Columbia, Missouri"
http://www.ksdk.com/news/local/story.aspx?storyid=170393&catid=3
God bless him and all who love him. May he rest in peace. 3/21/2009