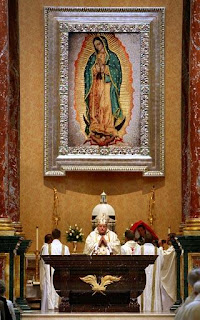 Just thought I would be the first to accurately describe St. Stanislaus' situation in the eyes of the Church.
In any event, the legal team for St. Stan's in the ongoing civil lawsuit will depose (and not in the way they'd like) Archbishop Burke in La Crosse this week. When he speaks truthiness to lawyers, will they react with a "Quid es veritas?" I really hope someone brings up the towing company.
As an aside, George von Stamwitz, one of the lawyers, has some interesting ties to the so-called Ecumenical Catholic Communion.
From STLToday:
Burke to be deposed by St. Stanislaus lawyers this week
By Tim Townsend
St. Louis Post-Dispatch
Former St. Louis Archbishop Raymond Burke is scheduled to be deposed by lawyers for St. Stanislaus Kostka Church on Thursday.
The deposition is part of an ongoing legal battle between the St. Louis Archdiocese and the historically Polish church just north of downtown St. Louis.
George von Stamwitz, attorney for St. Stanislaus, said Monday that he was waiting for more documents from the archdiocese, but that two litigators for his firm would be traveling to Wisconsin to take Burke’s deposition.
Bernard Huger, an attorney for the archdiocese, confirmed that Burke was due to be deposed this week.
Burke is scheduled to be in La Crosse this week for events surrounding the Dec. 12 feast day of Our Lady of Guadalupe at the shrine he founded near his hometown.
In July, the archdiocese and former St. Stanislaus parishioners, including former board members, sued the church, asking a judge to restore the structure that existed before its board re-wrote the bylaws in 2001, then again in 2004, eventually eliminating the archbishop’s authority.
In the church’s original bylaws, its lay board controlled the property and assets while the archbishop appointed its board members and a pastor.
In such an arrangement, the St. Louis archbishop would once again have authority - via his board appointments - over St. Stanislaus. But the church would still have a corporate structure that puts it outside canon, or church, law.
Von Stamwitz, an attorney with Armstrong Teasdale in St. Louis, would not say what questions his colleagues would be asking Burke. In June, Pope Benedict XVI named the archbishop to head the Vatican’s supreme court making him one of the most powerful Americans in the Catholic church.
The St. Louis archdiocese is one of eight dioceses - and the only archdiocese - currently without a bishop in the U.S. church. Bishop Robert Hermann is the interim head of the archdiocese.
Posted by thetimman at 1:49 PM

Ah, if only everyone could so clearly define the situation...

"But the church would still have a corporate structure that puts it outside canon, or church, law."

Gotta love when people only use half the facts. The original bylaws also require that the archbishop and board members maintain the parish in conformance with the laws of the Catholic Church. As the laws of the Church changed (via the 1917 and 1983 Codes), the Board was required to be changed (which it clearly was not). Thus, when the Board is reconstituted, one of its first acts must be to put it in conformance with Church law. So yes, it may be outside canon law, but only for a very brief period.

It is easy to see who is on the side of TRUTH. We will also be making the four hour drive up to WI tomorrow so as we may give the Archbishop our love and support. After watching the USCCB discuss 'global warming' at their last meeting and with the United Nations, when we are killing 4,000 innocent babies every day here in our country, it makes me think that the Archbishop may be the 'Lot' figure in this land of Sodom. I beg all of my fellow Catholics to tithe directly with the Pope in Rome until our Bishops become obedient to Our Holy Father and to the Gospel of life. It's not about the 50 million children that we've killed since Roe, IT'S THEIR CHILDREN! May God have mercy on us all! God bless our Holy Priests and God help the rest. PS. IF THEY WERE ABORTING BISHOPS AND CARDINALS, THEY WOULDN'T BE RECEIVING HOLY COMMUNION! ~ Msgr. X

I can't fathom what the Stan's lawyers think they can drudge up in a deposition.

However, we should count one small victory vis a vis the Post Dispatch. Townsend was willing to finally un-veil (no pun intended) a fact he has kept hidden through most of his two year coverage. He wrote that the Archdiocese is asking "a judge to restore the structure that existed before its board re-wrote the bylaws in 2001, then again in 2004, eventually eliminating the archbishop’s authority."

Finally an admission in print that St. Stan's violated their own by-laws in re-writing them without the Archdioce's permission.

At the heart of this case is the further contention (See YOUNGSTLCATHOLIC) above that the
original contract stated that the board maintain the parish in conformance with the laws of the Catholic Church.

That goes to Bozek and the "new religion" at Stans. If the Archd. can prove that Stan's is no longer Catholic (not hard) then the board has violated a contract.

NOW ALL YOU LAWYERS LISTEN UP AND POST BACK TO ME ON THIS. I'M AN AMATEUR.

I'm not a lawyer but I've sued and been sued enough to know that when you have a tort violation the usual turn is to talk of "rememdy". In other words restitution, or some other solution.

I would not be surprised, St. Louis Catholics, if a court orders the Stan's board to buy the Archdiocese out of her encumbrance, or lien as it were on the real estate.

Again, I'm asking for lawyers to jump in here.

The original contract reads a lot to me like what real estate lawyers call a "life estate" whereby a party has an interest in real estate without owning it. The interest is a limitation on the use of the real property. If an owner of real property fails to honor the "interest" of the holder of the "life estate" or easement, or encumbrance I think he can be sued to pay hard cash to the violated party.

I'm wondering aloud whether that's not where this will go.

THen we will see just how much of that fabled liquidity of St. Stans is just a joke the bookkeepers tell the press.

Will St. Stan's board have the Archbishop's car towed?