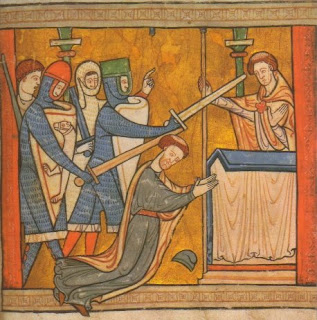 A day late, but hopefully not a dollar short-- I wanted to share some reflections on the martyrdom of St. Thomas a Becket, Archbishop of Canterbury during the reign of Henry II of England. He was murdered in the Cathedral by agents of the King on December 29, 1170.
The following brief excerpts come from the entry for St. Thomas in The Liturgical Year, by Dom Prosper Gueranger, which my lovely wife was kind enough to give me for Christmas and which I cannot recommend highly enough. The whole article merits close reading, but the following excerpts I find highly relevant to situations of note in our Archdiocese, our country, and the universal Church:

"...This glorious Martyr did not shed his blood for the faith; he was not dragged before the tribunals of pagans or heretics, there to confess the truths revealed by Christ and taught by the Church. He was slain by Christian hands; it was a Catholic King that condemned him to death; it was by the majority of his own brethren, and they his countrymen, that he was abandoned and blamed. How then, could he be a Martyr?... He was the Martyr for the liberty of the Church."
"Every Christian is obliged to lay down his life rather than deny any of the articles of our holy Faith; it was the debt we contracted with Jesus Christ when he adopted us in Baptism as His brethren. All are not called to the honour of Martyrdom... but all must so love their Faith as to be ready to die rather than deny it, under pain of incurring the eternal death from which the grace of our Redeemer has already delivered us. The same obligation lies still more heavily on the Pastors of the Church..."
"...beyond this, Pastors have another debt to pay, which is that of defending the liberty of the Church. To Kings and Rulers, and, in general to all diplomatists and politicians, there are few expressions so unwelcome as this of the liberty of the Church; with them it is a sort of conspiracy. The world talks of it as an unfortunate scandal, originating in priestly ambition. Timid temporizing Catholics regret that it can elicit anyone's zeal, and will endeavour to persuade us that we have no need to fear anything so long as our Faith is not attacked. Notwithstanding all this, the Church has put upon her altars the glorious St. Thomas of Canterbury, who was slain in his Cathedral in the twelfth century because he resisted a King's infringements on the extrinsic rights of the Church. ... the very same doctrine she would have taught by St. Gregory VII, in the eleventh century: The Church, the spotless Spouse of Jesus Christ the immaculate Lamb, is by God's appointment FREE, and subject to no earthly power."
"Such is the Liberty of the Church. It is the bulwark of the Sanctuary. Every breach there imperils the Hierarchy, and even the very Faith. A Bishop may not flee, as the hireling, nor hold his peace... He is the Watchman of Israel: he is a traitor if he first lets the enemy enter the citadel, and then, but only then, gives the alarm and risks his person and his life. The obligation of laying down his life for his flock begins to be in force at the enemy's first attack upon the very outposts of the City, which is only safe when they are strongly guarded."
"...Hence it was that St. Thomas, and the rest of the martyrs for ecclesiastical liberty, never once stopped to consider how it was possible, with such weak means as were at their disposal, to oppose the invaders of the rights of the Church. One great element of Martyrdom is simplicity united with courage... God has put into the heart of a Christian a capability of humble and inflexible resistance which makes every opposition give way."

"Fortitude, as the world understands it, is undertaking great things; according to the Church, it goes not beyond suffering every sort of trial, and there it stops.... [St. Paul] does not say, 'You have not attacked your enemies and shed their blood;" but, "Your resistance to your enemies has not yet cost you your blood.'"

"[St. Thomas] can in all truth say to Henry, King of England, what Tertullian said in the name of the whole Church to a magistrate of the Roman Empire, who was a cruel persecutor of the Church: We neither frighten thee nor fear thee: we Christians are neither dangerous men, nor cowards; not dangerous, because we cannot cabal, and not cowards, because we fear not the sword."
"... The tomb of the Saint will become an altar; and at the foot of that altar, there will one day kneel a penitent King, humbly praying for pardon and blessing. What has wrought this change? Has the death of Thomas of Canterbury stirred up the people to revolt? Has his martyrdom found its avengers? No. It is the blood of one who died for Christ producing such fruit. The world is hard to teach, else it would have long since learned this truth, that a Christian people can never see with indifference a pastor put to death for fidelity to his charge; and that a government that dares to make a martyr will pay dearly for the crime. Modern diplomacy has learned the secret; experience has given it the instinctive craft of waging war against the liberty of the Church with less violence and more intrigue-- the intrigue of enslaving her by political administration. It was this crafty diplomacy which forged the chains wherewith so many churches are now shackled, and which, be they ever so gilded, are insupportable. There is one way to unlink such fetters-- to break them. He that breaks them will be a martyr: he will not have to fight with the sword, or be a political agitator, but simply to resist the plotters against the liberty of the Spouse of Christ, and suffer patiently whatever may be said or done against him."
"... how truly [the Church] may say with the Apostle: When I am weak, then am I powerful..."
St. Thomas a Becket, Bishop of Canterbury and glorious Martyr, pray for us!
Posted by thetimman at 9:03 AM

. . .and Timman thinks a Catholic Monarchy is the best. I prefer not to depend on one person to have all power. God is my king.

Our system of Government, if the Constitution is adhered to as it should be, offers the most protection and opportunity for it's citizens.