Pope: Democracy Is Not Enough 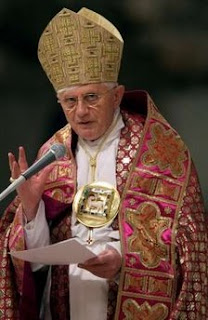 Affirms Need for Values Founded on Truth of Person

VATICAN CITY, DEC. 21, 2008 (Zenit.org).- Despite the value of democratic principles, they alone are not enough to form a solid foundation for a society, says Benedict XVI.

The Pope said this Thursday upon receiving in audience Pio Bosco Tikoisuva, the new ambassador of Fiji to the Holy See.

In his address the Pontiff praised the democratic system for giving "a voice to all the different sectors of society and encourages shared responsibility."

He recalled that a key principle for a Christian "view of social and political organization is the virtue of solidarity, through which the different elements of society work together to achieve the common good of all, thereby producing what my predecessor Pope Paul VI so beautifully described as a 'civilization of love.'"

Quoting his encyclical "Spe Salvi," the Holy Father said "the moral well-being of the world can never be guaranteed simply through structures alone, however good they are."

"Democracy on its own is not enough, unless it is guided and enlightened by values rooted in the truth about the human person," said Benedict XVI. He said it is in promoting values that the Holy See can "make an important contribution to the common good."

"While governments take responsibility for the political ordering of the state, the Church unceasingly proclaims her vision of the God-given dignity and rights of the human person," he added.

"It is on this basis that she urges political leaders to ensure that all their people can live in peace and freedom, without fear of discrimination or injustice of any kind," the Pope explained. "She urges civil authorities to guarantee the most fundamental of all rights, namely the right to life from the moment of conception until natural death.

Quoting "Cenesimus Annus," the Holy Father said "the synthesis of all these rights is found in religious freedom, understood as 'the right to live in the truth of one’s faith and in conformity with one’s transcendent dignity as a person.'"

Posted by thetimman at 6:53 AM

"the moral well-being of the world can never be guaranteed simply through structures alone, however good they are."

America is not set up as a pure democracy but a republic, yet even if she were to return to those roots, to the way the founders intended, as so many constitutional conservatives would like to see, today's moral bankruptcy would ensure failure.

That is why the split between the social and the fiscal and the constitutional conservatives is such a dead end. Without the recognition of God as the giver of rights and the Natural Law (at minimum) as a track to run on, the foundation of the great experiment is gone, and despite being the best system of government ever devised, as Benedict says, the system is not enough.

JESUS DID NOT COME TO SET UP A "CIVILIZATION OF LOVE"

Does that surprise you? Think a minute.

Jesus came to establish a CHURCH of love.

When you read the New Testament, it is COMPLETELY clear that He always assumed that the general civilization, which the New Testament calls "the world," would always be hostile to His Church. All the great saints have always upheld this view.

The whole point of Christ's Church is that the Church is where those being saved are called OUT of the general society, into a community (or civilization) of love.

Through missionary work, Christ's Church brings all willing persons into the community of love which is the Church.

This confusion in the modern Church between Christ' Church and the lost world is at the core of the "crisis" in the Church that many in the Church have been talking about, including the priests of the Institute of Christ the King Sovereign Priest.

Catholics! We need to return to the traditional doctrine of the Church and the World.

We need to return to Classical Catholicism.

The great experiment in "Updating" has been a big belly flop! Time to return to the time-tested theology.

I thank this blogger for posting this article about democracy.

I am no fan of the Hitler's Germany or Hirohito's Japan. I'm glad we put those regimes out of business.

Even Spain's Franco did or permitted some things that a Catholic leader never should have. (He did much good, too.)

But over 50 million babies have been LEGALLY murdered in the USA since 1973. Similar statistics pertain to the other Western democracies.

This doesn't count all the very early abortions caused by the birth control pill.

Democracy, as it is in the USA now, is a godless form of government. God will not bless it.

I think we need a Catholic monarch, just like King Louis the Ninth of France, after whom our favorite city is named.

I believe it is true that until the Vatican II Council, the Catholic Church always said that the most ideal form of government is the Catholic monarchy.

P.P.S. Here's a question for this blogger's secret canon law advisor: Does using the contraceptive pill cause you to automatically excommunicate yourself from the Catholic Church, since it is widely known that the pill causes very early abortions as one of its modes of operation, and since Canon Law says that anyone who willfully participates in an abortion is automatically excommunicated.

Absolutely Tom. But the world is awash in people who believe that the perfect system has yet to be devised, or yet to be implemented. They are secular humanists. And the Church is awash in Catholics who believe that social morality trumps creed and that if we were to hold hands with the rest of the world, the end of all things would be the perfect world here on earth and that was what Jesus was all about. The new age nirvana.

Sometimes, as C.S. Lewis put it, the longest way around is the shortest way there. JPII gave them the goal, the Civilization of Love. Were it achievable it would be a great thing. Not only that, in keeping with Vatican II he described at least in part what it would be like. This is your goal, people of the world. This is what you are all so desperately trying to achieve and you will know you haven’t achieved it as long as there are human beings not accorded human rights, beginning with the right to life. Build your governments, build your systems, save the planet, advance your technology, but always know that you have not achieved the Civilization of Love until you meet the basic criterion of human dignity.

Yes, we do want a perfect world, filled with perfected human beings, and we know also that Christ redeemed the entirety of humanity. But any Catholic who has truly tried to be one of those perfected human beings realizes that the battleground is in his own heart first and that is the beginning of wisdom. For it becomes apparent that the primary task, before the structures and systems are put in place, is the evangelization of the world, including the Church herself. So we are back to where you would like us to be Tom, understanding that we are called out, to live in the world but apart from it, yet with a message for the entire world. Do you want peace? This is the way. Do you want sustainable prosperity? This is the way. Do you want to eliminate hunger? This is the way.

Will they listen? If the past is any indication, most will not. Jesus himself was plain about that.

Tom, I appreciate your fervor, but really, your rhetoric is too broad. When the Holy Father says that we need a civilization of love, there is nothing wrong or inexact about that. Yes, a civilization of love is made through Christ, and hence, through the Church. The Church itself is such a civilization. Holy Mother Church creates culture, authentic culture. She takes it and sanctifies it.

Grace builds upon nature. I can easily see such a civilization of love arising upon the triumph of Mary's Immaculate Heart when the Fatima consecration is complete, for instance. And perhaps by the growth in holiness of Catholics through less miraculous means.

As for democracy, it is not inherently evil. With respect, I think you lose a little credibility when you speak so absolutely. A democracy that acknowledges the Social Reign of Christ the King would be a moral form of government. The failure of any particular democracy in the moral sphere cannot condemn the form itself. Any more than the failure of a particular monarchy condemns that form.

All governments that acknowledge and respect the authority of God are within the possible. Regardless of my preference for one form of government over another, democracy or a republic could fit the criteria for a just government in the right conditions.

WHAT ABOUT ALL THE POPES WHO CONDEMNED DEMOCRACY?

Yes, the current pope and all the popes since about 1962 have praised and approved of completely democratic and completely secular forms of government.

But what is a Catholic to do with all the popes prior to 1962 who flatly and directly condemned governments that are completely democratic and completely secular?

Are those popes to be viewed as excommunicated posthumously for heresy?

Are all the Catholics who accepted the teaching of those earlier popes to likewise be viewed as excommunicated posthumously for heresy?

Really, what is a Catholic to do?

But is such a rule Catholic?

Now that John Paul II is deceased, do all of his teaching lose all their authority?

Yet, we seem to be required to do the same thing regarding the teachings of Pope Pius IX, and many other earlier popes.

There aren't any Catholic Monarchy's now, so your point is silly. But if you don't like our country or it's government, you can always move.