Saint Louis Catholic of the Year 2008 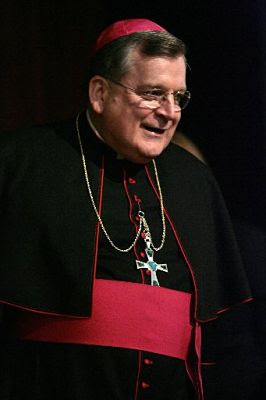 It is that time of year again when the writer of this blog must choose the Saint Louis Catholic of the Year Award. Last year's recipient, Archbishop Raymond L. Burke set a high standard, but this year's choice is equally well-qualified.
You see, this year's winner is none other than Archbishop Burke.
Even though his reign as Archbishop ended on June 27 with the announcement that the Holy Father named His Grace to be the new Prefect of the Supreme Tribunal of the Apostolic Signatura, he accomplished enough in that six month time period to claim the award:
Not a bad six months, I should say.  In fact, I think it would be most fitting to name this award after him-- from now on it will be known as the Archbishop Raymond L. Burke Saint Louis Catholic of the Year.
Some other finalists that merited consideration this year included the following:
Bishop Robert Hermann, for his steadfast leadership in the interregnum, continuing the policies of Archbishop Burke, pursuing the civil lawsuit against St. Stan's, declaring the excommunication of the new purported Board members, and boldly proclaiming the truth of Catholic teaching on human life in the election cycle.
Canon Karl W. Lenhardt of the Institute of Christ the King Sovereign Priest, for his leadership of the Oratory and his work as the Archiepiscopal Delegate for the Implementation of Summorum Pontificum in the Archdiocese of Saint Louis.
Father Noah Waldman, whose sermon on the horrors of the abortion genocide and the responsibility of Catholic voters brought attention to the stark choice in this election.
Unknown Canon Lawyer X, whose important article on the liturgical law and immemorial custom of head coverings not only refocused the debate, but will have an impact into the future as the Extraordinary Form spreads to more and more parishes, and into the mainstream of Catholic life.
Congratulations to Archbishop Burke and, more importantly, thank you to Archbishop Burke for your service to the Church.
Posted by thetimman at 1:50 PM

Nice choice. I pray that our next Archbishop will be from the same mold.

How could you overlook the Messiah himself who visited our fair city? On a chilly fall day, a multitude gathered around him on the hill by the water, under that great secular shrine reaching up to the sky. They heard great things said so greatly. The skies parted. A host of angels sang. And God said, it was good.

The One shall save us. Praise be to God.

Thank you for that. It made my day.

In the interest of impartiality, I must disclose that I am a strong proponent of the Messiah's unicorns and rainbows policy. Not to mention, fuzzy puppies for everyone.

THE TIMMAN SHOULD BE ST. LOUIS CATHOLIC OF THE YEAR

Why? Because this blog is being read by leading Catholics in St. Louis and all across the USA, and maybe even in other countries and the Vatican!

Tom, I appreciate the sentiment, but I trust you overstate the influence and readership of this blog.

I would like to say, though, that I have no objection, Your Holiness, to being named a lay Cardinal...

Oh Timman.... a lay Cardinal? Forgive my ignorance, but is there such a thing?

Theoretically, yes, but not since John XXIII made it a requirement for all cardinals to be ordained.

Am I wrong Tinman?

Still possible, but anon is right that none have been made in decades. Why not now? Why not me?

What an ambition. So what would be next? Will it be Pope Timman?