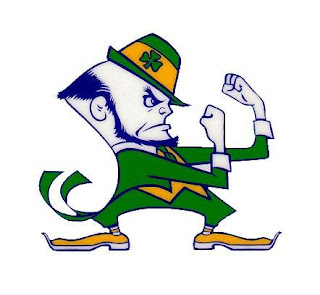 Thanks to the reader who sent me the link to this tongue-in-cheek take in the magazine Commonweal on Notre Dame football. Our Lady's team is down on its luck, of course-- but this was foretold by Our Lady of Good Success in the Seventeenth Century. The differing approaches of Cardinal George and Bishop Kicanas may interest Rocco Palmo:

Sunday Morning Quarterbacks
Can the bishops save Notre Dame football?
Christopher Ruddy
Chicago, Dec. 3 — The Administrative Committee of the United States Conference of Catholic Bishops (USCCB) will convene an emergency meeting here today to discuss the University of Notre Dame’s decision to retain its embattled head football coach, Charlie Weis.
The bishops are, by all accounts, divided internally on how to proceed. Some bishops believe that aggressive steps are needed to shake up the complacency that has settled in at South Bend.
They fear that, unless decisive and courageous action is taken, Notre Dame’s program will soon be indistinguishable from the rest of the college football landscape. Francis Cardinal George, USCCB president and archbishop of Chicago, said, “Three quarters just to get one first down against USC? Notre Dame football is in danger of becoming an exhausted project. It’s not a matter of whether we are ‘Holtz’ fans or ‘Parseghian’ fans or, heaven forbid, ‘Weis’ fans, but rather that we are simply Notre Dame fans united in our one father, Knute Rockne, in his only begotten son, George Gipp, and in the four evangelists—I mean, the Four Horsemen. I am disappointed that Notre Dame did not take the actions needed to restore its football program to fidelity and, therefore, greatness.” Cardinal George later clarified these remarks, stating that he was speaking only in his own name, and not as USCCB president.
The Most Rev. Gerald F. Kicanas, USCCB vice president and bishop of Tucson, said, “We bishops share a common vision but differ on the best means to realize that vision. We are unanimous in our conviction that something must be done. But, at this moment of great importance for the Church and the nation, we must not reduce the situation at ND to the single issue of Charlie Weis. Instead, we offer all Notre Dame football fans a moral framework with which they can properly form their consciences on this delicate issue. We are not telling anyone whom to fire or not to fire.”
Kicanas’s remarks resonated with those who counsel a more nuanced, consistent ethic of football, sometimes known as the “four-seamed pigskin” approach. Firing Weis, these prelates argue, would not have addressed the root causes of Notre Dame’s now decades-long mediocrity in football. “How can we support the Notre Dame administration so that they aren’t trapped in a downward spiral of hiring and firing?” asked one bishop, who asked to remain anonymous. “How can we foster a culture of football in which such firings are both unthinkable and unnecessary?”
Reaction to the bishops’ surprise meeting was immediate and varied. The Rev. John I. Jenkins, CSC, president of Notre Dame, issued a statement: “The Notre Dame community always welcomes the valuable insights of the American bishops, and we look forward to continuing our conversation. I have always believed that dialogues are better than monologues.”
[...]
Other commentators counseled caution. The Rev. Thomas Reese, SJ, senior fellow at the Woodstock Theological Center and former editor of America magazine, said, “Notre Dame administrators made up their own minds, and heavy-handed pressure tactics by the bishops will surely backfire. The best-educated Catholics in the history of the world just tune this stuff out.”
M. Cathleen Kaveny, professor of law and theology at Notre Dame, warned that the bishops needed to choose their tactics and words carefully: “Prophetic denunciations are satisfying in the short term, but they convince very few people and almost always fall flat in the end. We need a more pragmatic approach that respects the difficult, messy choices we all have to make. I think we need to ask ourselves, ‘What would Stephen Colbert do?’”
[...]
Posted by thetimman at 10:19 AM