Statement of the Holy See at the UN 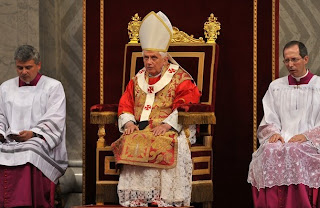 STATEMENT OF THE HOLY SEE DELEGATION AT THE 63RD SESSION OF THE GENERAL ASSEMBLY OF THE UNITED NATIONS ON THE DECLARATION ON HUMAN RIGHTS, SEXUAL ORIENTATION AND GENDER IDENTITY (18 DECEMBER 2008)

TESTO IN LINGUA ORIGINALE
The Holy See appreciates the attempts made in the Declaration on human rights, sexual orientation and gender identity –presented at the UN General Assembly on 18 December 2008- to condemn all forms of violence against homosexual persons as well as urge States to take necessary measures to put an end to all criminal penalties against them.
At the same time, the Holy See notes that the wording of this Declaration goes well beyond the abovementioned and shared intent.
In particular, the categories ‘sexual orientation’ and ‘gender identity’, used in the text, find no recognition or clear and agreed definition in international law. If they had to be taken into consideration in the proclaiming and implementing of fundamental rights, these would create serious uncertainty in the law as well as undermine the ability of States to enter into and enforce new and existing human rights conventions and standards.
Despite the Declaration’s rightful condemnation of and protection from all forms of violence against homosexual persons, the document, when considered in its entirety, goes beyond this goal and instead gives rise to uncertainty in the law and challenges existing human rights norms.
The Holy See continues to advocate that every sign of unjust discrimination towards homosexual persons should be avoided and urges States to do away with criminal penalties against them.
Posted by thetimman at 12:32 PM

CATHOLIC CHURCH IS OPPOSED TO ALL CRIMINAL PENALTIES FOR HOMOSEXUAL CONDUCT?

I'm sorry, this can't be a good idea.

This would mean that no government in the world could forbid a homosexual couple from openly and flagrantly living in sin together in an apartment, in a house, on a cruise ship, in a hotel room, in a dorm room, etc.

This would mean that homosexual couples would have to be allowed to go as a couple to the prom at high school, and so forth.