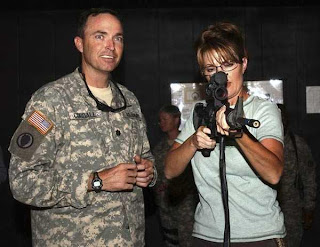 Anyone in St. Louis who has been semi-sentient in the last several months is aware that the North Side has been a killing zone.  The number of homicides has been high, but more than that, the brazenness of the murders has been shocking.  Whole neighborhoods are danger zones for law abiding citizens to walk in, drive in, live in.
Alderman Quincy Troupe has a suggestion for residents in these areas, but one that liberal democrats don't often go in for-- they should arm themselves.
From STLToday:
St. Louis Alderman Quincy Troupe calls on residents to carry handguns for safety
By Jake Wagman
ST. LOUIS POST-DISPATCH
12/02/2008
ST. LOUIS — Alderman Charles Quincy Troupe's neighborhood has seen nine homicides in 10 months this year, more than all but one other section of the city.

With gunplay wreaking havoc on his ward, Troupe thinks he has found an answer: citizens arming themselves.

The alderman is pleading with constituents to get guns of their own — and learn how to use them. Troupe, who represents a swatch of north St. Louis, is encouraging residents to apply for concealed weapons permits so they can start carrying a firearm.

The city's new police chief, among others, worries that introducing even more guns into high-crime areas is a recipe for greater turmoil, not less.
Troupe, however, says he has lost faith in the Police Department and is urging residents to take it upon themselves to protect their homes and property.

The state Legislature approved Missouri's "conceal and carry" law in 2003, even after voters rejected a referendum four years earlier allowing individuals to possess a hidden firearm.

Troupe, a former state representative, says he supported concealed weapons legislation while in Jefferson City, and supports it now.

He declined to say whether he carries a gun. He is encouraging others to do so because, he says, some parts of St. Louis are just too dangerous.

"You stop to help somebody that's in need of help, and you end up getting shot and killed," Troupe said, referring to the Nov. 5 slaying of St. Louis firefighter Leonard Riggins, shot during a carjacking by a someone he thought was a motorist in need of assistance.

Though the shooting was north of the city line, the teenage gunman also had been questioned in a murder in Troupe's ward.

Troupe is hoping to recruit residents from his 1st Ward and around the area to take a firearms safety course, a requirement to qualify for a concealed weapons permit. He has even made his pitch at City Hall — and he says several aldermen have expressed interest in obtaining a permit.

For now, he says he has a list of around 40 residents who have indicated they would like to take the weapons safety course. About 30 of them, he said, are women.

"They are being terrorized by this criminal element out here," Troupe said. "Their No. 1 priority is trying to keep their children alive. Their black, male children. And that's a Herculean task."

One north St. Louis woman who already has her concealed weapons permit — and a 9 mm handgun to go with it — is Vivian Jones, who knows Troupe and supports his gun push.

She has been robbed at gunpoint in her daughter's home in Troupe's ward. Just recently, she witnessed a gunfire exchange outside her business, a dry cleaners, in the city's Baden neighborhood, where she lives now.

For her 53rd birthday in June, Jones bought a handgun and began target practicing regularly — and she has the bull's-eyes to prove it.

Laws allowing residents to carry concealed weapons are the subject of passionate debate. Gun control advocates argue that they put communities at greater risk, while groups such as the National Rifle Association assert that "right to carry" laws have led to lower crime rates.

Even so, Troupe's bid may represent a certain desperation in parts of the city where crime has proved an intractable foe.

Last month, St. Louis was ranked No. 4 on a list of U.S. cities with the most crime — which is actually an improvement from two years ago, when St. Louis was No. 1.

Reports of property crimes and violent crimes in St. Louis were down over 10 percent in 2007 from the previous year. Car thefts dropped as well.

Still, this year, the murder rate continues to climb. Through October, the city recorded 148 homicides, more than all of last year. The Mark Twain neighborhood, where Troupe lives, is on pace to match last year's total of 11.

Jones, the Baden woman who began carrying a gun this summer, said residents need to do something instead of "keep being victims."

"I don't promote violence by any means. I'm a very spiritual person, and I believe in the power of prayer," Jones said. "But times just aren't like they used to be."
Posted by thetimman at 11:21 PM